After starting the day solidly in the green, Gamestop – along with other most shorted names – traded as high as $383 after Robinhood eased its trading limits over the weekend, which saw the brokerage effectively halt trading in as many as 50 stocks.

However, the early euphoria did not last long, and moments ago the stock tumbled as much as 34%, before getting halted after triggering a circuit breaker. 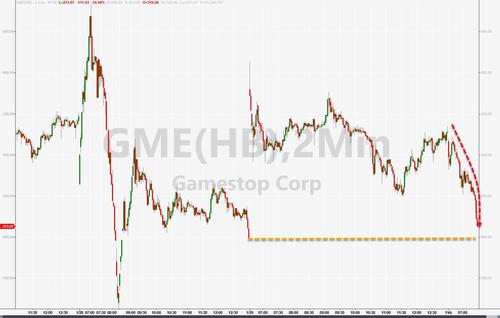 While there was no actual news, traders were scrambling to figure out if there was a catalyst to the move.

There was: according to an update from trading analytics firm S3 Partners (published at 1023am ET), after holding steady in the triple digits, the company’s short interest plunged, with the company’s founder Ihor Dusaniwsky reporting that according to the firm’s analytics, as of this morning, “short interest is just $8.82BN or 27.12M shares shorted” as the shares short have declined by a whopping 35.2 million shares over the last week.

According to S3 calculations, this represents just 53.15% short interest of the % Float (or 34.1% using S3’s version of SI % Float which excludes synthetic share); Confirming that shorting is now far easier, the borrow fee has plunged from 26% to just 10% indicating that millions of shares have indeed been unlocked for shorting. 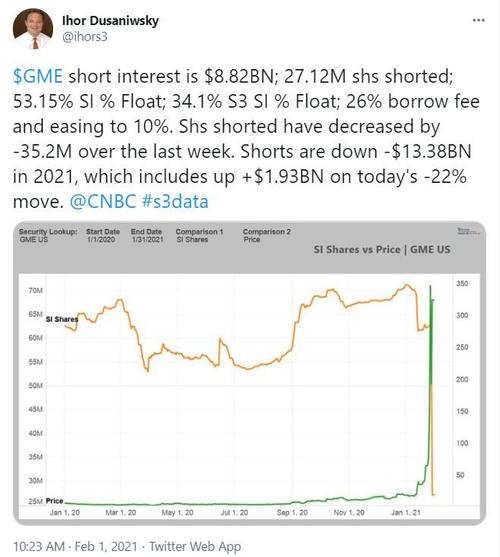 And with both short interest and borrow fees tumbling, the main catalyst behind the squeeze – namely GME being the most shorted Russell 3000 stock – is now gone.

Which begs the question: is the party finally over, and how long before GME trades back near its true value.