Late last night (after a quick scare that sent GME stock sliding when the r/wallstreetbets subreddit briefly went private) we said that the “real short covering hasn’t even started yet” in Gamespot because as we showed, despite speculation that hedge funds had largely covered their shorts, the truth is that the short interest as a % of float hadn’t even budged, and the bulk of the move higher was on simple long buying and a giant gamma squeeze. 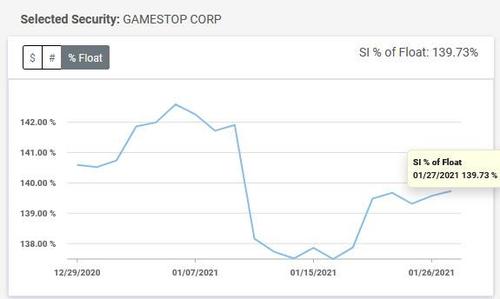 This morning, both Reddit and the broader investing public appear to have read this, and GME stock exploded for a 4th consecutive day, rising almost 50% to a new all time high of $500… 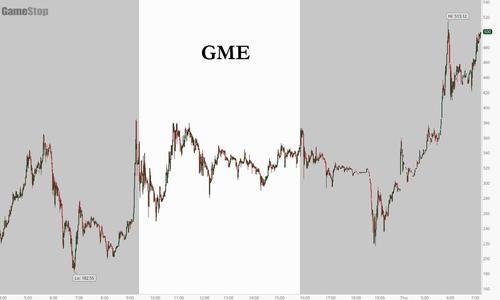 … and because where GME goes, so does the rest of the most shorted universe, shares in most of the stocks that have seen huge surges in recent days amid a frenzy of retail trading continued to rally in U.S. premarket trading.

Other Reddit favorites and heavily shorted stocks with gains also included Sundial, up 38%; Castor Maritime +68%; and Naked Brand +75%. First Majestic Silver, another stock that’s been cited as a short-squeeze target, rose about 20%, while Nokia ADRs fell 17% initially but we expect this move to reverse once the Barstool crowd – under Dave Portnoy who said he had bought $1MM in NOK shares – joins the WSB autists in ramping stocks higher. Also among most-active stocks in Thursday premarket trading, AMC was roughly flat; expect fireworks here too.

Finally, now that it is becoming clear that the GME shorts may be trapped in the stock, which can technically drift in perpetuity since the SI simply can’t drop, one way this could end is when Gamestop sells stock to the shorts who are desperate to get out but just can’t find enough freely floated shares.

The only wait out of this for the shorts may be to beg for the company to sell them stock. And GME can name any price https://t.co/4785L2P3VB

And since GME has all the leverage, and can demand any price for said equity offering, one wonders if this time next year GME won’t have billions and billions in cash on its balance sheet.

Big Government Rides To The Rescue Of Labor Unions