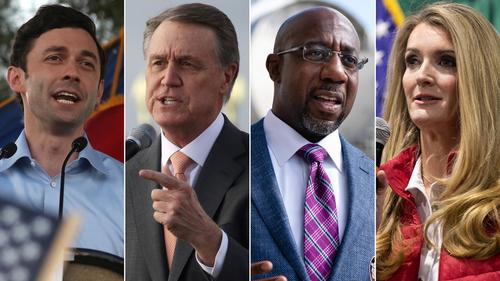 For anyone living under a rock, if both Democrats win today, Democrats will control both chambers of Congress and the White House.

While the vote count during the Georgia general election took ten days before the state was called for Joe Biden, Tuesday’s vote count is expected to be relatively fast, according to the New York Times, which suggests that a combination of fewer races on the ballot and a new rule requiring counties to begin processing early and absentee ballots at least one week before future elections, will result in a speedy result.

Officials can’t actually count the ballots until the polls close, but they can do all the time-consuming prep work. That means votes cast before election day — more than three million, according to Gabriel Sterling, a top state election official — should already be compiled, and pretty much all officials will need to do Tuesday night is hit “tabulate.”

The new rule allows counties “to essentially do everything except hit the button to print off the total,” said David Worley, the sole Democratic member of the State Election Board. -NYT

Nearly 3.1 million Georgians cast their ballots early – roughly 40% of all registered voters in the state, according to data from the University of Florida’s US Elections Project.

Stay tuned for more updates throughout the day.

Everyone is focused on Georgia today, where two Senate run-off votes will either give see a 50-50 tie or the Republicans retain a slim majority. “Hilariously,” Rabo’s Michael Every writes, “markets are moving on the recent surge in the Predictit election odds from ‘Dem zero’ to a 50-50 toss-up for both seats” although on Tuesday the odds of a “blue sweep” dipped modestly from 48 to 44, indicating a lower probability the Dems win both runoffs. 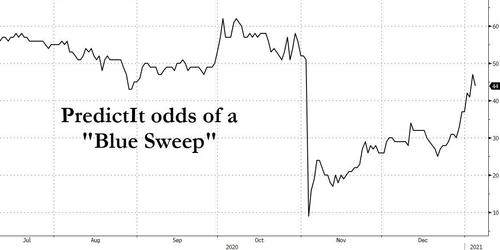 As discussed at length yesterday, the market concern is a ‘blue wave’ means more fiscal spending, and so faster Fed rate hikes or less easing, and a stronger USD. Yet with Democrats like Manchin seated, Every writes that “one would again have to be mad to assume a 50-50 Senate would just turn on the taps” and adds that at that point “the whole ‘Great Reflation!’ story is also shot down after its umpteenth insane iteration.”

Of course, everyone has their opinion about what happens next depending on the outcome which is why everyone will be glued to their favorite ideological echo chamber to follow tonight’s developments in Georgia. Luckily, as Goldman’s chief political economist Alec Phillips writes, results are likely to come more quickly than in the presidential election in November.

There are three reasons for this:

And while the actual vote tabulation will not start for any ballots (mail or in-person) until 7pm, everything else (signature checks and other verifications) should be done before then, at least for ballots received before election day. As such, Goldman believes that it is likely that most counties will have counted nearly all of the votes by midnight or soon thereafter.

Assuming that the vote counting occurs as outlined above, how long it takes for media outlets to call the results will depend on how close the races are and which candidates lead.

If the the margin is greater than few tenths of a point in either direction with most of the ballots counted, news organizations are likely to call the race reasonably quickly, potentially by the early hours of Wednesday (Jan. 6).

If the margin is narrower, it might depend on which candidates lead. A very close race with a slim Republican lead is likely to take longer for news organizations to call, as the late-counted ballots (i.e., late-arriving mail ballots and provisional ballots) have in the past leaned more Democratic (plus the media is clearly pro-Democrat).

On the other hand, if a Democratic candidate holds a lead of a few tenths of point by the early hours of Wednesday (Jan. 6), Goldman believes that “media outlets might be more likely to call the race based on the assumption that residual ballots would not change the outcome.”  Validating this timeline, this morning Georgia Secretary of State Brad Raffensperger indicated the Senate races were likely to be called on Wednesday (Jan. 6) morning.  Regardless of when networks call the races, the results will not become official until election officials certify the results, which under Georgia law must occur by Jan. 15.

One final point: due to the closeness of the race, there are no clear odds of who will be the inner. Furthermore, as Rabobank noted earlier, opinion polling at the state level tends to be more challenging than national polling. What’s more, the rapid demographic changes in Georgia – which made it a battleground state in the first place – make it even more difficult to calibrate the statistical methods. So the actual outcome may be very close and this also means that it could take some time before we know the final results. Oh, and in keeping with the current political climate, the results – whatever they are – are likely to be contested. 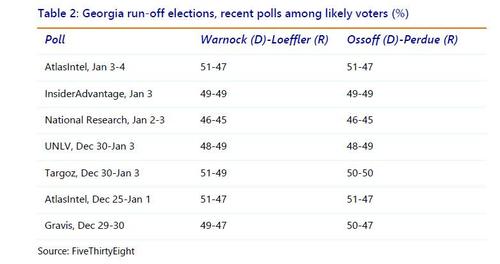 Now, The Left Owns It All

Goldman: Here’s What Life Under Democrat Control Will Look Like