Yesterday, Governors Andrew Cuomo and Gavin Newsom confirmed that cases of the “mutated” COVID-19 strain B.1.1.7, which was first discovered in the UK, had been isolated in their states, prompting members of Joe Biden’s COVID-19 advisory team to call for more genomic surveillance to better understand how these “mutated” strains might be spreading. And last night, Boris Johnson unveiled plans for England would join Scotland in a new nationwide lockdown, starting Tuesday. 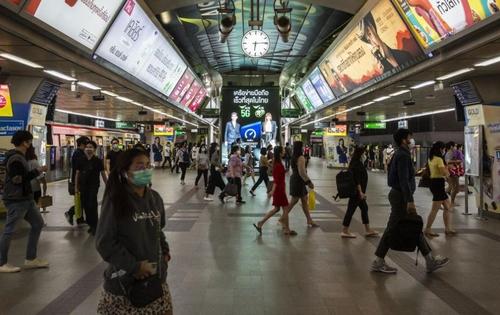 It’s widely expected that Germany will be the next major European country to order up a new lockdown, as Chancellor Angela Merkel insists that the current restrictions simply don’t go far enough. Media reports published over the weekend and yesterday claimed that Germany plans to close schools and all non-essential businesses for at least a month. Italy has extended its restrictions for a couple more weeks through mid-January.

Over in the US, a new wave of lockdowns apparently still hasn’t been enough to slow the outbreak in the Golden State, where COVID-linked hospitalizations have doubled over the last month thanks largely to surging numbers in Southern California. In LA County, hospitals are seeing ICU capacity surge as high as 120%, straining hospital staff. Ambulances sometimes are left waiting for hours before patients can be admitted to a bed.

Nationwide, hospitalizations are at record highs in the US, although COVID data from the holiday period is still being reported with a massive lag. 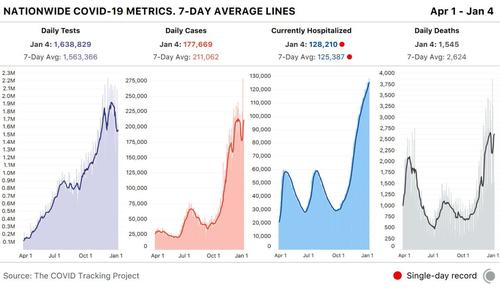 A member of Biden’s COVID advisory team appeared on CNBC’s “Squawk Box” Tuesday morning to compare the situation in LA County to something one would see during wartime.

“What it looks like right now is nothing short of what you would see in a time of war or a time of disaster where people are truly just getting triaged,” says @kavitapmd on health care in southern California. pic.twitter.com/TWqXUL4yFm

In other news, Japanese PM Yoshihide Suga said Tuesday that calls for a state of emergency measure to combat surging COVID case numbers would soon be answered, flip-flopping from his earlier position, where he insisted a state of emergency wouldn’t be necessary. Suga is still facing criticism at home and abroad for trying to promote a domestic travel program late last year that seemed at odds with the ongoing COVID-19 pandemic. Cases in Tokyo, meanwhile, have climbed to near-record levels: Tokyo confirmed 1.3K new virus cases Tuesday, the second-highest daily tally on record.

Circling back to Europe, the UK and several EU members have proposed splitting up doses of the Moderna and Pfizer vaccines to help stretch supplies even further. However, on Tuesday, the FDA hit back at this, proclaiming that there’s no evidence partial doses offer any level of protection.

Here’s some more COVID-19 news from overnight and Tuesday morning:

As more countries scramble to tighten restrictions as the vaccine rollout continues to lag, Switzerland is reportedly poised to be the next to extend the closure of bars and restaurants until the end of February (they’re currently slated to reopen after Jan. 22), according to the Swiss newspaper Tages Anzeiger. The nation’s Federal Council is due to decide on the measures at a meeting tomorrow, while existing restrictions such as the closure of gyms and museums may also be extended, the paper said.