Not long after her legal team’s latest appeal of a judge’s order that Jeffrey Epstein’s alleged madam, Ghislaine Maxwell, be held without bail over being a flight risk, federal prosecutors have finally unveiled long-awaited new charges against Maxwell, including sex trafficking a minor. 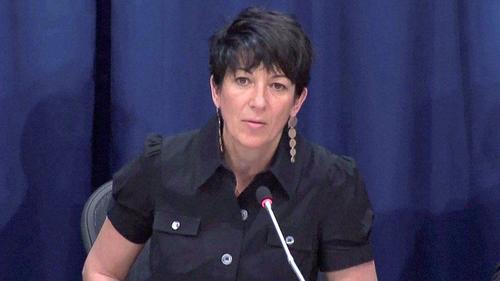 According to the superseding indictment, from between 1994 to “at least in or about” 2004, Maxwell “assisted, facilitated and contributed to Jeffrey Epstein’s abuse of minor girls by among other things helping Epstein to recruit, groom, and ultimately abuse victims…” The indictment confirms that some of the victims were as young as 14. The indictment also alleges that both Maxwell and Epstein knew some of the accusers were minors.

Beyond this, Maxwell allegedly “repeatedly lied when questioned about her conduct”, including during testimony from 2016.

The new indictment confirms the existence of a fourth victim – “Victim-4” in court documents – who was allegedly abused between 2001 and 2004, and also adds a new charge, a “sex trafficking conspiracy” and alleges that Victim-4 was a victim of this conspiracy. 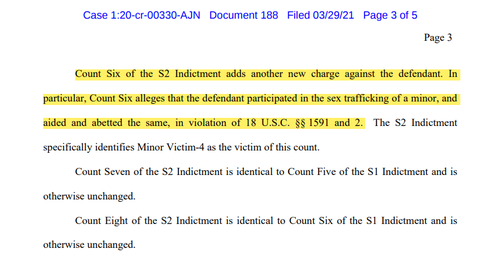 The indictment also alleges that other unnamed “conspirators” sent the minor lingerie and gifts. Epstein and Maxwell encouraged the minor to “recruit other young females to provide sexualized massages to Epstein.” These efforts were ultimately successful, and they found more victims.

Importantly, these charges apply to conduct that occurred at Epstein’s Palm Beach mansion. Ghislaine and her legal team have argued that she is still protected by Epstein’s sweetheart deal with prosecutors from more than a decade ago, and that she is therefore immune to these charges, as Techno Fog points out.

Read the entire superseding indictment below: