As the pace of COVID spread continues to slow, the number of new cases reported globally every day has declined substantially since the start of the year.

However, the total confirmed cases globally has topped 107MM. Deaths have surpassed 2.35MM, while in the US, the country with the most confirmed deaths, the tally is 472K. 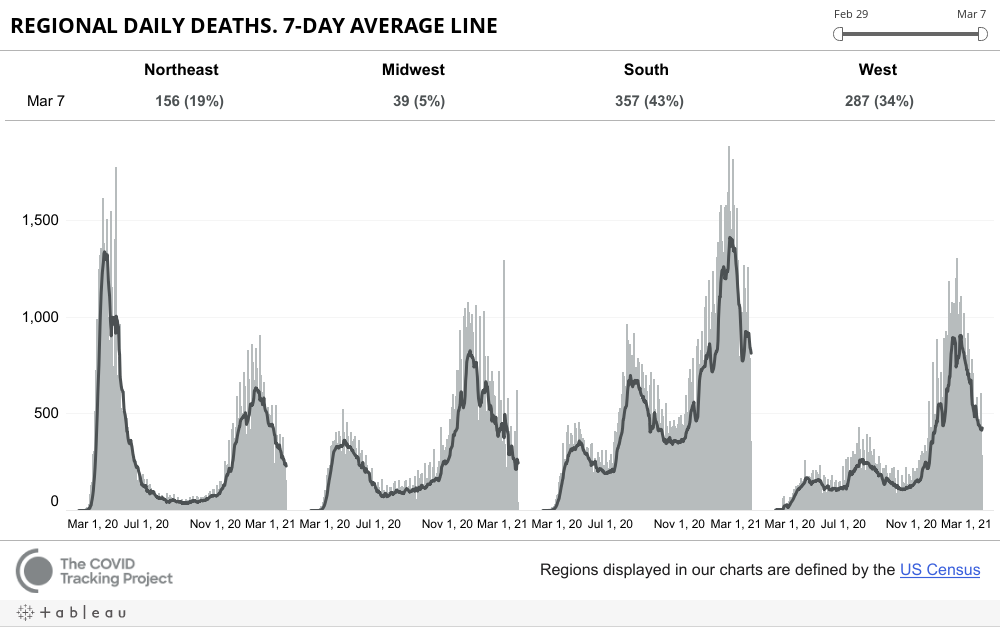 …hospitalizations have also declined across all age groups in the US, most notably in the critical 65+ age group, considered the most vulnerable. 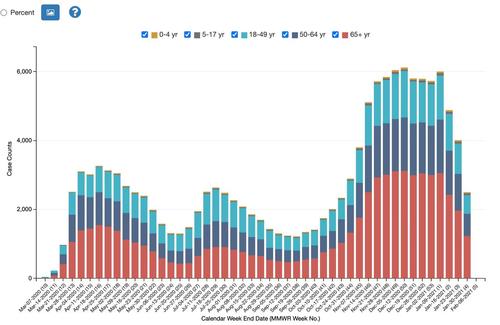 Elsewhere, in Europe, German Chancellor Angela Merkel warned that coronavirus mutations will likely become dominant across the country, threatening to derail progress made in containing the pandemic. The Irish government said about 22% of close contacts now catch the virus, double the rate in previous waves, suggesting the new variants are more infectious. 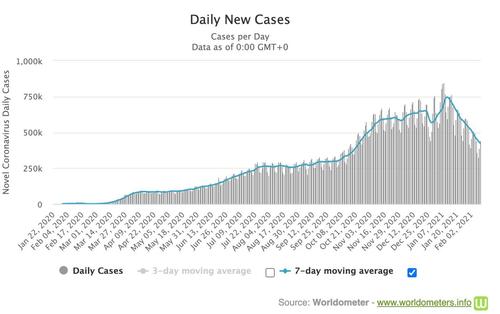 However, there’s a catch: the WHO warned that a decline in overall virus cases conceals increasing numbers of outbreaks and community spread involving variants – aka mutations – including the strain first identified in South Africa late last year has spread to 18 countries. 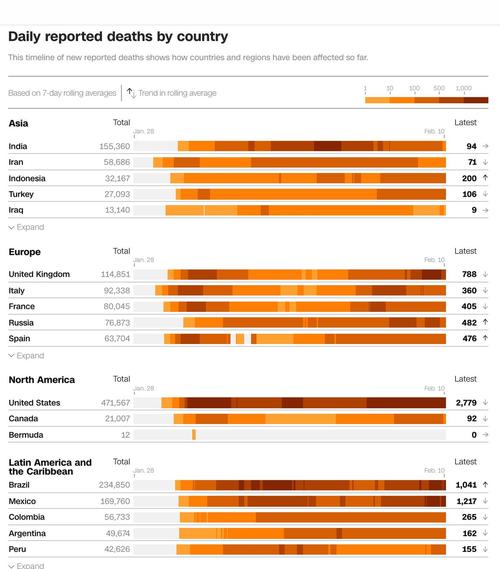 Japan aims to use its planned certificates for coronavirus vaccine recipients mostly to regulate international travel since requiring them in a domestic settings like events and restaurants could lead to discrimination against those who have not received the shot.

Here’s some more news from overnight and Thursday morning:

Hospitals in England treated almost 102,000 people battling the virus last month, representing a third of all patients who have needed such care since the pandemic began, NHS England said. Hospitals are still treating about 1,000 more patients with covid than they were at the peak of the first wave (Source: Bloomberg).

Sweden will stick to its recommendation to not give AstraZeneca’s Covid-19 vaccine to people older than 65, ignoring guidance from the World Health Organization, state epidemiologist Anders Tegnell said (Source: Bloomberg).

Germany plans to impose restrictions on travel from Austria and the Czech Republic over concerns about aggressive mutations of the coronavirus, potentially disrupting cross-country commuters and commerce (Source: Bloomberg).

Major chains like McDonald’s Corp. and Chipotle Mexican Grill Inc. are opting to keep their tables cordoned off due to health and staffing concerns. Other restaurants say opening at New York’s limit of 25% capacity won’t yield enough sales to warrant the additional staffing, cleaning and operational costs.

Finally, President Joe Biden reportedly discussed the pandemic response when he spoke to President Xi Jinping on Wednesday in his first direct contact with the leader of the world’s second-largest economy since winning the November US presidential election.

Maryland Set To Tax Online Ads From Facebook And Google

Futures Rebound From Asia Rout, Bitcoin Back Over $51,000