The global COVID death toll has surpassed another macabre milestone: more than 2.5MM people have died from the virus around the world. 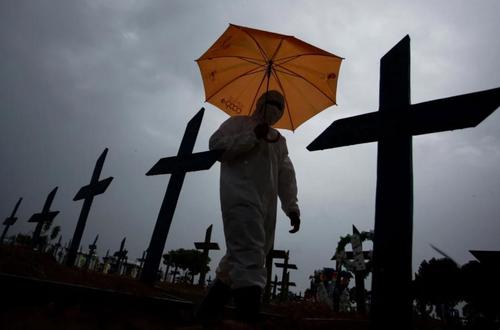 Although globally new deaths are falling thanks to changing weather patterns and the rollout of various COVID-19 vaccines in certain hard-hit countries, with over 800K deaths, Europe is the hardest hit region, followed by Latin America and the Caribbean, then the US and Canada. 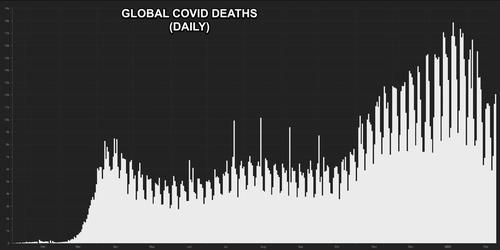 Nearly half of these deaths can be attributed to just five countries: the US, Brazil, Mexico, India and the UK. They have reported 506K, 250K, 183K and 122.3K deaths each, respectively. The combined global tally according to Johns Hopkins University topped 1MM on Sept. 28, a little over nine months after the first death was recorded in Wuhan. The world topped 2MM on Jan. 15 – roughly six weeks ago.

Despite extreme differences in restrictions, vaccine roll-outs, and levels of inequality, the pace of COVID-linked deaths has slowed almost uniformly across every continent since the start of 2021, as the chart above shows, but since November, Europe has contributed roughly one-third of the global daily total. 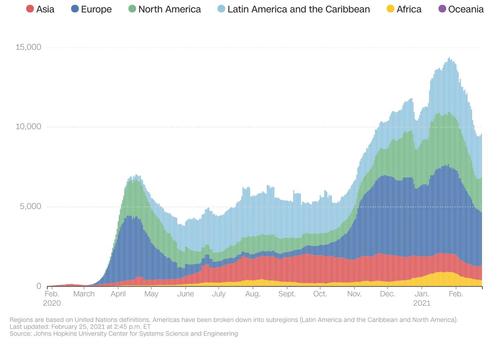 The US has seen a sharp drop in COVID deaths since the vaccines were rolled out late last year (Europe hasn’t had nearly as much success with getting vaccines to patients). And deaths among nursing home residents, seen as the most vulnerable, have fallen by an even greater margin. 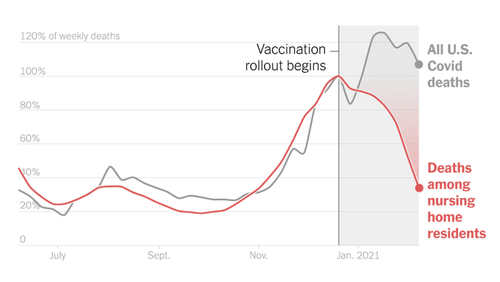 But daily death tolls have fallen on every continent since the start of the year. Deaths in North America have fallen by nearly 25%, faster than Europe and Africa, which shed 13% to report 378 new deaths per day.

While Britain earlier this week laid out its plan for reopening its economy, EU officials said that despite initial delays, the bloc remains on track to reach its goal of fully vaccinating 70% of adults by mid-September, after AstraZeneca’s boss said on Thursday that he was confident the company could make up a huge shortfall in promised doses. Speaking by videolink, Pascal Soriot told the European Parliament that Europe had plans to accelerate its vaccination program, and that the delivery deficit (which is currently equal to around 60% of the 100 million doses that were supposed to be supplied between January and March) could be attributed to low production yields in the EU factories making AstraZeneca’s vaccine.

At any rate, while the UK prepares to wind down its COVID-fighting measures, other European economies, most notably Finland, are weighing whether to impose another round of restrictions.

Escobar: A Sovereign Iran Will Move Closer To Russia-China