Gold Vs Bitcoin Part 2: Careful What You Wish For

This is the second part of my look at the age old “Gold vs Bitcoin” debate, which I outlined in Part 1: “Gold vs Bitcoin is Fscking Stupid” as being faith-based and pointless. 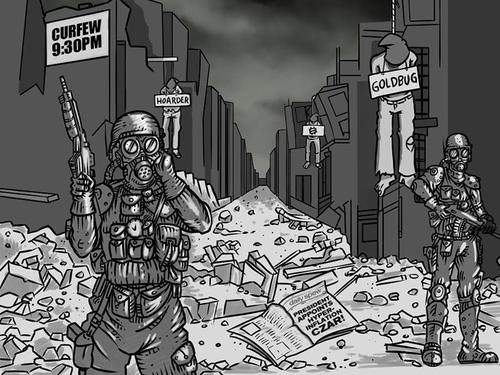 While it is thoroughly enjoyable to watch it play out between the symbolic archetypes of  near-boomer Peter Schiff and his millennial son, Spencer, I sometimes suspect that to  be a staged, WWE style confrontation….

However I bring up the elder Schiff for a reason, because part of his core thesis is that after the coming global monetary reset, the world will move back to a gold backed currency.

A return to a gold-backed standard would be a disaster

This I find not only unlikely, but undesirable. Anybody paying attention to the way the world works now absolutely shouldn’t want a return to a gold-backed currency, especially people holding their wealth in gold.

The reason is very simple: if that were to happen, there would occur with that a corresponding global ban on private gold ownership. Anybody who thinks this through can see that is the most likely way it would play out.

The religious goldbugs think the USD will implode (probably correct), lose it’s global reserve currency status (correct) and then… government will admit defeat, remonetize the world with a gold backed currency. Doing that would instantly make the goldbugs who were outside the system, who were highly critical of it and who reject the legitimacy of much of it, the most wealthy and powerful participants in the new monetary regime.

Do you really think it would play out like that? Do you really think that governments who double-down on incompetence, who think nothing of changing the rules and moving the goalposts, who stop at nothing to preserve their own position and serve their own interests are going to throw their hands up in the air, shrug their shoulders and walk offstage to clear a path for a next generation of goldbug power elites?

I don’t think so.

This is what happens instead:

After a few months of this and then the time is right, a coordinated set of policy initiatives will emanate from some elitist circle jerk like Davos or Jackson Hole:

…and gold jewelry will be the MAGA hats of the future. It’ll end your career.

I may be off on the details, but that is in essence what I would expect happens if the global monetary reset heralds a return to the gold standard.

The powers that be will never admit causing the monetary crisis, will never concede that it was their policies over successive decades caused it, and they will never voluntarily allow a tectonic shift to move power and wealth to anybody other than themselves.

So if you’re a big believer in preserving your wealth through holding gold (as I am), then this is definitely what you don’t want to be wishing for. This is what the Bitcoiners should be hoping happens to the goldbugs.

As for the Bitcoiners….

Some Bitcoin maximalists think that it is destined to become the global world reserve currency because (wait for it)….

It would essentially force governments to be honest.

I should be able to rest my case here. Governments are congenitally incapable of honesty. Perhaps there was a point in time when that wasn’t the case, but it certainly isn’t today, and the governments we have today will not voluntarily move to a system that forces them to be honest.

The only way Bitcoin gets made the world reserve currency is if it’s done in a way that removes any and all advantages from those who own it today. This is how the system works: the elites are in charge, and anything that comes along to challenge their authority is either co-opted or criminalized.

The system is hardwired to preserve the power and privilege of the people running it, and as I’ve said in the past, the privilege isn’t race based, it’s based on the structure of the monetary system.

Both goldbugs and Bitcoiners think government bans are unlikely or unworkable. Just last week on Coindesk’s The Breakdown, NLW’s Long Reads Sunday was Alex Gladstein’s Can The Government Ban Bitcoin?, who wrote about the mechanics of implementing a ban on bitcoin…

…possibly overlooking that we are one year into a New Normal where that which is not expressly permitted is forbidden.

Anybody under-estimating the level of overreach and oppression that all governments globally can undertake, in concert, has to either have been asleep for the last year or is so comfortably cocooned  in one of those “post-physical” lifestyles that they didn’t care.

To be clear however, I mostly agree with Gladstein’s reasoning on why Bitcoin can’t be banned effectively. Which is also why I think that precludes it from being part of any kind of government sponsored monetary restructuring (that said, some central banks may start buying Bitcoin as a part of their own reserves, the first national central bank to ponder it that I know of was Barbados, back in 2015)

If Bitcoin were to become the rails of the global monetary system, it would happen in a way where the governments can completely regulate every single aspect of it, including where and how you HODL, whether it’s legal to mine (or stake for other or future cryptos) and whether or not you’re permitted to self-custody.

So if you’re a big believer in preserving your wealth through migrating into the crypto-currency economy (as I am), then this is definitely what you shouldn’t be betting on. This is what the goldbugs should be hoping happens to the Bitcoiners.

The true enemy is EvilCoin

If I can see horrible outcomes as a result of what either camp thinks would be “victory”, what am I doing about it? This is what I said in Part 1,

“the entire debate pointless because people who invest in either asset class are doing so for the same reasons…If the job at hand is to protect one’s wealth from systemically rigged and disintegrating monetary regime, arguing for one over the other feels like trying to defend against it with only half the available toolkit….The entire gold vs crypto argument goes away when one realizes that there is more overlap in the objectives of each asset than there are differences”

I’ve never been a Gold vs Bitcoin guy, I’ve always been a Gold and Bitcoin guy. And by “gold” I mean precious metals, and by Bitcoin I mean crypto currencies in general (I also like Ethereum, as described in part 1). 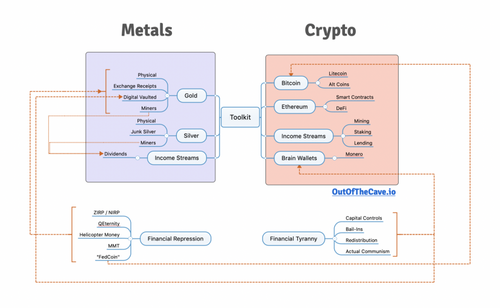 The post-reset toolbox, from Part 1

Personally I don’t see any danger that either camp will ever see that their preferred monetary asset becomes the global reserve asset. Gold doesn’t allow governments to embezzle wealth from its subject and Bitcoin is off the table. They would never go with an open source project pioneered by an anonymous cypherpunk. They just won’t.

What is more likely and what I personally am betting on is this:

There will be some form of global monetary reset involving Central Bank Digital Currencies (CBDCs). China is already a fair way down the runway with their Digital Currency Electronic Payments (DCEP) system and the use of digital cash is far more pervasive there already.

China is dictatorship. There is zero personal freedom and there are no sovereign individuals. Their social credit system will increasingly regulate every aspect of every citizen’s most minute activities and it will be the envy of technocrats the world over.

I am betting on The Great Bifurcation playing out in the classical liberal world as follows: 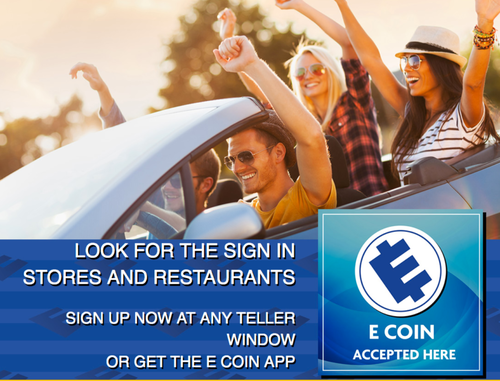 Erstwhile democratic nations will implement CBDCs which will be the rails of MMT, UBI and eventually full social credit systems “with Western characteristics”.  As the middle class gets hollowed out, most people will fall below an impermeable membrane into the new serfdom. The defining characteristic of the underclass:

The people who owe more than they own will basically be screwed and if there is another financial crisis before all this happens, say one in which equities, property values get smashed down while the cost of living skyrockets, then what’s left of the middle class will be quickly sorted into either category.

I am always surprised at how few people I talk to have ever watched Mr. Robot.  However its explanatory allegory around the two-tiers of digital money after a global financial crash is a compelling one.

So called “Evilcoin” is the CBDC, run by the establishment and is more like company scrip of yore, redeemable across the company platform. Alongside EvilCoin is Bitcoin, which people prefer and what actually holds value and confers a greater amount of economic freedom. 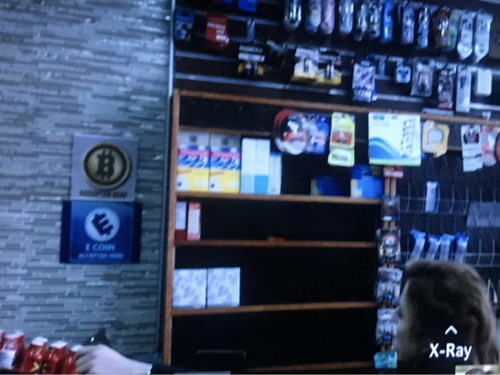 In short: we’re headed into two-tier society, one where the tier you’re in relies on which form of digital currency economy you’re participating in the most. That’s what we look at specifically in my premium letter The Crypto Capitalist (including which publicly traded companies will be the best ones to own here in the New Normal).

If there is any single take-away from all this, it is this, as long as “the system” as we know it, stays on the rails, then:

“Gold vs Bitcoin” is the wrong question.

“What are the alternatives to EvilCoin?” is the only question.

“I Am Open”: 50,000 Italian Restaurant Owners Plan to Ignore Lockdown