Last week, Goldman published its preview of what political life would look like for at least the next two years under a Democratic “blue sweep” of Washington. Today, in a follow up to that widely-read report, Goldman’s chief economist Jan Hatzius assesses the macroeconomic implications of Biden’s campaign proposal to modify and expand the Affordable Care Act (ACA), which Goldman’s economists believe has a good chance of enactment through the reconciliation process later this year. Below, we except from the key parts of Goldman’s report providing a preliminary view of the macroeconomic impact of Biden’s expanded healthcare platform, which Goldman calls Bidencare.

The Biden-Harris healthcare platform proposes to expand healthcare coverage and reduce costs, in part by providing more generous health insurance subsidies to consumers and by lowering the Medicare eligibility age from 65 to 60. The proposal would boost gross government spending on healthcare by roughly $1.5tn over 10 years (0.6% of GDP).

The most straightforward effect of the plan would be an increase in healthcare coverage, on the order of 14 million people by the mid-2020s according to the Penn-Wharton model. This expansion would be roughly half as large as the 29.6 million people who gained coverage during the ACA’s implementation from 2010 to 2015, 24 million of whom joined government-sponsored or direct-purchase programs. Accordingly, many of the macroeconomic effects of the ACA during the 2010s would likely recur on a smaller scale in the 2020s.

To complement Goldman’s review of the academic literature studying the ACA, the bank analyzed the state-level cross section of macro outcomes in the 2010s (the ACA was passed in 2010 and for the most part implemented over 2012-2017). 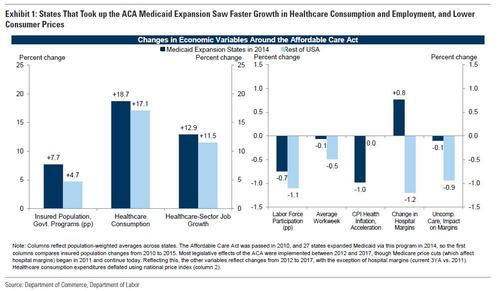 As with the original ACA, coverage expansion in the 2020s would likely be financed by some combination of Medicare reimbursement rate cuts (lower healthcare prices paid by the government to healthcare providers), tax increases, and efficiency gains.

In terms of labor supply effects, labor force participation fell almost everywhere during 2012-2017, but it surprisingly fell by less on average in Medicaid expansion states (-0.7pp vs. -1.1pp in non-ACA states over the full period). Similarly, the average workweek fell in most of the country, but by less so in expansion states on average (-0.1% vs. -0.5% over the full period).

The academic literature on the healthcare sector implications of the ACA generally arrives at the same conclusions using considerably more detail in order to isolate the ACA’s causal effects. As shown in Exhibit 2, these studies generally find that the ACA lowered healthcare prices and costs, increased healthcare consumption, and generally improved quality of care, particularly for lower-income consumers. However, some studies found a reduction of physician time spent with each patient, and the potential consequences of this trend on quality of care warrant further study; meanwhile deductibles soared. Additionally, some studies suggest improvements in health outcomes or labor productivity are concentrated or skewed towards specific subgroups, such as lower-income households or minorities. 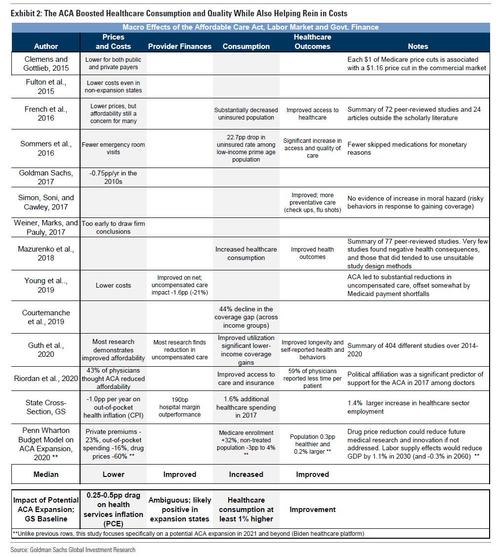 Based on the median results of these studies, Goldman’s state cross-sectional results, and an assumption that the 2020s coverage expansion would be roughly half as large as that of the ACA itself (discussed earlier), the bank offers tentative estimates of the implications of a possible ACA expansion on these macro variables in the final row of Exhibit 2. Taken together, Biden’s proposed ACA expansion would ultimately boost healthcare consumption by at least 1%. If such legislation is partially financed by Medicare reimbursement rate cuts — as was the original ACA — it would likely lower PCE healthcare inflation by 0.25-0.5% per year for several years. These inflation effects would be additive to the continued drag from annual Medicare cuts legislated by the original ACA (worth roughly -0.5%) and to the temporary changes in healthcare price levels in 2020-22 related to the coronavirus. The literature also suggests that ACA expansion would likely improve health outcomes as well, most obviously for those gaining coverage.

In terms of the effect on the medical sector’s financial health, Goldman writes that hospital margins actually rose during ACA implementation, despite the legislated cuts to Medicare prices paid to hospitals and negative price spillovers to private-payer reimbursement rates (e.g. what health insurance companies pay to hospitals). And both in the state cross-section and the academic literature (“Provider Finances” column of Exhibit 2), ACA implementation appeared to be neutral or even positive for the financial health of providers (190bp of margin outperformance among hospital systems in expansion states, population-weighted, based on data from the American Hospital Association).

The outperformance of hospital margins in expansion states likely in part reflects the fact that Medicare reimbursement cuts affected providers in all states, whereas the benefits of the ACA’s Medicaid expansion (primarily increased volumes and less uncompensated care) were better enjoyed by states that participated in the program. As shown in Exhibit 3, expansion states saw slower growth of uncompensated care (relative margin impact of +0.8pp on average versus 2011), which for example includes uninsured individuals going to the emergency room and not always paying the full bill. 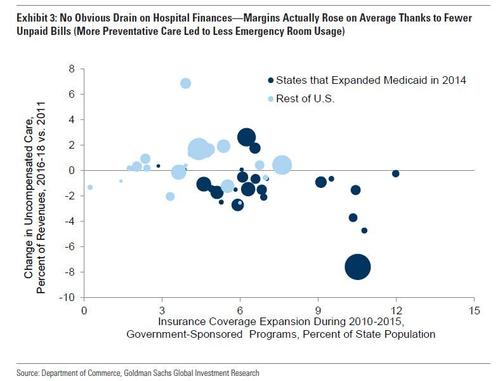 Given the magnitude of the Medicare cuts, it is somewhat surprising that margins increased at all over this period. At a minimum, the absence of margin contraction in expansion states in the 2010s suggests scope for additional increases in healthcare coverage and consumption that are financed in part by lower prices—and that need not overburden the healthcare system itself. 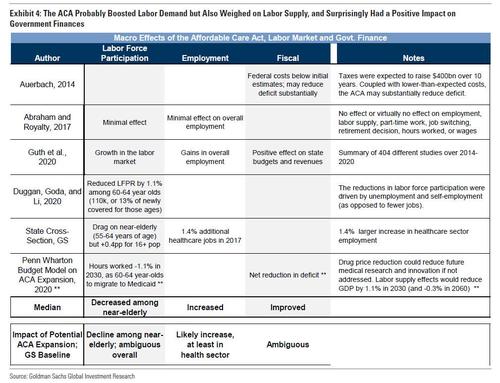 In terms of the impact on the labor market (first two columns, exhibit 4), the literature is more mixed, with some evidence of a boost to employment levels, but ambiguous effects on labor force participation. In the strongest evidence of a negative effect, Duggan, Goda, and Li (2020) analyze a sample of near-elderly individuals, finding that the expanded coverage options in the ACA reduced participation by 1.1% among this group (or 110k individuals exiting the labor force). Using microdata from the Current Population Survey, Goldman also finds that larger increases in insurance coverage were associated with larger participation declines among those close to retirement age (55-65 years old), both in states that expanded Medicaid and in those that had larger increases in coverage, as shown in Exhibit 5. 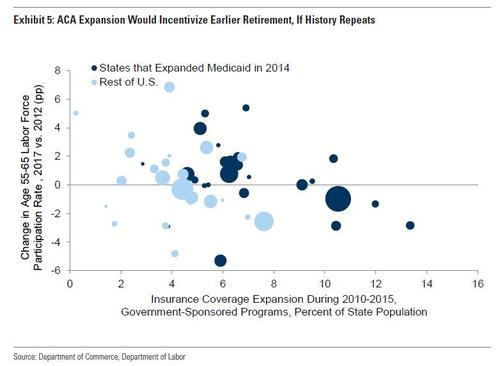 Given this and the likelihood that Biden’s plan to lower the Medicare eligibility age would amplify this incentive, Goldman believes that implementation would likely reduce labor force participation — at least among the near-elderly — but this labor supply effect would only partially offset the boost to employment levels from other channels in the medium term.

The GDP effects of an ACA expansion are less clear cut, given so many moving parts and uncertainty around the details of the program. That said, based on the bank’s analysis and literature review, Hatzius says that he believes the GDP effects are likely to be positive over the medium term, unless they are financed by large tax increases on lower- and middle-income consumers. In summary, Goldman believes that the combined GDP boost from higher healthcare consumption, increased healthcare labor demand, and a more productive workforce could more than offset the drag from reduced labor force participation among the near-elderly.

Bottom line: Bidencare will be just the “virtuous wrapper” the doctor ordered so speak, to transfer $1.5 trillion in debt-funded deficit spending into the broader economy, while enabling tens if not hundreds of billions of government inefficiencies (read waste, corruption and embezzlement) along the way, while banks get to pocket their 5-10% advisory fees along the way, making everyone – except future generations of course, which will be saddled with even more insurmountable debt – better off. That last bit, by the way, was from us and not from Goldman for obvious reasons.

Trump lies about price of turkey

Could Nancy Pelosi Lose The Speakership To Kevin McCarthy?