Goldman: The Economic Surge Is Starting To Flare Out… And Markets Are Starting To Price It In

A year ago, Goldman Sachs wrote about an adage that came to characterize the market’s response to the pandemic: “investors can not afford to wait for the resolution to a problem that they know will be resolved.” And a year later, around the time Wall Street decided that covid is now behind us, the resolution is well and truly underway in the US with 38% of Americans having already received a first shot of the vaccine 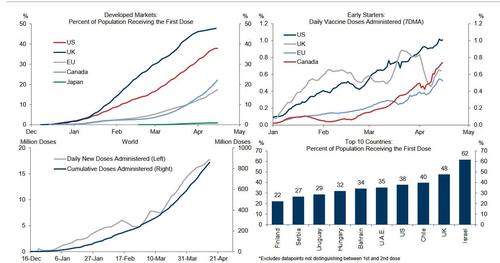 … and nearly 80% of all Americans 65 and older having received at least one dose.

And signs of how the economy may respond to this resolution are already starting to crop up — especially this week.

Interestingly, as Goldman’s Chris Hussey writes, Friday’s University of Michigan consumer sentiment survey disappointed, rising less than expected to 86.5 from 84.9 a month ago due to subdued expectations about the future… 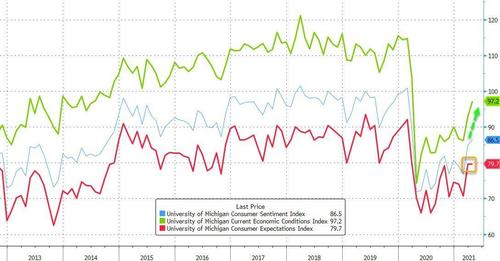 … perhaps as a result of 1-year inflation expectations soaring. 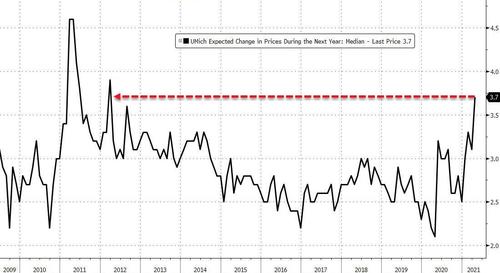 When coupled with March’s blockbuster retail sales report, Goldman writes that “it may suggest that the stimulus-driven spending surge is already starting to flare out.” But it might also reveal how stimulus checks are hard-pressed to erase the longer-term memory of a 1-year+ pandemic-fueled lockdown.  The survey’s current economic conditions component rose by 4.2pt to 97.2. But the expectations index remained unchanged at79.7. As Goldman suggests, “it may be that consumers will need to live and feel ‘normal’ for more than just a shopping trip to the mall before fully embracing a post-pandemic era.“

On one hand, this last point could be encouraging for markets as it suggests the reopening may have legs. But just how long those legs are is an increasingly hot topic of conversation. As Goldman strategist Alessio Rizzi warned in a separate note, we are probably entering the last stage of pricing the growth acceleration.

To be sure, the market action last week may point to signs that the reopening trade could be already starting to fade.

Putting all this together, Hussey writes that “in a week in which the US made significant progress in its recovery, we learned that business sentiment is only improving while more people are getting their job back and Banks reported strong profits through March, the procyclical trade showed signs of getting a little ‘long in the tooth’.”

Indeed, as the Goldman strategist concludes, we may now be in a mirror image from one year ago today, when “investors find out that they can not afford to wait for the fading of a recovery that they know will eventually fade.”

“No Groundbreaking Data Points”: Here’s What Analysts Are Saying About Tesla’s Earnings Report