In what is likely his last note of the year, Goldman’s chief economist Jan Hatzius takes a look at what 2020 has taught him about the economy and the practice of economic forecasting, and writes that “at this early stage, we see four lessons with potentially more general implications. First, incorporating real-time data into a standard GDP and employment framework can yield large benefits, especially in a crisis. Second, forecasters need to be flexible and eclectic in order to add value, especially in a crisis. Third, Keynesian policy prescriptions have now triumphed in two successive crises [ZH translation: one can always “fix” debt with more debt, until one day everything comes crashing down]. Fourth, people and market economies have a remarkable capacity to adapt. 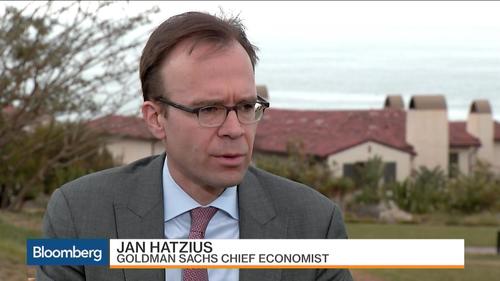 Amusingly, Hatzius starts off rather humble – for a change – admitting that pretty much everything he predicted a year ago would happen… was dead wrong:

We recently reviewed our ten questions for the US economy in 2020, the answers we gave a year ago, and what actually happened. Most of our answers were wrong because the pandemic pushed the economy into its deepest (though probably also shortest) recession on record.

Of course, to those managing money based on the bank’s recos and forecasts, this admission will hardly help offset the losses, but just so the introspective Goldman chief economist can demonstrate his true contrition for having been wrong again, he has published a note in which he promises that he has learned his lesson. Or rather four:

… while holding ourselves accountable for last year’s predictions is always important, a more interesting question might be what we can learn from the way 2020 unfolded after the pandemic had appeared on the radar screen—from the earliest reported Chinese cases in January to the start of the global vaccination campaign in December.

At this early stage—and we emphasize that our conclusions might change once the pandemic is truly behind us—we see four lessons with broader implications for economic forecasting.

Said lessons are listed below, as follows:

1. The benefits of real-time data, which of course is actually useful compared to seasonally adjusted, goal-seeked and manipulated “government data” whose only purpose is political validation and propaganda.

When the pandemic hit China in January, we were slow to recognize its global scale. Well into February, we focused on the “spillover” effects from economic weakness in China on US growth, working through trade links, tourism, and supply chain disruptions. Only at the end of February—after the lockdowns in northern Italy—did we start to treat the virus like the global shock it was.

But that downgrade set the stage for a series of dramatic further cuts over the following month, as shown in Exhibit 1. At the same time, we held on to a relatively optimistic view of the shape of the rebound after the initial plunge, lifting our 2021 GDP growth forecast to far above-trend rates. 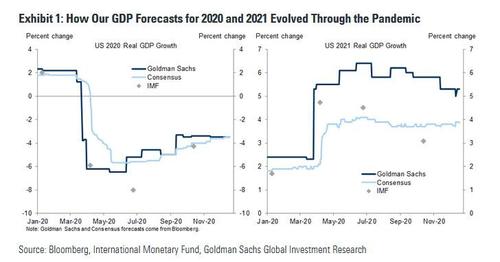 One key reason why we felt confident in slashing our Q2 GDP numbers so aggressively was the timely and granular information about the real-time performance of the economy from cellphone locations, credit and charge card transactions, worker panels, and other real-time data sets. This information was available publicly, but we invested a substantial amount of resources in making it compatible with standard economic measures such as GDP and payroll employment. Once the economy hit bottom in April, the framework confirmed that the recovery was proceeding swiftly in the short term, which also raised our confidence in the optimistic longer-term view, with a sharp rebound in Q3 and ongoing strength in 2021. The broader lesson is incorporating real-time data into a standard economic accounting framework can yield large benefits, especially in a crisis.

2. It’s better to be a fox than a hedgehog, or the “we get our best lessons from books” excuse.

Professor Philip Tetlock of the University of Pennsylvania is best known as the co-author of Superforecasting: The Art and Science of Prediction and the founder of the Good Judgment Project. In an earlier book on forecasting, he introduced his distinction between two forecaster archetypes, “hedgehogs” and “foxes”. Hedgehogs use a single model to explain the world across a large range of different states in a deductive manner. By contrast, foxes are inductive decisionmakers who don’t believe in an all-encompassing model, use several different approaches to analyze the situation, and then triangulate between them to come up with a view. Tetlock focuses on political predictions such as the fall of the Soviet Union and the end of Apartheid, and documents that foxes generally outperform hedgehogs.

We certainly have our share of strongly held views about how the economy works. We think that a financial deficit—an excess of total spending over total income—exposes the private sector to a greater risk of retrenchment in response to negative shocks. We think many financial market moves are driven by sentiment rather than economic fundamentals, which means that shocks to financial conditions are often exogenous drivers of growth and it makes sense to look at measures such as our FCI impulse. We adhere to the broadly Keynesian view that the ups and downs of the labor market often amplify business cycle impulses, reinforcing growth in a boom and constraining it in early recovery. And we think that fiscal tightening—especially in a zero-rate environment where it is harder for the Fed to react—often weighs heavily on growth in the short to medium term.

But 2020 was not a time to dig into these views like a hedgehog. In March, we took little comfort from the private sector surplus or the initially solid labor market momentum, as these positive forces paled in importance relative to the dramatic escalation of the pandemic. In April and May, we didn’t build a negative FCI impulse or self-feeding labor market weakness into our forecasts, as this would have made them too extrapolative at a time when the progress in containing the pandemic clearly dominated any driver of growth. And in August, we kept our concern about the growth effects of the fiscal tightening in check, reasoning that the exceptionally high personal saving rate would cushion the impact on spending. These decisions all proved correct (although more recently we seem to have overestimated the short-term impact of the renewed rise in infections on the economy).

3. Perhaps the funniest “lesson” according to Goldman is that what happened in 2020 was “another Keynesian triumph”; here Hatzius is either trolling his readers (again) or he is truly oblivious to the fact that the global economy is now constantly on the verge of collapse and needs constant central bank interventions precisely because of such “Keynesian triumphs” that will push global debt to surpass a third of a quadrillion dollars in the next few years, leaving central banks with hyperinflation as the only recourse to restore some normalcy to a world where money printing is now the norm.

Some forecasters who view themselves as Keynesian overemphasized the multiplier effects from the labor market collapse in April, as well as the growth hit from the fiscal tightening in the fall. But these misses should not obscure the fact that the 2020 crisis was another triumph for Keynesian economic policy—a framework that prescribes aggressive monetary and fiscal support in response to negative shocks, especially those that look clearly temporary. The extent to which policymakers turned to Keynesian solutions is probably best illustrated by Exhibit 2. In Q2, the combination of expanded unemployment insurance, tax rebates, and small business support delivered the biggest increase in real disposable income on record, in a quarter that also saw the biggest decline in real GDP on record. 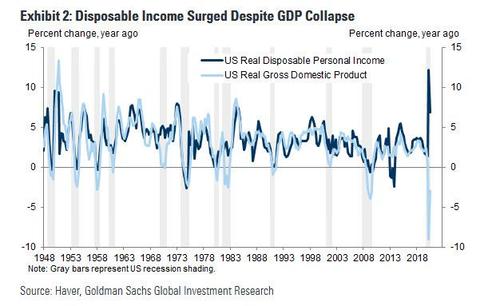 Fears in some quarters that stimulus on such a scale would lead to a destabilizing increase in inflation expectations or a run on the currency proved unfounded; on the contrary, most commentators now think that these aggressive policies were essential for stabilizing both the financial markets and the real economy in a moment of extreme peril, and they prevented what otherwise would probably have been dramatically negative second-round effects. The 2020 crisis thus adds to the evidence from the 2008 crisis that monetary and fiscal policymakers should be very aggressive in delivering demand-side stimulus when faced with a major downturn.

Right, and just in case central banks should also inject a few trillion for good measure, not allowing a crisis to go to waste, and making the 0.1% the richest they have ever been.

Which brings us to Goldman’s fourth and final lesson, one which we actually agree with:

4. People and market economies have a remarkable capacity to adapt.

The other economic lesson of 2020 has a more classical flavor: market economies are highly adaptable. The abrupt shift from office-based work to at-home work proved much less disruptive than anticipated, at least from the employer’s perspective (though many employees might beg to differ). The move from in-store shopping to online shopping was similarly seamless; indeed, US retail sales had returned to the pre-pandemic level as early as June, when in-store shopping was still down 35% relative to normal. The supply side of the economy has proven remarkably resilient so far, with fewer bankruptcies than feared, greater new business formations than before the crisis, and a rapid decline in joblessness so far (though labor market slack remains sizable). And each successive virus wave (scaled by the increase in new infections) has had a smaller—and smaller than expected—impact on economic activity. This is partly because improved treatments have gradually made the virus itself less lethal and partly because both governments and private individuals have gradually learned to restrict those activities that pose the highest risk of infection relative to their economic value and adjust others in ways that reduce risk, e.g., through mask mandates and better ventilation.

Such adaptation measures remain very important in the near term in view of the continued high level of infections. However, they will probably become less necessary next year as the population is successively vaccinated. If this process unfolds reasonably smoothly—obviously still a big if—the story of how the scientific and pharmaceutical community developed and distributed safe and effective vaccines so soon after the discovery of the virus will look like the biggest triumph of human adaptation and ingenuity in the entire story of the 2020 pandemic.