Tesla is set to report earnings on Wednesday after the bell this week and, as such, GLJ’s principal Gordon Johnson has released his look into what Q4 numbers could bring. Johnson estimates that Tesla will beat expectations in both its 2021 shipment guidance and its Q4 2020 net income.

In a note published Tuesday, January 26, Johnson notes that Tesla’s Q4 net margins are expected to come in at a “magical” industry best without any good reason for doing so:

TSLA’s 3Q20 COGS margin improvement of +7% was the best seen since 3Q18, and second best since 1Q17. That is, as the math above shows, to simply say battery prices are falling does not appear to be a valid explanation for TSLA’s seemingly impressive margins.

The better margins will come despite the fact that, as we have consistently documented here on Zero Hedge, Tesla continues to lower prices across the board in both the U.S. and China. 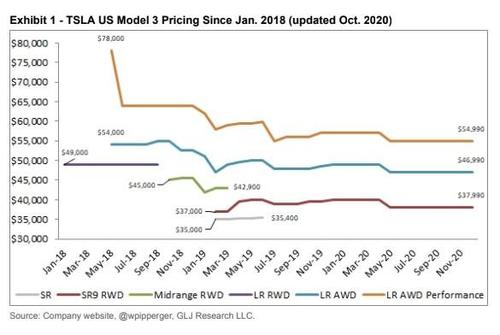 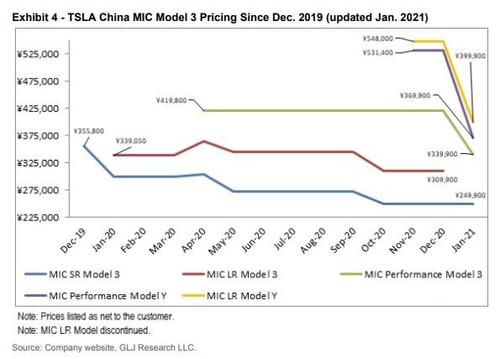 In fact, Johnson admits: “We feel there are more questions than answers around how TSLA is achieving such seemingly impressive automotive margins quarter-over-quarter.”

Johnson says he thinks there is risk to Tesla hitting its full year 2021 shipment guidance. He puts the primary risk at new domestic players in China: 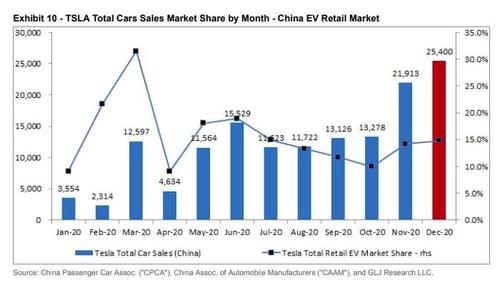 In Europe, Johnson notes that Tesla’s EU sales fell 10% in 2020. He sees VW taking the title of “leader in the EV space” in the EU and says that Tesla’s new Berlin factory won’t make a “material difference”.

We continue to hear this argument from the “smart bulls”. However, while E. Musk predicted TSLA would sell 1mn cars in 2020 in 2018, TSLA ended up selling just under 500K cars in 2020 (despite stated capacity of 840K cars exiting 3Q20). And, while many “smart bulls” attribute this the COVID pandemic, TSLA cut the price for its cars 15 times in 2020 to get to 499.550K cars delivered in 2020. In short, we don’t see this as sustainable (profitless growth via deep price cuts is not a sustainable business model)

Peter Schiff: The Reality That Nobody Wants To Acknowledge

WATCH: The Future of Vaccines