GLJ Research’s Gordon Johnson, who has been a consistent Tesla bear, has had time to review Tesla’s Q4 results and has published a note to clients noting that Tesla “lost money selling cars for the fourth straight quarter”. Johnson also points out that cost cuts have “slammed” Tesla’s margin.

“In short, we believe this is a “mystery” Tesla investors will likely need to come to grips with this year. Stated differently, we believe Tesla investors will have to decide if it matters if Tesla grows deliveries 50%/yr if it means net profits go down as sales increase – due to excessive price cuts as the competition is rendering TSLA’s cars irrelevant (we do not see this as a sustainable business model).” 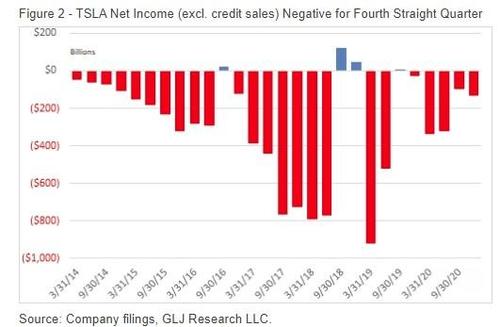 He then asks a reasonable question about whether Tesla’s valuation makes sense, given the fact that the company’s CFO has outright disclaimed that Tesla won’t be able to rely on selling EV credits much longer:

“Stated differently, with Tesla posting a $130mn loss (excl. credits) on a record 180K in deliveries, guiding at least 749.325K deliveries on 1,050K of car capacity, expecting 1 semi to be delivered in 2021 – and the CFO outright exclaiming that the credits that have padded its net income are temporary and will go away – is owning Tesla better than owning all the other car companies combine.” 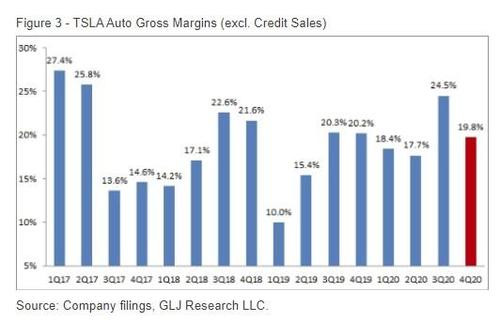 It’s a great question, but it’s been one the market has been able to ignore thus far, thanks to skyrocketing indices and out of the money call buying providing both the cover and the catalyst for Tesla’s current share price. 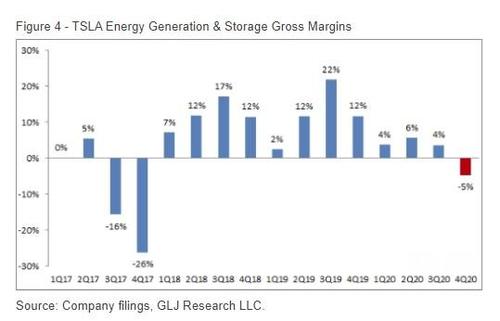 Johnson is right, however – at some point, reality will once again matter – the question is “when”. He notes that not only does sentiment have to continue for the share price to stay inflated, but that analysts and investors continue to have to make piece with Tesla’s ballooning A/R and other accounting anomalies.

“We remind our readers that all of this has to be accepted, despite: (1) $721mn in GAAP profit on the year vs. A/R growing from $543mn to $1,884mn (showing shareholders will likely never get “their money back” via a dividend, and Tesla does not generate cash but does generate mysterious IOU’s), (2) unit COGS flat 3Q20-to-4Q20, despite China cranking out 50% more cars (suggesting spreading fixed costs over more cars doesn’t help in audited quarters), and (3) FSD appearing years off any mass deployment.” 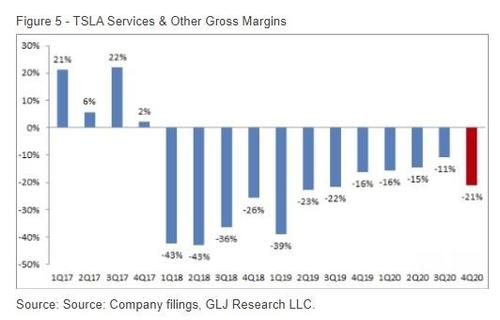 Finally, loud enough for the last shareholder standing in the back, Johnson plugs away at more fundamental arguments – including the fact that Tesla’s ROIC falls below the company’s cost of debt capital.

Robinhood App Plunges Back To One-Star Amid GME Debacle