For many liberals, the “safety” and security of a government cocoon is the pinnacle of personal development and self-expression, and by extension, working for the government is the apex of one’s professional career. It’s why there are over 9 million Federal workers (or is that “workers”) in the US. Luckily, that number is still a minority, with the bulk of the US labor force in the private sector helping keep America’s economy vibrant over the years despite the relentless encroachment of statism.

To be sure, the US government – in its attempts to become ever bigger over the years – has aggressively tried to attract as many workers to its ranks as possible over the generations, and in the 1980s it was offering impressive wage gains to government workers of well above 6%.

However, things have changed, and according to the latest personal income report released this morning, it is now punitive to work for the government because in November, wages and salaries for government workers declined by 2.3% compared to last November, the biggest decline on record. 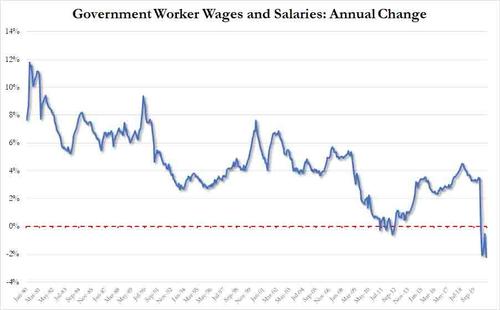 A closer look at recent trends reveals that this is a purely a government worker feature, with wages for private sector employees rebounding soundly from their post-covid crash lows and fast approaching pre-crisis levels. 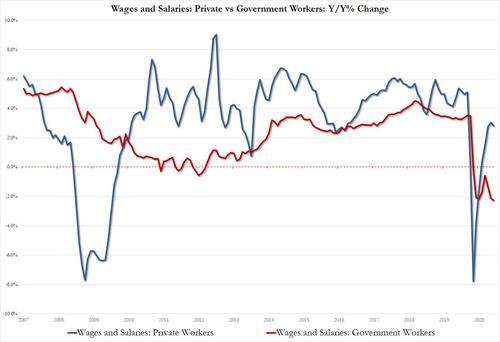 No wonder the deep state is pissed off.

While there is no immediate explanation for this surprising drop in government compensation, we are confident that one of the first things the Biden admin will tackle is how to make this number as high as possible because the last thing the ever-bigger government machine wants in its transformation to pure socialism, is to be seen as uncompetitive to better-paying private sector alternatives.