Sen. Lindsey Graham (R-S.C.) on Sunday accused President Joe Biden of playing “the race card” on a newly enacted law that seeks to improve the integrity of elections in Georgia.

“You know what’s sick is [to] have the president of the United States play the race card continuously in such a hypocritical way,” Graham told Fox News Sunday.

Graham made the remarks in response to a question from host Chris Wallace on the 95-page Georgia law (pdf) passed on March 25 by the Republican majority House and Senate. 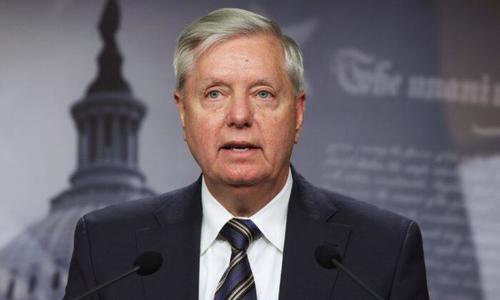 The bill passed the state House by a 100-75 vote and the state Senate by a 34-20 vote, with no Democrats backing the reform measures.

The Republican-led reforms were to ensure accessible but fair voting, including requiring photo or state-approved identification to vote absentee by mail. The law also mandates that secure drop boxes be placed inside early voting locations, with constant surveillance, and it expands early voting across the state to address a key Democrat concern.

The law, the Election Integrity Act of 2021, also shortens the election cycle for runoffs to four weeks from nine and requires a minimum of one week of early voting before Election Day.

On March 26, during his first solo press conference, Biden criticized the law as “a blatant attack on the Constitution and good conscience.”

“It adds rigid restrictions on casting absentee ballots that will effectively deny the right to vote to countless voters. And it makes it a crime to provide water to voters while they wait in line—lines Republican officials themselves have created by reducing the number of polling sites across the state, disproportionately in Black neighborhoods.”

He labeled the law as a “Jim Crow in the 21st century,” referring to Jim Crow laws that enforced racial segregation in the south.

“It must end. We have a moral and constitutional obligation to act,” Biden said.

“What I’m worried about is how un-American this whole initiative is. It’s sick, it’s sick.”

Graham told Fox News in response, “Every time a Republican does anything, we’re racist.

“They [Democrats] use the racism card to advance a liberal agenda, and we’re tired of it. H.R. 1 is sick, not what we’re doing in Georgia,” Graham said of the divergent Democrat-led election reform bill.

Biden has called on Congress to pass the Democrat-led H.R.1—For the People Act—a bill that seeks to federalize and make permanent many of the election reforms adopted as temporary measures in 2020 by a handful of states in response to the CCP Virus pandemic.

The president has said he would sign the bill into law if it reaches his desk.

The Epoch Times has reached out to the White House for comment.