Submitted by Mish Shedlock of MishTalk

Cash Out Refis Exploding Once Again

Americans extracted more cash from their homes through cash-out refinancings in 2020 than in any year since the financial crisis.

U.S. homeowners cashed out $152.7 billion in home equity last year, a 42% increase from 2019 and the most since 2007, according to mortgage-finance giant Freddie Mac. It was a blockbuster year for mortgage originations in general as well: Lenders churned out more mortgages than ever in 2020, fueled by about $2.8 trillion in refis, according to mortgage-data firm Black Knight Inc.

“The support coming from home equity is unparalleled in helping smooth out the degradations from Covid,” said Susan Wachter, an economist and professor at the University of Pennsylvania. “For those who are in the position to refinance, it’s a major source of support.”

Cash-out refis got a bad rap after they exploded in the run-up to the 2008 financial crisis. Borrowers tapped their homes like they were ATMs. When home prices plunged, they were left owing more than their homes were worth. Now, in 2021, many economists expect home prices to keep growing. 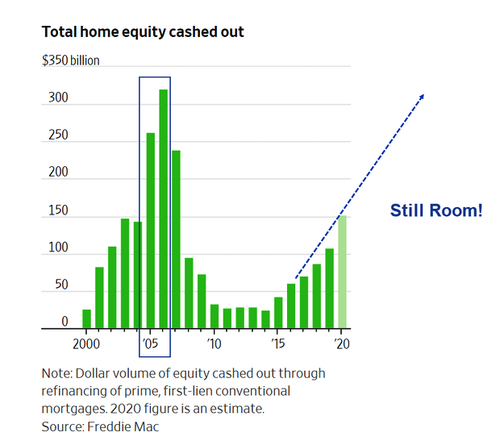 This reminds me of a post I did in 2005 (Yes, I have been blogging that long, even longer).

I think it’s too late.
In fact I know it’s too late.
How do I know?
The following Email I received tonight should explain it nicely.
When you see stuff like this, not only is it too late, it’s way too late.

The Email I referred to was the image itself.  At the time, I was also commenting on cash-out refis, housing speculation, and numerous other aspects of the housing bubble.

I was early. Depending on the section of the country, there was at least one more year left of the bubble before things started to implode.

Fed Chair Ben Bernanke dissed all discussion of bubbles even after the bubble already burst.

I have many housing charts in the above link.

The Bad Rap is Different This Time