Social engineers are pushing tiny 200-sq-ft Ikea houses as the solution to climate change in another example of how our living standards are set to be lowered. 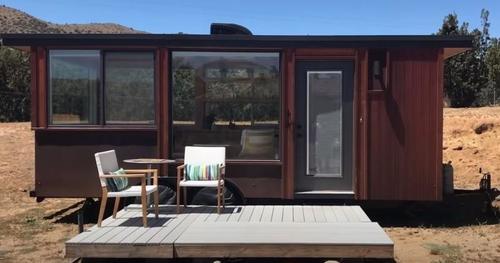 In an article entitled ‘Ikea tiny homes can help fight climate change by giving small footprints a big toehold’, Carl Pope, former head of the Sierra Club, gushes over the micro-homes (basically trailers) that sell for $47,550.

“Housing is an important source of climate pollution — directly responsible for about 5 percent of greenhouse gas emissions in the United States plus their electricity. Given Ikea’s emphasis on recycled and reusable materials, the company seems likely to accelerate some important shifts in the housing market. Ikea will also almost certainly take advantage of what it learns in the “tiny” segment of the building market to establish a foothold in the broader, potentially highly green, manufactured building space,” writes Pope.

While solar panels would struggle to heat larger homes, this isn’t an issue for the tiny homes, so long as you’re content living in a box.

“The use of rooftop solar panels to generate power and the replacement of propane heating with a heat pump run by those solar panels is likely to become the standard in many states for manufactured homes,” he adds. “They will gravitate toward all-electric mobile homes because propane is a significant factor in the threat of fires to mobile home parks.”

“When utopia is achieved, we will be forced to live in tiny playhouses — for our own good, because living in a rabbit hutch will improve the weather,” writes Dave Blount.

“Winter could mean praying for sunny weather so that the heat comes on. That way we will be cozy and snug when we are placed under house arrest the next time a virus comes around.”

As we previously highlighted, last year CNN promoted the idea of young people living in ‘pods’ in the center of huge cities where they have no privacy.

They’re called OPod Tube Houses and literally consist of reclaimed bits of industrial piping renovated inside with other left over pieces from building sites to make them into micro apartments.