Authored by Paul Joseph Watson  via Summit News (emphasis ours)

Following the riot, during which Trump supporters stormed the Capitol building, Schumer gave a speech on the Senate floor in which he said January 6 was a date which would “live in infamy,” mirroring President Franklin Roosevelt’s speech after the Pearl Harbor attack. 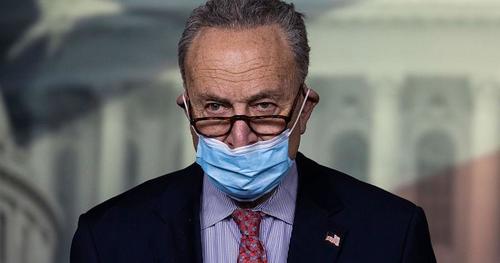 “It is very, very difficult to put into words what has transpired today. I have never lived through or even imagined an experience like the one we have just witnessed in this Capitol. President Franklin Roosevelt set aside Dec. 7, 1941, as a day that will live in infamy. Unfortunately, we can now add Jan. 6, 2021, to that very short list of dates in American history that will live forever in infamy,” said Schumer, before going on to label rioters “domestic terrorists.”

“Franklin Roosevelt set a day aside that will live in infamy. Unfortunately, we can now add January 6, 2021 to that very short list of dates in American history that will live forever in infamy.” pic.twitter.com/mVMrVbuxQ8

Greenwald shot back by lambasting Schumer for his hyperbolic comparison.

“Obviously, it’s obscene to compare yesterday’s events at the Capitol to 9/11 or (as Schumer did) Pearl Harbor: obscene and reckless,” tweeted Greenwald.

For that simple attempt to urge restraint and deliberation, Lee was vilified as an anti-American who harbored sympathy for the terrorist attackers. Yet 20 years later, it’s hard to deny it was actually brave prescience, and that voices of restraint at times of trauma are vital.

The journalist went on to urge Americans to exercise “restraint and deliberation” in response to yesterday’s events.

The attack on Pearl Harbor killed over 2,400 Americans and wounded a further 1,178.

Four people tragically lost their lives as a result of yesterday’s chaos, all of whom it appears were Trump supporters who stormed the building, including a 14-year Air Force veteran who was shot in the neck by police.

To compare what happened yesterday to Pearl Harbor or 9/11 is clearly demented and part of a ploy to exploit the riot to justify another political crackdown.