Guatemalan President Alejandro Giammattei declared emergency measures Monday along the Guatemala–Honduras border as new reports suggest a new migrant caravan may be forming in Honduras, according to Associated Press News.

The emergency order declares mass gatherings and demonstrations illegal for the next 2-5 weeks in five Guatemalan provinces that border Honduras.

In a statement, the Guatemalan government defended the new public health order by saying, “groups of people could put at risk the life, liberty, security, health, access to justice, peace and development” of Guatemalans. A similar order was announced in January to squash previous migrant caravans. 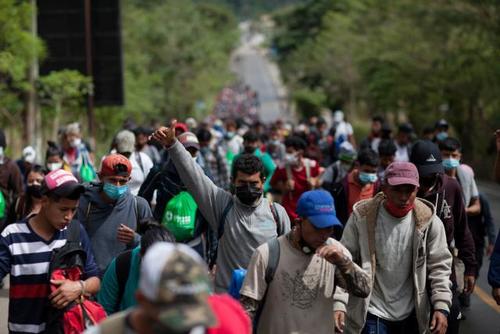 Threats of another migrant caravan from Honduras with plans to travel to the US come as a US-Mexico border crisis worsens in recent months. The number of migrants attempting to cross into the US has surged, with at least 100,000 arrested in February.

A flood of migrants has been racing towards the Mexico–US border under the Biden administration after President Biden said he’ll reverse former President Trump’s immigration policies and allow many migrants a pathway to citizenship.

The border crisis is worsening by the day as President Biden told migrants to stop coming to the US after begging Mexico’s president to help stem the flood of illegal migrants. The surge of migrants has overwhelmed the federal government’s ability to process them.

Days ago, Oklahoma Sen. James Lankford (R) gave a first-hand account of the chaos at the US-Mexico border – joining Texas GOP Sens. Ted Cruz, and John Cornyn for a tour of the deteriorating border conditions. Lankford tweeted pictures of the US’ migrant camps.

For a side-by-side comparison, the first photo is from my trip to the border in 2019–the second is from today. Plenty of space to walk around and safely spread out. Tell me this isn’t a crisis. https://t.co/ING6lsNYor pic.twitter.com/ujQXNxkQKD

Many of the migrants reaching the US-Mexico border are fleeing violence, drugs, and corruption in Honduras. With the threat of another caravan forming, the Biden administration might want to reconsider finishing President Trump’s border wall instead of halting construction.

Putin To Test Nuclear Missile Capable Of Striking US By Autumn

The Return Of Industrial Warfare