The bond market has had difficulty sustaining rates at or near the Fed’s neutral rate projection, and we see no reason to expect a different result this time. The selloff has largely run its course. https://t.co/m2RQTdfV7R pic.twitter.com/ysuDGOrd23

In fact, for foreigners, buying USTreasuries on an FX-hedged basis offers the biggest yield advantage over domestic sovereigns since 2014… 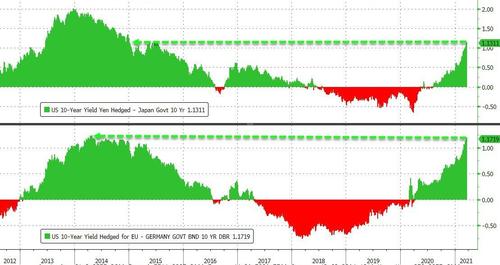 But, Guggenheim warns that “conflicting guidance” from Fed Chair Powell is potentially holding back bond investors.

Last week’s FOMC meeting showed that the Federal Reserve (Fed) intends to maintain rates at zero even when the economy overshoots traditional measures of full employment and price stability. But Fed Chair Jay Powell stopped short of pushing back on the bear steepening of the Treasury curve.

Powell is giving conflicting guidance to bond investors. Dovish forward guidance is bullish for the short end while the Fed’s efforts to lift inflation expectations have been bearish for the long end. The belly of the curve is caught in the middle.

The question investors face is whether the selloff has more room to run. Our analysis suggests it has largely run its course. The market is now pricing in a neutral rate of 2.35 percent, nearly in line with the Fed’s optimistic long run dots. The chart below shows that the bond market has had difficulty sustaining rates at or near the Fed’s neutral rate projection, and we see no reason to expect a different result this time. Nor do we expect the Fed to revise up its neutral rate estimate. 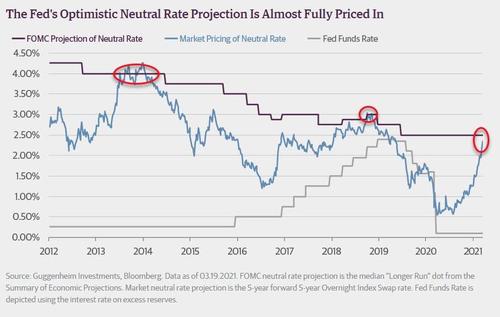 While the Fed has succeeded in lifting growth and inflation expectations, it now has a different problem: the market is pricing in premature rate hikes, as the chart below shows. The upshot for bond investors is that the steeper yield curve now offers an attractive carry and rolldown profile. 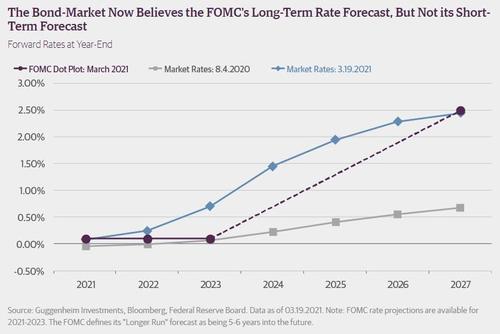 If the Fed is as patient as we expect it to be, total returns for core fixed income investors have the opportunity to be much better going forward than they have been in the recent past.

We’re On A Highway To Hyperinflation