Some Iowa State University students are upset at members of a student organization for promoting an event about 3D-printed guns in the wake of two mass shootings, one in Boulder, Colorado, and the other in Atlanta, according to Ames Tribune.

“Are you curious about 3D-printed firearms? Are you curious about home gunsmithing at all? Are you looking for a new hobby? Join Students for 2A on Monday, the 29th at 7 PM in Carver Hall room 305! We will be presenting on the recent history and legality of homemade firearms, talking about some 3D-printed projects we completed, talking about how you can get started, and, most importantly, answering the questions you have! This presentation has been a year in the making, and if you are interested in firearms, it is not one you want to miss!” 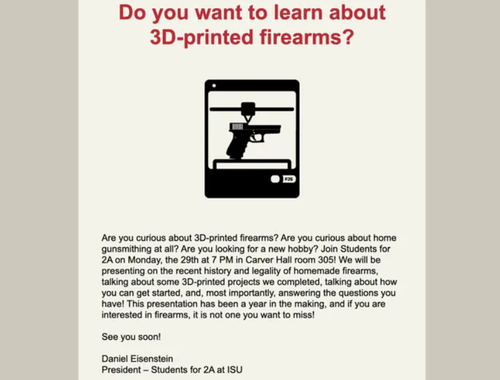 Some students are upset with the pro-Second Amendment rights group, whose email announcement of the event was poorly timed.

An open letter to administrators criticized the email’s timing and had more than 100 signatures, the Iowa State Daily reported.

The letter said members of Students for 2A “did not understand the emotional intensity the events of the past week have taken on students.”

“The University should release a statement condemning the timeliness, insensitivity, and potentially harmful and triggering nature of the email,” the letter said. “The student organization, Students for 2A, should also release a statement acknowledging the harm caused.”

Iowa State spokesperson Angie Hunt said members of Students for 2A followed university protocol in planning the event, adding that the presentation is “not a demonstration of 3D printing or weapons.”

“While not everyone may support the topic, all students have the right to gather and discuss issues that others may feel are controversial or do not align with their values,” Hunt said in a statement. “We understand our students’ concerns, and as a campus community, we mourn with those who have lost loved ones in the recent violent mass shooting tragedies in Boulder and Atlanta.”

According to the Students for 2A’s Iowa State website, the group has 45 members and is affiliated with the National Rifle Association. Under “useful links,” the group links to a website called CTRL+Pew, which appears to be a database of 3D-printed weapons. Digging further into CTRL+Pew, there is an entire library of weapons that anyone can easily download and print.

The timing of the email by members of Students for 2A may have been a little insensitive, considering most colleges are super liberal and don’t tolerate guns. What’s more interesting is that younger generations are intrigued by 3D printers and their ability to print weapons.

We noted last month that anyone can 3D print this weapon at home for under $350.

“Corners Were Being Cut”: Baldwin Shooting Already Has The Makings Of A Blockbuster Tort Action