Authored by Chris Farrell via The Gatestone Institute,

A lot has been written about H.R.1 — the so-called “For the People Act of 2021.” Former Vice President Mike Pence has opined on the bill. The Editorial Board of the Wall Street Journal sounded the alarm back in January. The editors of National Review come right out and call it a “partisan assault on American democracy.” 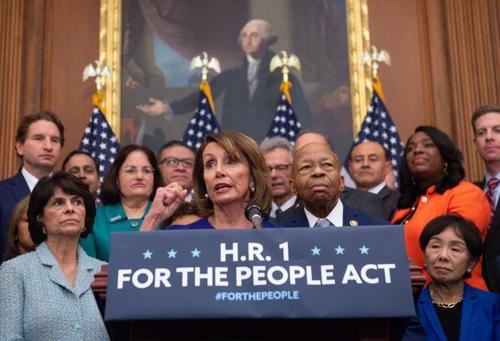 H.R.1 purports to, “expand Americans’ access to the ballot box, reduce the influence of big money in politics, strengthen ethics rules for public servants, and implement other anti-corruption measures for the purpose of fortifying our democracy, and for other purposes.” The Bill is 791 pages long.

Here are just a few of the more egregious federal power grabs in H.R.1 concocted against the 50 states that run elections under the U.S. Constitution:

There is a lot more, and it gets worse. Substantially worse. There are First Amendment restrictions on political speech and on the support or opposition of a bill and/or a candidate. Remember: This is supposed to be “fortifying our democracy.”

If you are interested in a “through the looking glass” annotated analysis of H.R.1 — then head over to the Brennan Center for Justice. They are happy to explain how those pesky constitutional rights can be whittled down to something more “fair” for everyone. For example, the Brennan Center analysis confidently assures readers about how H.R.1 “affirms Congress’ power to protect the right to vote, regulate federal elections, and defend the democratic process in the United States.” It seeks to airbrush Article I, Section 4 — The Elections Clause — from history and practice. The Clause directs and empowers states to determine the “Times, Places, and Manner” of congressional elections. H.R.1 would federally strangle the Elections Clause.

In order to find our way out, it is helpful to know how we got into this terrible predicament. The foundation for the madness of H.R.1 is legal positivism, a thesis, according to the Stanford Encyclopedia of Philosophy, which states “that the existence and content of law depends on social facts and not on its merits.”

H.R.1 is nearly 800 pages of meritless, militant, social engineering targeting the foundations of the U.S. Constitution, voting rights and political free speech — all dressed-up as being “for the people.”

Authoritarians — socialists and communists of different stripes, geography and eras — like to use legal positivism because it allows enormous latitude to design, implement and (especially) enforce whatever they dream up as the way things ought to be. What better way to design a worker’s paradise? Or — hypothetically, of course — to make sure that a stolen election stays stolen, is never audited, and lays the groundwork for reproducible results for the next century?

It’s neat and easy under legal positivism. Draft up a one-sided, detailed plan (loaded with outrageous schemes) of nearly 800 pages that NO ONE will read or understand. Ram it through the one-party legislature and have the same party’s president sign it into law. Presto! — cheating has become nice and “legal.”

For readers who find this technique troubling, or wonder why it does not sound like the great tradition of debate and compromise described in our founding documents and political history, there is good reason. The United States was founded on a theory of Natural Law, which adheres to universal moral principles for ethical and legal norms of human conduct whether a particular government recognizes them or not — that is, essentially, the antithesis of legal positivism. There are now generations of Americans who have never been exposed to these ideas.

The “mind wipe” of Americans for all that is authentic and real about the foundation of our country as a constitutional republic began through the education system. We allowed people like Howard Zinn to dictate the historical framework for understanding who and what we are as Americans for millions of high schoolers and undergraduates. An intellectual diet of relativism, critical theory, deconstruction and subjectivity. That delegation of our educational standards was reckless, lazy and stupid. When you do not know any better, how can you act any better?

The co-opting and hollowing out of our education system is the main explanation for why and how we are wrestling with the loss of the Republic by legislative militancy, topped off with the Executive pen stroke.

This is terribly serious stuff and no one is telling you WHY you are losing. There is a lot of hand-wringing and outrage, and rightly so. But that nagging feeling tormenting you about why America seems to be slipping away — and why everything you believed in is now being turned into a crime or a shaming social media joke — well, no one is explaining that to you. Until now.

Now is the time to snap out of our Covid-induced somnolence and passivity. If President Joe Biden’s election “victory” wasn’t enough to get your attention — then H.R.1 must be. Please let everyone influential know, clearly and politely, exactly what you think.

2021 Kickoff: Looking Through the Headlines with Mike Green