Happy Days At The Gas Pump Are Over As Prices Soar

When the virus pandemic first hit early last year, Americans were locked down in their homes as gasoline demand plunged and prices crashed. Last April, the nationwide average for gasoline was around $2. According to AAA, prices are surging nationwide, up 32 cents in the previous month to $2.796 for regular.

On Monday, regular gasoline in Los Angeles County rose for the 27th consecutive day and 47th time in 48 days, increasing to $3.81, the highest since Dec. 3, 2019. Average prices for crude products in the metro area have been on a tear, resulting in a price shock for many consumers who are still battling food and housing insecurities, along with job loss as they wait for the next round of stimulus checks.

AAA said average gasoline prices in Los Angeles had risen 46.5 cents in the past 48 days.

Happy times at the pump are over as crude product prices continue to rise. 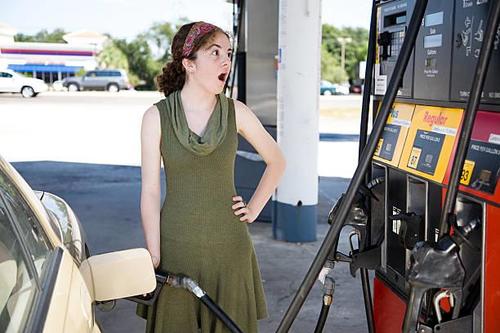 GasBuddy analyst Patrick DeHaan told Fox News that one reason for the jump in prices is due to increased demand. Still, more importantly, he said the Organization of the Petroleum Exporting Countries (OPEC) “is not opening the spigot.”

OPEC’s decision last week inspired Goldman’s Damien Courvalin to raise his Brent forecast by $5/bbl, to $75/bbl in 2Q and $80/bbl in 3Q21: “This increase in our price forecast reflects stronger time spreads, with our updated inventory path consistent with $5/bbl additional backwardation over the next six months relative to our prior forecast.”

… while this is excellent news for the energy industry, Wall Street, and value investors who’ve plowed into XOM, this is terrible news for consumers where more of their upcoming stimulus checks will go to not only energy costs but also food (as we recently noted, food inflation is off the hook). 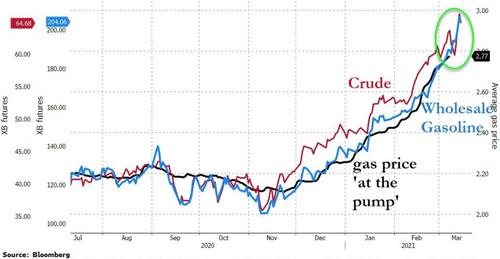 Using the three-month rate of change – one starts to notice the latest surge in prices at the pump should be viewed as a “price shock.” How long until gasoline prices reverse? 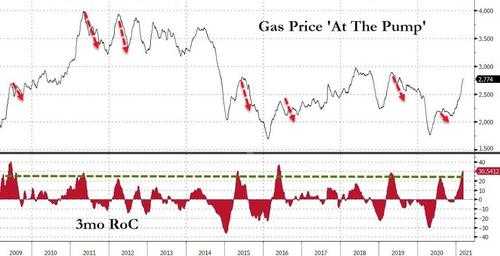 So, where’s the breaking point for consumers already struggling with their finances because of the economic downturn. Now the working-poor, who don’t own assets, are getting crushed even harder in the “K-shaped” recovery as energy and food prices soar. 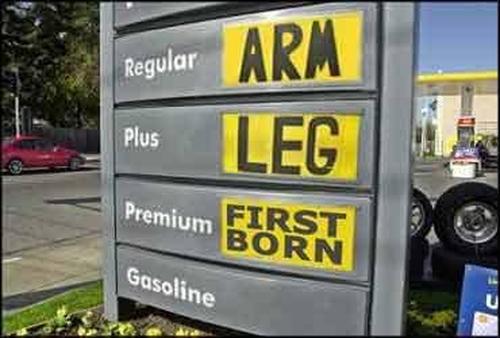 Is this Biden’s fault? Hard to say but stirring the pot in the Middle East, closing the Keystone Pipeline, discouraging investment in fossil fuels, and banning fracking on government land probably didn’t help supply (although seasonality and the Texas storm also impacted in the short-term, and of course OPEC+).

The Collapse Of Greensill: ‘Unwise Enablers’ & A Dearth Of Due Diligence