HashMasks, CryptoPunks, & More… Inside The Multi-Billion-Dollar Market For Tokenized Art

Via The FinTech Blueprint substack,

We want to talk about Hashmasks. And in particular, the one selling for $650,000. That, in the context of the $3.5MM Beepl art sale, and $1.7MM Rick and Morty NFT sale. More deeply, we want to talk about financial assets, the value of things, and the additive nature of new channels and ecosystems as old ones become commodified. 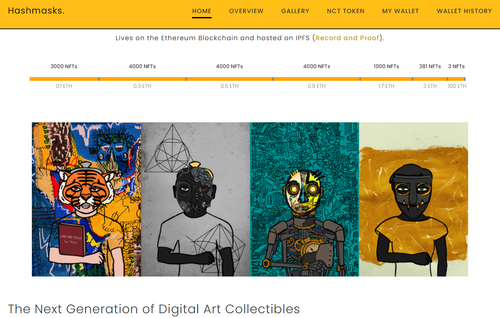 The reader will be familiar with the traditional asset classes – equities, fixed income, with maybe some cash equivalents and alternative investments. These represent somewhere around $50 to $100 trillion of value. They are core capitalist assets, in the sense that they represent various financial claims and obligations on the abstractions we humans call companies and governments.

You can’t eat a company.

But you can eat a piece of bread. Stick with us here. 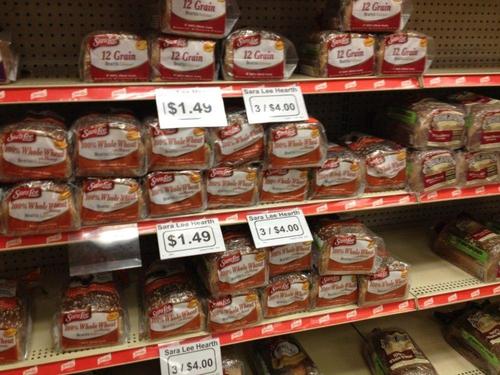 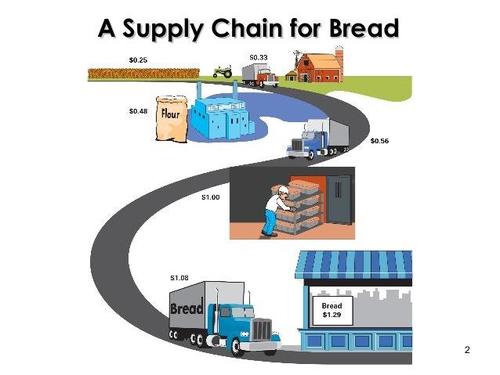 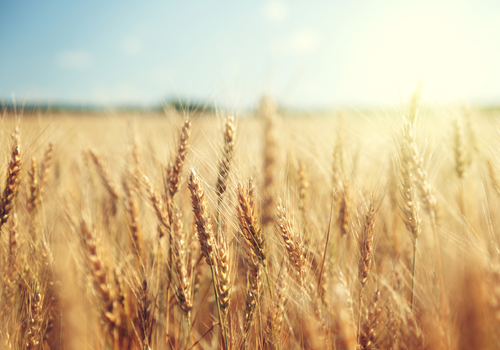 Bread is wonderful. It is also cheap at $1.50 a pack (give or take). It is made from wheat, a plant that grows from the ground. It takes 4 months from seed to harvest, and then requires a massive industrial value chain to be collected, turned into flour, shipped on diesel-burning-trucks across the country’s highways, and into bakeries, where waged-employees labor in factories to make what you and I buy in the supermarket.

If you want something with “fundamentals” that is “grounded” and “real”, things can’t really get much better than bread. It mixes the mana from the Earth, with the labor of the human, with the invention of technology, to solve an existential problem. And to most of us, it is essentially *free*. 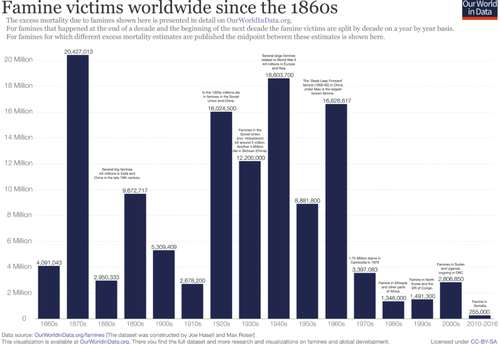 You eat bread so you don’t starve and die. Very many people have died from starvation. This is a 20 million-people-per-decade problem. You would think that something that is literally a life-saver would be worth a *lot*. But it isn’t on the margin. Bread is not rare — it is a commodity with a massive, undifferentiated supply.

Put another way, the “market” values your weekly sustenance at less than your Netflix or Spotify subscription. A video game on Steam might cost $50, as does a season of the Sopranos on Amazon, or a Kindle version of Game of Thrones. Aren’t those things “less important”?

Or on the value of collectible digital art. So here we have demonstrated that our intuitions about what is good and valuable for society are totally unhelpful in thinking about innovation and frontier assets.

Financial Assets as a Flag

Going back to our point about the $50 trillion of financial asset classes, those tend to be so abstract that the average investor treats them a bit like magic. Yes, the ownership of a share of AAPL stock does grant you certain legal rights, enforceable against a regulated corporation in some particular way under some particular circumstances, tied into a Rube Goldberg machine of exchange, clearing, and settlement, backed by “cash flows” generated by the sales of a kazillion iPhones, summarized in an annual report, and so on and so forth. For most people, this is voodoo. Buying AAPL stock is like buying a Tom Brady jersey. It is popular fashion. 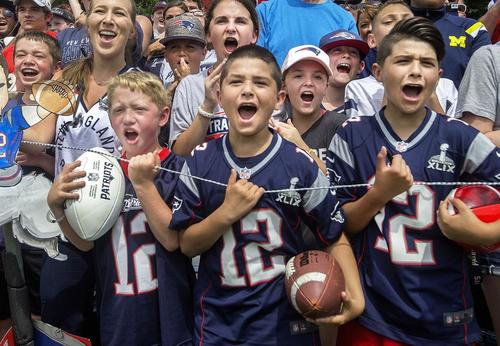 You are not buying the machine. You are buying a flag for your identity. That flag might be AAPL or AMAZON, or GME, or Bitcoin. The Bitcoin flag these days is a bit more fun. Invoking some computational octopus monster that coheres a forever-true ledger of monetary truth is not that different, in our collective consciousness, from summoning Warren Buffet’s “value investing” discounted cash flow approach as a personal virtue for stock selection.

We are not saying that there aren’t crafts-people, and crafts-robots, who actually do the computational work of assessing these values. We are instead saying that the rest of the market is just a bunch of free riders waving their flag around.

As another example, options are priced using Black–Scholes, because other market participants are pricing options using Black-Scholes, without understanding what the formula actually does, or its limitations. We can say the same thing for diversification using Modern Portfolio Theory, and its mega-printing of passive ETFs. Such flags can be carried around by an agitated subreddit. Or by an over-conditioned Wharton MBA, that has invested a lot of personal pride in navigating Excel without using the mouse. To go deeper into exploring the distinction between knowing things from first principles (e.g., how a blockchain works, or how a stock is valued) and uniting in a community to champion its reductive slogans, we recommend the collected writings in Less Wrong.

All this to say, the emotion-driven investor is not “irrational”. Rather, they are a socially-driven animal relying on socially-established consensus around expertise and narrative. They are an investor into “signals”. Thereby we conclude that (1) things that are existentially important to the survival of the species, like bread, are not valuable on the margin, and (2) that things that are abstract and incomprehensible in the extreme to the average person, like a $3,000 share of Amazon, are very valuable and subject to rising exponentially in value.

Meet me in the Middle

Not everything is some shared hallucination. 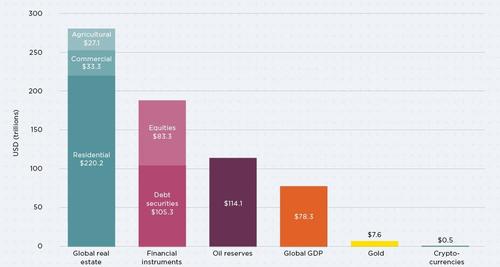 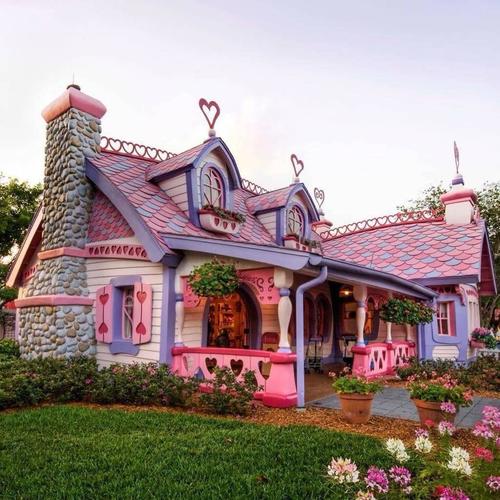 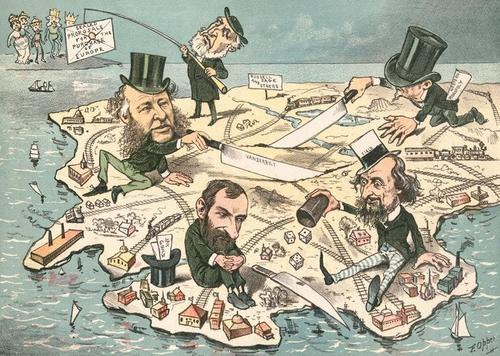 There are about $200 trillion worth of residential real estate, and another $30 trillion worth of commercial real estate. These are our homes, sky-scrapers, and cities. We can add to this tangible basket our infrastructure – roads, bridges, and train tracks. Given our obsession with the digital age, we may not remember the very tangible power of owning a rail-road monopoly.

On the media side, there is about $2 trillion of collected art worldwide, hanging in museums, stacked in galleries, or part of a large family office collection — of this, about $60B is turned into fees per year. In music, the intellectual property of songs accrues to owners and yields $10B in performing rights revenues.

One point that we want to land is that finance is embedded in all these different types of things we love and understand: our homes, our art, our music. Financial constructs are like clothes around their bodies.

Crypto Collectibles as the Growth Vector

This is deeply interesting and exciting, especially because we do not really know or understand yet where things are going to go. The current innovations are attempting to re-create analogies in the physical world. That will shift and transform into new frontiers. Just as we flagged DeFi in 2019 as the core engine for growth in 2020 on Ethereum, we flag NFT platform development as a core driver for 2021 and beyond.

Let’s get our data in order from Cryptoart.io and OpenSea. 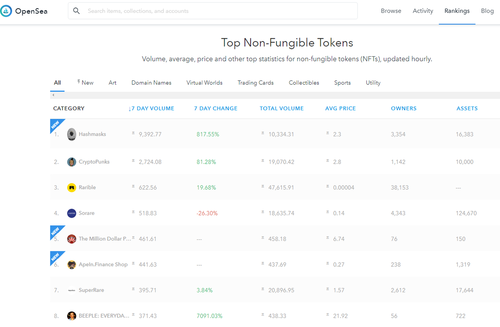 There is about $12MM of digital collectibles trading volume in January of 2021, with projects like Hashmasks and CryptoPunks dominating 7-day volume on OpenSea. There are probably about a hundred thousand existing NFTs, and a few thousands current participants in this market. The business model consists of a few gated platforms (e.g., Nifty Gateway, SuperRare), which act as galleries, editing and filtering a collection. The visual style of the work they select is vaporwave in palette, and delivered as glitchart or 3D renders.

Some NFTs are individual prints of artwork, similar to a painting made by Picasso, a song dropped by Beyonce, or a video uploaded by a YouTube creator. They are curated, bought and sold in reference to that object only. The value usually derives from *who* made the object, just as it does in traditional media. 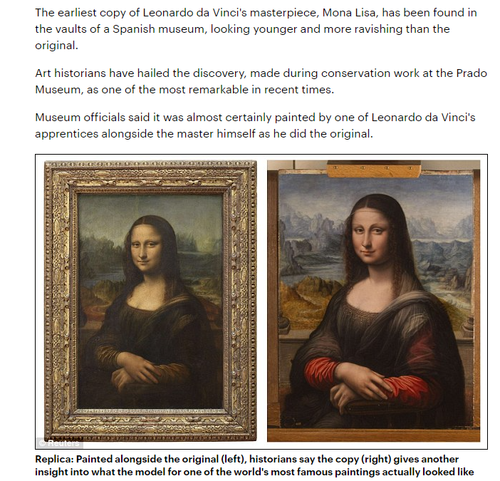 Another aside on value. The Mona Lisa is original and valuable. A poster of the Mona Lisa is not valuable, despite being nearly identical in visual information. A reproduction of the Mona Lisa, even if perfect stroke-for-stroke, is similarly not valuable, because it is not the original. Therefore, the art is valuable not for its collection of particular atoms in some particular order, but for its historical and social context. Recreating the object does nothing, because it does not contain the same social history.

With digital NFTs, the same logic is true. Just because you have an identical JPEG to the one anchored to the blockchain, does not mean you have an original worth anything, nor does your ability to look at it suggest anything from a collectible point of view. Owning the original means you own its particular history and meaning in the community. This is why the original CryptoPunks have sold for a cumulative $43M, as a piece of history of the first generative NFT collection on Ethereum. 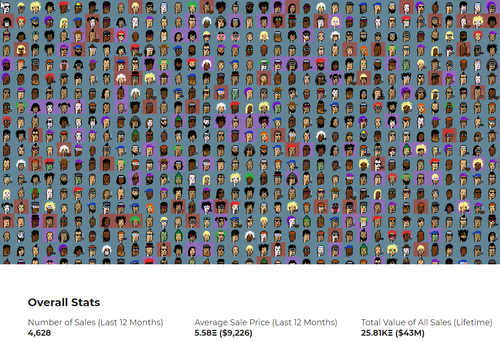 That brings us to the second point about NFTs. They do not have to be single, beautiful, genius renders. Instead, they can be large, distributed programs. CryptoPunks printed 10,000 editions of slightly different pixelated avatars. This is done through a software-based art system, and is inherently inclusive. Even if you do not own a “rare” CryptoPunk, you can still have one as a badge of participation in the overall movement. You can allow it to be your *flag*, going back to the point about Apple stock.

Hashmasks are similarly generative, though they are far more gorgeous, evoking Jean-Michel Basquiat in their procedural algorithms. 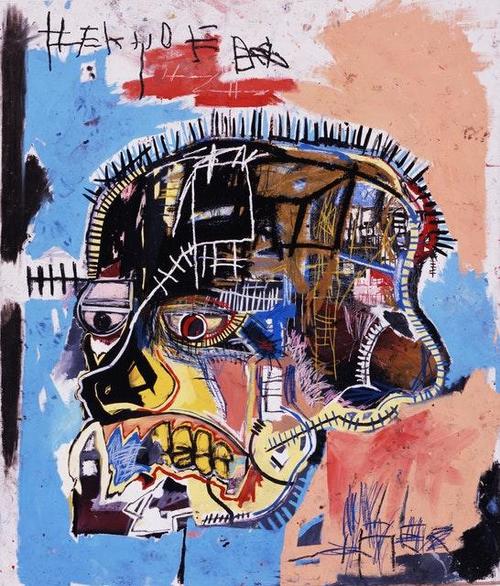 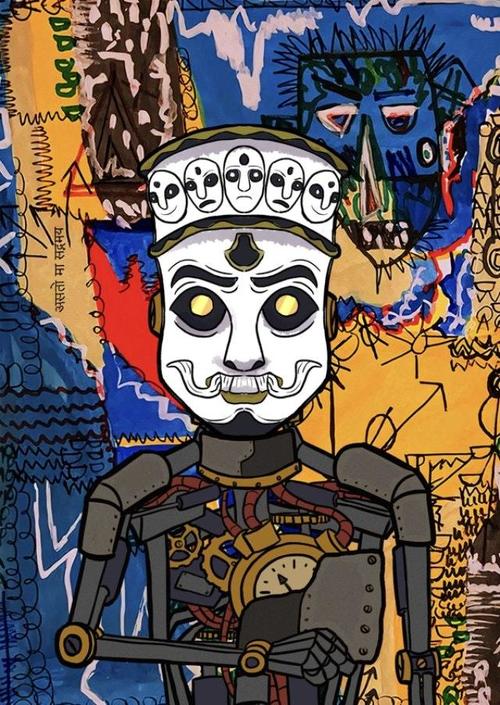 The print ran to 16,000 objects, with elements of various rarity. The most rare combinations are selling for over ETH 100, with the most common going for a few ETH. That is still several thousand dollars — a price wildly unaffordable for non-crypto denizens. It is far more expensive than our favorite loaf of bread. But what a stunning, bold flag it makes regardless! It answers the question of “who you are” for its digital owner.

There are, of course, financial features built into these mathematical marvels. First, a lottery. The NFTs were sold without revealing their rarity for several days — a mechanic identical to a lottery ticket, and the lootboxes from video games that countries like Belgium have banned for being too addictive. Second, a bonding curve, which can unfavorably be characterized as algorithmic ponzinomics. We don’t agree with that framing, but it is fair to raise the issue. And last, an “emissions” schedule of tokens from holding the NFT that allow you to change the name of the object, thereby impacting its scarcity and social history.

There are a few other mechanics worth flagging before we wrap up. Projects like Async Art allow people to buy layers within an artwork, and then change the layer as part of a participatory community effort. Others, like Cometh.io place the NFT collectible into a virtual world with actions that mirror its financial attributes — virtual space ships mine asteroids to receive real world currencies. For comparisons, think about the likes of Eve Online, the World of Warcraft gold farming, Second Life, and the various virtual reality blockchain projects (Decentraland, CryptoVoxels) come to mind as a path towards a Fortnite-like, NFT-based, multiverse.

All you need to do now is watch this space with curiosity. We will see an evolution beyond the editorial crypto art galleries of today, to TikTok-like neural-network-mediated creative spaces. We will see a deep melding of NFTs with complex DeFi primitives, like tranching for quality, collateralization and staking, as well as lending, borrowing, and exchange. The creative space is barely starting to be explored. Even if the “market” crashes in USD value, the underlying technology trends will persist.

This will not detract from the past, but it will add to the future. We quote Matthew Ball’s charts of the evolution of the music and gaming markets. 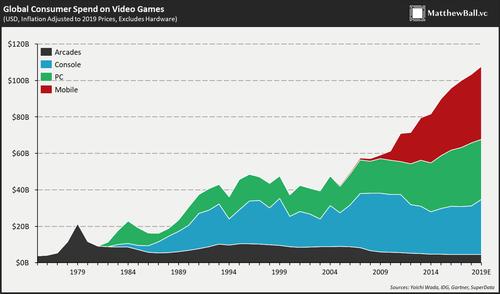 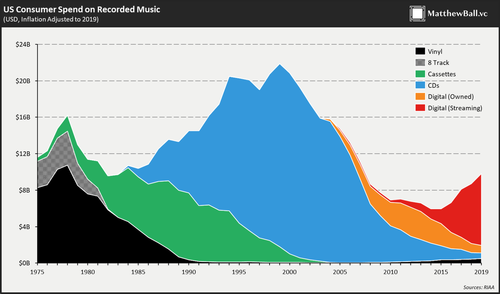 New channels and monetization methods are mana for creators. New platforms create gold rushes, excitement, and the conquering of frontiers. Mobile gaming added $40 billion of revenue to its overall market, while digital streaming in music rescued the industry with $5B+ of revenue. On blockchain, NFTs are now generating a profound pull for creative digital objects, and we are excited to see what comes next.

Here Are All Of Melvin Capital’s Crushed Put Positions