From Eric Peter, CIO Of One River Asset Management, who in November executed a $600 million purchase of bitcoin, then the largest public transaction to date, with the blessing of Brevan Howard’s Alan Howard. He has called bitcoin the most interesting macro trade he’s seen in thirty years in the business.

“Okay, so now please explain how these things are going to change the world,” asked the CIO.

He was not referring to the global transition to monetary/fiscal policy coordination which will interact with political, social and geopolitical forces to create a future quite unlike our recent past. We had already discussed that. He was asking about digital assets, blockchain, tokenization.

Virtualization. It is no longer possible to understand what is happening in markets, let alone what is to come, without developing a deep understanding of these things.

“It is not that they are going to change the world,” I said. “It is that they are already quietly changing the world, markets, and beneath the surface the process is accelerating faster than you can imagine.”

“I feel super lucky,” said an artist who calls himself Beeple, in an online forum, upon learning that bidders lifted his digital collage to $20mm in Christie’s virtual auction. “Everydays – The First 5000 Days” ultimately sold for $69.3mm to an investor who calls himself Metakovan, the founder of Metapurse, a fund that collects non-fungible tokens (NFTs). 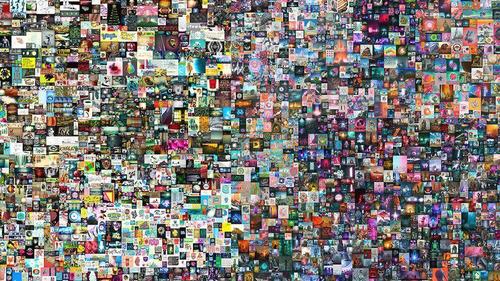 Metakovan paid in ether, which for the 7.70bln of earth’s 7.75bln people who do not yet know, is the digital currency of the Ethereum network. That network resides in the cloud, which virtually no one can quite comprehend even as it becomes integral to nearly all our activities.

And Ethereum, despite almost no one understanding what it is, now races toward becoming the foundation of a rearchitected global financial system.

“I didn’t see this coming,” remarked Beeple, now the world’s 3rd most expensive living artist. Such is the pace of change, that not even our artists can see beyond the horizon. We now live in a world where a Beeple can produce a virtual image, tokenized into an NFT, and purchased in a virtual auction by a Metakovan for 38,382 ether, settled on the Ethereum network, instantly, securely, all in the cloud, without the need for a legacy bank, or a single dollar.

Every aspect of the transaction, from Beeple’s creation of something from nothing to Metakovan’s acquisition of something in exchange for nothing, is high performance art. Sublime. A testament to human imagination, ingenuity, evolution. A glimpse of a wild, unrecognizable future.

“I feel like I got a steal,” said Metakovan, transmitting his ether to Christie’s. Naturally, unimaginative skeptics remain stuck in the past, seeking reckless safety in yesteryear’s risk-free assets, or else hedging fears of monetary debasement with investments that will work if the virtual future resembles the industrialized 1970s.

The hostile pundits, of course, see manias in all things digital. But throughout human history, not a single bubble ever burst when virtually no one understood what was going on. Rather, that was when the fun had only just begun.

Wait What? Everything you will ever own or have ever traded will be tokenized someday in some way. Take art. A token will be generated by a smart contract and permanently linked to the work. Both ownership and authenticity of the art is verifiable. That token can be traded. Ownership can be split, allowing fractional tokenized ownership. When the piece is sold in the future, the artist can earn a portion of the proceeds if that was built into the contract. Anything can be built into these new contracts, embedded into the code, instantly processed, in perpetuity.

Since NFTs are potentially the biggest securitization scheme in history (every asset is eligible, that’s $500 trillion), how long until Goldman launches Collateralized NFT Obligations

One Hand: At the 2000 peak, how many friends owned loads of internet stocks? How many explained why those companies would change the world? How many traded dotcom stocks actively? In 2007, how many were highly levered to housing? How many believed real estate never goes down? Or believed they were experts? How many flipped a house? And how many do you now know who are highly leveraged to digital assets? Or understand how they work? Or could explain the $69.3mm Beeple NFT transaction? Could you count them on just one hand?

An Amusing Look At Brexit Scare Stories Versus What Actually Happened

Will Postal Service Parcel Rate-Hikes Cause A Shipper Rethink?