Last night, we warned that, as hedge funds are squeezed on their shorts, they will likely be forced to sell their most popular and liquid longs.

Yet for once (it would appear), wallstreetbets is actually behind the market, because a quick look at some of the industry’s favorite longs shows that they got hammered just as the most shorted names were soaring, as hedge fund sharks – smelling blood in the water – starting taking bites out of their wounded peers. Smid-cap hedge fund growth darlings like Roku, Peloton and Square tumbled as much as 6% on Tuesday as the short squeeze rampage entered into its third day. Not coincidentally, Bloomberg notes that Goldman’s Hedge Fund VIP ETF which tracks hedge funds’ most popular stocks, slumped for a fourth straight day, the longest stretch since October even as the company’s basket of most-shorted names soared 15% during the same period.

Unprecedented divergence by historical standards: Despite being not profitable or running challenged business models, our most shorted basket rallied +300% off March lows. The desk notices that most shorted names tend to outperform during periods of reflation on renewed opportunism on higher growth potential for challenged companies. However, the magnitude of this move has far exceeded our expectation and pushed our most short basket to a 6% premium above sell-side consensus price target (first time since our baskets went live) and 85% above 200-day ma while short interest as of float of the market hits the lowest levels since 2012. Moreover, the acceleration of most rolling short names of late has been mostly a function of multiple expansion with little positive catalysts/development on the fundamental side. History suggests that heavily shorted names are likely to underperform in the weeks following +2 std outperformance.

HF de-gross: The squeeze in most shorted names is broad based, however the pain is most felt in areas where HF consensus long resides (Con. Disc., TMT & Healthcare). The desk believes the move over the past week was driven by investors closing out of popular shorts due to fears of retail speculative behavior rather a fundamentally positive view. GS PB book saw the largest 1-day de-risk activity since Aug ’19 (-3.5 std move vs avg flow) driven by a combination of long sales + short covers (H/T Vincent Lin).

Retail traders in the driver seat? Thanks to stimulus checks which are intended to help the economic recovery, many households have boosted their savings during the pandemic which potentially provided lots of dry powder to fuel this mania. Our analysis shows that our most rolling short basket is 60%+ more “popular” among retails than average S&P stocks based on our retail framework, evidenced in elevated proportion of flows in small trades (

Factor rotations at play. The desk noticed the pair has decoupled from stay-vs-go & momo pairs and started to track low vol & large cap (i.e., quality compounders) since Nov. An attribution analysis confirmed that high vol vs small size contributed to around 53% of the outperformance of most short vs VIP over two periods around Nov PFE data and Georgia run-off when the sell-off accelerated. Worth mentioning the outperformance of high vol vs low vol since early 2020 has eclipsed all of the consistent underperformance each year from 2014-2019, and the underperformance of small cap vs large cap has now largely normalized, which may mean that the factor moves will be less of a tailwind on the go-forward.

This morning’s market action is extending that chaos. As the short-squeeze accelerates…. 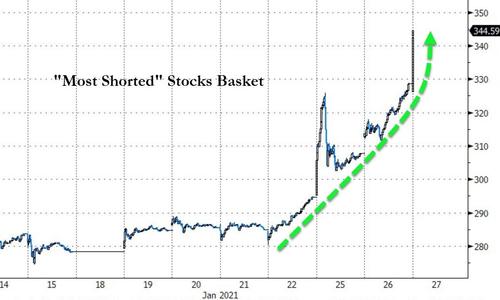 …Hedge funds are being forced to liquidate their longs… 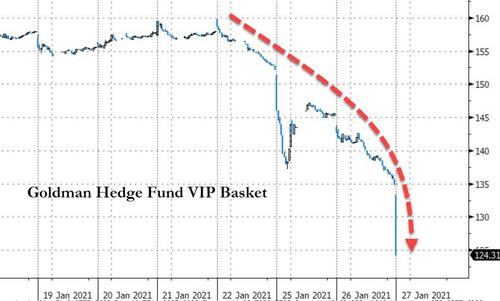 The Benefits of Red and Near-Infrared Light Therapy

The Election Fraud in Their Own Words