Here Are The Best And Worst Performing Assets In January

In spite of some wild markets over the past week, January overall saw a remarkably stable start to the year for most of the assets Deutsche Bank normally covers, with just 3 of the 43 assets in the bank’s sample seeing a move of more than 5% either way last month in local currency terms. That was the lowest number to see a move of that magnitude since November 2019.

However, as DB’s Henry Allen writes, “all has not been smooth in financial markets, with a number of companies such as GameStop seeing their share prices soar as a result of traders from the Reddit forum WallStreetBets.” GameStop has been the most prominent example, seeing a +1625% rise over the last month, though others such as Blackberry (+113%), AMC Entertainment Holdings (+525%) and Express (+559%) have all  surged higher. Meanwhile bitcoin recorded a 4th consecutive monthly gain as the cryptocurrency rose a further +19.5% in January.

Oil topped the leaderboard of Deutsche’s usual monthly list, with both Brent crude (+7.9%) and WTI (+7.6%) seeing large gains over the month and climbing to their highest levels since the pandemic began. Though there’s still risks to oil prices from further lockdowns denting global economic demand, they’ve been supported thanks to reductions in supply, with Saudi Arabia announcing at the start of the month that they’d unilaterally cut output by 1 million barrels per day in February and March. This strong performance for oil comes off the back of it being one of the worst performers in 2020, when both WTI and Brent crude were down by more than -20% over the year.

At the other end of the table were European equities, particularly in southern Europe, with the Greek Athex (-7.4%) seeing the worst monthly performance in total return terms, as Spain’s IBEX 35 (-3.6%) and Italy’s FTSE MIB (-2.6%) similarly lost ground. That said, other regions’ equity markets fared noticeable better, with indices in Asia such as the Hang Seng (+3.9%), the Nikkei (+0.8%) and the Shanghai Comp (+0.3%) all posting gains on the month. US tech companies also performed well as the NASDAQ advanced +1.4%.

Another asset class that suffered in January were sovereign bonds, which fell back across multiple countries, particularly as the results of the Georgia Senate runoff in the US gave the Democrats control of the Senate and opened up the prospect of significantly larger fiscal stimulus. Indeed, US Treasuries were down -1.1%, with 10yr yields rising to their highest levels since March 2020 following the election results. Other countries saw slides as well however, with gilts (-1.7%), bunds (- 0.5%) and BTPs (-0.7%) all moving lower.

Finally in FX, the Japanese Yen has been one of the worst performers among the DM currencies, seeing its largest monthly decline against the US dollar (-1.3%) in over a year. EM currencies have also continued to struggle into the new year, with the Brazilian Real (-4.9%), Argentine Peso (-3.4%), the Russian Ruble (-2.4%) and the South African Rand (-3.1%) all weakening against the US dollar.

Finally, and unfortunately, Deutsche Bank does not track the performance of Bitcoin, Ethereum and other cryptos. If it did they would be blowing out all other assets in YTD performance. 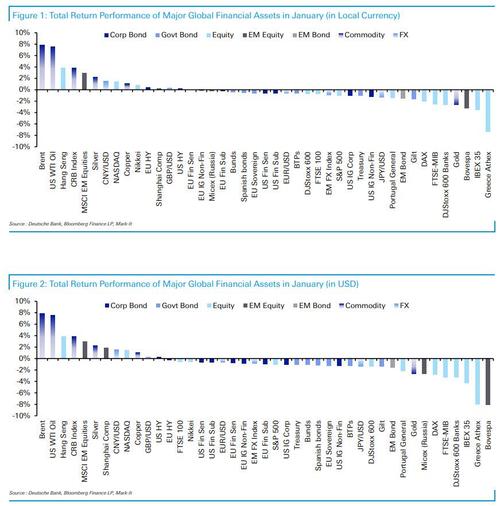