In its preview of the Fed’s statement today, Deutsche Bank notes that though positive news on the vaccine front has likely brightened the medium-term outlook for the Fed, near-term uncertainty on the trajectory of the virus and the fiscal outlook should result in a still-cautious tone to the FOMC meeting statement. In turn, the bank sees few material changes to the assessment of current economic conditions or the outlook for the expected path of the fed funds rate. With most policymakers reiterating since the November 5 meeting that the current level of accommodation remains “appropriate”, the Committee is expected to keep the pace and composition of asset purchases unchanged. However, the main innovation in the meeting statement, where there will be changes to the forward guidance language on the Fed’s asset purchase program, which the FOMC has been mulling for the last several months.

Specifically, DB thinks that the Fed will adopt language along the lines of increasing “its holdings of Treasury securities and agency mortgage-backed securities at least at the current pace…until substantial progress has been made toward the Committee’s goal of maximum employment, and inflation is on track to reach 2% on a sustained basis.”

Goldman agrees and writes that Fed officials are likely to see larger near-term risks but a brighter medium-term outlook as they head into their December meeting next week.  While the winter virus resurgence has grown much worse since the last meeting, the vaccine news should inspire more confidence in 2021 recovery prospects than when Fed officials last wrote down projections in September. This brighter outlook should translate to slightly rosier economic projections including a 2021 growth forecast of just over 4%, about half-way between consensus and Goldman’s own forecast. Goldman also expects a somewhat lower unemployment rate path, but no changes to the inflation projections beyond this year. 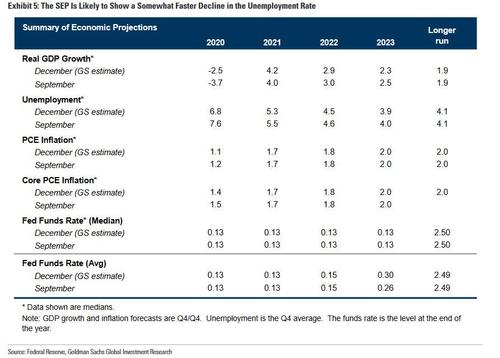 Markets have largely looked through the winter virus resurgence, focusing instead on the economy’s likely reacceleration next year as vaccines reduce virus spread. Goldman’s financial conditions index now stands at the easiest level in its history, as shown in the chart below, led by a further rally in the equity market. 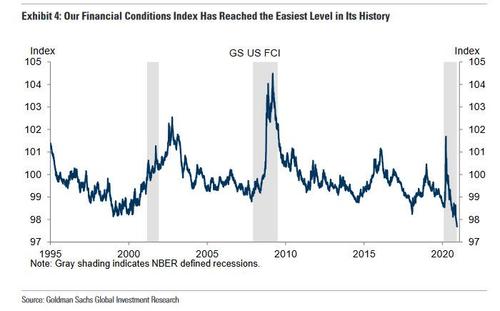 The encouraging vaccine news is likely to inspire a couple more FOMC participants to project a rate hike by 2023, raising the total from four to about six.However, most participants will probably need to see stronger evidence that the new liftoff thresholds might be met before penciling in a hike, and a strong majority is expected to show a flat funds rate through 2023. 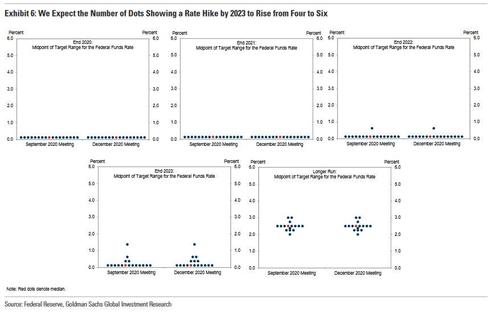 Goldman expects the FOMC to adopt outcome-based forward guidance indicating that purchases will continue “until the labor market is on track to reach maximum employment and inflation is on track to reach 2 percent,” a softer version of the thresholds used for liftoff of the funds rate.

What might that mean in practice?  The FOMC will want to maintain asset purchases as a core component of its policy response for much of the recovery period. To avoid having to tighten too rapidly later, the FOMC will aim to begin tapering asset purchases about 1-1½ years before liftoff so that it can taper at a gradual pace and leave a buffer between the end of asset purchases and the first rate hike. Here is how Goldman believes the Fed’s latest redline statement will look:

The guidance would probably be somewhat more dovish than consensus expectations, which anticipate an earlier tapering that begins further ahead of liftoff.  The November Primary Dealer Survey indicated that the median respondent expected tapering to begin in late 2021H2 or early 2022H1, as shown below, 2½-3 years before the median respondent expected liftoff.  Goldman does not think the FOMC will deliberately phase out asset purchases quite that far ahead of liftoff, though a longer gap is of if inflation surprises to the downside after tapering and delays liftoff. 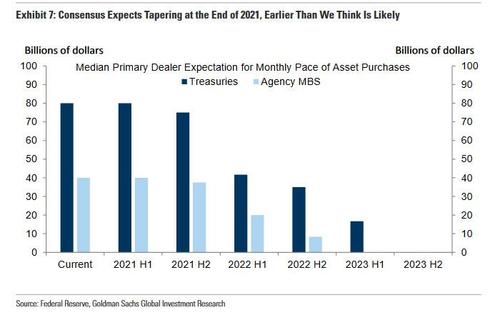 The Fed is also more likely than not to extend the weighted average maturity of its Treasury purchases, though it is a close call: Goldman says there are two key arguments for an extension.  First, as the purpose of asset purchases shifts to providing accommodation, it would be sensible to reduce purchases of shorter maturities in order to maximize their per-dollar impact.  Second, Fed officials might see the winter virus resurgence as the obvious moment to shoot their last bullet, or at least a moment not to disappoint market expectations.

That said, the bank’s economists do not see a clear signal from Fed officials, and view this as a close call.  First, financial conditions are already very easy and some Fed officials have expressed concern that a maturity extension would do more for markets than the economy.  Second, recent Fed commentary on the issue has been unclear and at times skeptical, and a recent article in the Wall Street Journal suggested that the FOMC is unlikely to change the composition of its purchases next week.  Third, the FOMC might value preserving the option to make a move similar to the Bank of Canada’s—reducing the pace of purchases but increasing the average maturity in an offsetting manner—but it seems unlikely to attempt it next week without having sufficiently presented the idea to financial markets in advance.  If a fiscal deal materializes before the FOMC meeting,it would further lower the odds of a maturity extension

‘Sold out to Satan’: Viganò unloads on coronavirus ‘pseudo-health regime’

The Coronavirus COVID-19 Pandemic: The Real Danger is “Agenda ID2020”

Most Popular Articles in December 2020