Here’s What The Fed Will Say Today

Unlike the quite exciting December FOMC meeting, consensus among economists is that the January FOMC meeting should be fairly quiet.

As Goldman writes in its FOMC preview, “while the pace of economic recovery has faltered in recent months due to virus resurgence, nearly all Fed officials have said that the medium-term outlook remains bright.” As such, the FOMC statement is likely to acknowledge the negative growth news and worsening public health situation but to stop short of suggesting any downgrade to the medium-term outlook. Also, with major changes announced just last month, it is unlikely for the Fed to announce any changes to the outlook or policy guidance paragraphs.

Of course, everyone will be focused on any mentions of tapering (or heaven forbid, rate hikes). Since introducing forward guidance for its asset purchase policy in December, FOMC members have provided a range of possibilities for when the Fed might start tapering asset purchases. A few of the regional Fed presidents mentioned the possibility of pulling back asset purchases later this year, but key members of the FOMC have pushed back on an early tapering. FWIW, Goldman’s “best guess” remains that the Fed begins tapering in 2022, though idiosyncratic developments in inflation could tip the balance earlier or later.

Looking at what has changed since the December FOMC, the key change is the worsening public health situation has dampened the economic recovery since the FOMC last met. The unemployment rate was unchanged at 6.7% in December (after falling by 0.6% on average in the prior 3 months), and core PCE and core CPI inflation both edged down. 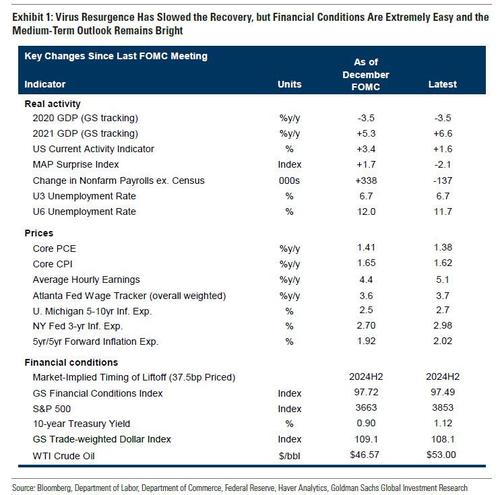 Activity in the sectors most impacted by the virus has deteriorated, with spending at restaurants falling by 4.5% in the December retail sales report and employment in the leisure & hospitality sector dropping by 498k in the December jobs report. Fed officials have recognized the slowdown in activity and attributed it to the virus resurgence, as shown in our January Fed Chatterbox. Financial conditions have eased further since the December meeting: Goldman’s FCI declined by 23bp and is at the easiest level in the history of the series.

The other major development since the last FOMC meeting is that expectations for further fiscal stimulus have increased dramatically. At the December meeting, it was not entirely clear whether any stimulus bill would be passed in December, and a package as large as the $950BN bill that was ultimately enacted was even less certain. Since Congress approved the $950bn bill in December, Democrats have gained an effective Senate majority and Goldman now expect an additional $1.1tn in fiscal stimulus, while JPM is even lower, at just $900BN – developments that the FOMC is unlikely to have anticipated in mid-December.

While it is most likely that the Fed will tilt neutral to a little dovish, one hawkish risk is a reference to the increase in market- and survey-based measures of inflation expectations since the December meeting. However, Goldman does not believe the moves are sufficiently large to warrant inclusion in our base case, particularly because the December statement did not offer any characterization of inflation expectations.

Another risk, of course, is that Powell will discuss the short-squeeze insanity in the market, a clear indicator of a bubble yet one which Powell simply can not acknowledge because if he does talk about a bubble, it would impact everything – not just the most shorted names. As such, we doubt Powell will say much about recent market action. It will be interesting to see if any of the reporters brings it up, but if they do we expect that they could face a lifetime ban from asking questions in the future.

One other change to the statement will be the update of the FOMC voters. Presidents Barkin, Bostic, Daly, and Evans are voters in 2021, replacing Presidents Harker, Kaplan, Kashkari, and Mester. In addition, Christopher Waller, formerly the head of research at the St. Louis Fed under President James Bullard, has joined the FOMC as a governor.

Turning to asset purchases, the FOMC introduced forward guidance for this policy tool at its December meeting. Since then, Fed officials have provided a range of possibilities for when the Fed might start tapering asset purchases. Fed Presidents Kaplan and Bostic mentioned the possibility of pulling back asset purchases later this year, but Vice Chair Clarida and Governor Brainard indicated that the current pace of purchases would be appropriate for “quite some time,” and other Fed commentary has generally pushed back on an early tapering.

Goldman thinks that it is much too early for any new reference to tapering in the statement because asset purchase guidance was issued just last month, and we and most market participants do not expect tapering to begin for at least several quarters; the bank’s best guess is that its end-2021 unemployment forecast of 4.5% would meet the “substantial further progress” bar for tapering that the Fed’s forward guidance has set.

With all that said, here is what Goldman believes the FOMC redline statement will look like. 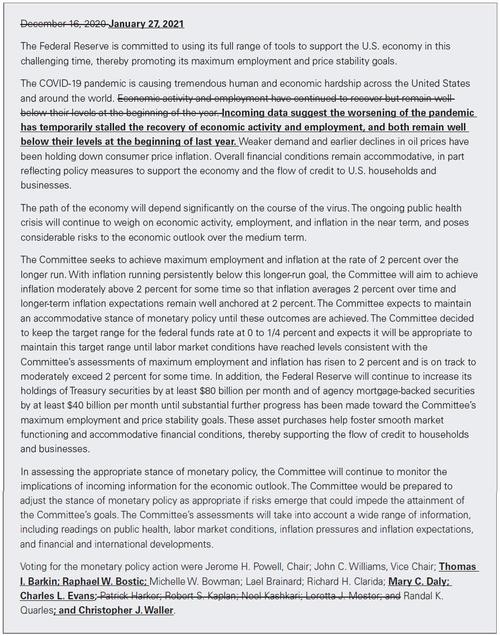