Here’s What The Fed’s QE Tapering Will Look Like, According To Goldman 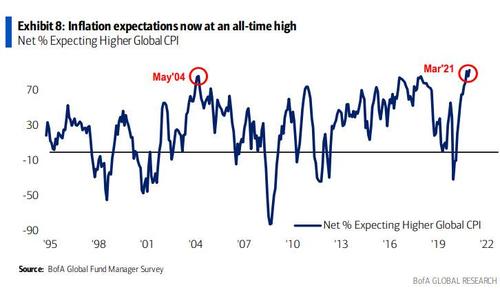 … the mood on Wall Street as revealed by the latest BofA Fund Managers Survey has reversed dramatically, and March saw the biggest jump in short-term rate expectations in 2 years, up 16% to net 49%… 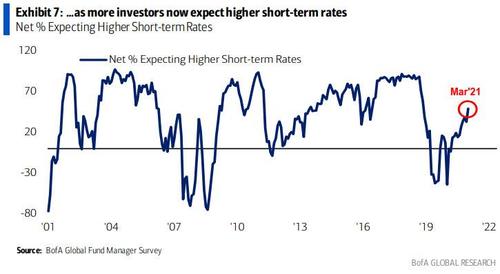 … even though, on average, 1st Fed rate hike not expected until February 23. 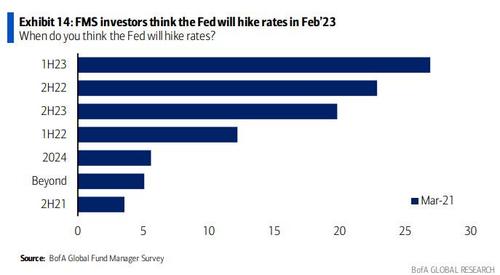 Incidentally, this is not too far off from the market’s own pricing which now implies almost three rate hikes by the end of 2023, a large hawkish shift since the FOMC last met in late January. While Goldman notes that this is much more hawkish than the bank’s forecast or its expectation of the FOMC’s view, it is not obviously at odds with any explicit calendar guidance that Fed officials have provided yet, and therefore does not necessarily require pushback from the Fed… yet (at least not until yields spike another 50% bps which they may do tomorrow should the Fed deliver a more hawkish than expected message). 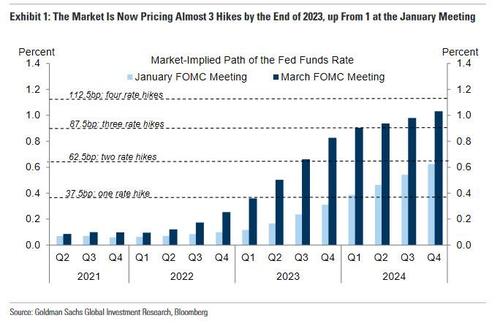 In addition, as Goldma notes, part of the discrepancy likely arises from comparing a mean with a mode, especially at a time when some investors are putting more weight on high inflation scenarios that lead to faster tightening. And while Fed officials do not seem to share investors’ perception of elevated inflation risk, they are likely to be comfortable with differences of opinion about something as uncertain as the inflation outlook 2-3 years ahead, especially since even though rates have risen sharply, financial conditions remain near record easy levels.

Here some would counter that we are getting ahead of ourselves: after all, before we get to the so-called liftoff phase, we first have to get through the infamous taper, i.e., the Fed’s announcement and implementation of a reduction in the monthly pace of TSY and MBS purchases, currently at $120BN/month. And as 2013’s Taper Tantrum showed, it is this initial hint at Fed QE tightening that could have the most dramatic adverse impact on risk assets.

Which brings us to the two-day FOMC meeting which just started in Washington and whose announcement tomorrow at 2pm will be closely scrutinized due to its widely expected impact on all asset classes.

As Goldman writes in its FOMC preview, investors expecting strong pushback on market pricing from Chair Powell – who already had a chance to do that two weeks ago during his WSJ video conference – “are likely to be disappointed”. If anything, Goldman notes that “the FOMC’s tolerance for any future tightening in financial conditions might be somewhat greater than usual at a time when activity is picking up and powerful growth impulses from reopening, fiscal stimulus, and pent-up savings are set to support the economy all year.” As the chart below shows, easy financial conditions are only a small part of the total growth impulse that is estimated in 2021. 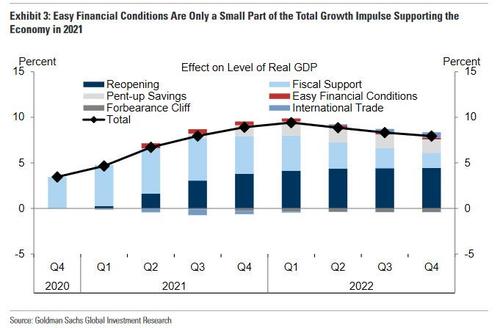 Goldman then notes that the simplest thing that Powell could do at tomorrow’s meeting to limit the risk that market pricing becomes  disconnected from the Fed’s plans in coming months “might be to simply reiterate and clarify the scattered hints that Fed officials have already provided about the timeline for tapering“, which as we noted above, is what markets are really concerned about.

Below Goldman lays out its understanding of the guidance on tapering is as follows:

Assuming that Powell does touch upon the upcoming taper, and eases market concerns about the timing of liftoff, there remains one key question for the March meeting: how FOMC participants will revise their forecasts for the economy and the funds rate in the years ahead, and what this reveals about their reaction functions.

The data have not changed dramatically since the last FOMC meeting, as shown in the chart below.  Most encouragingly, the first hints of the coming jobs boom appeared in the large rebound in employment in the virus-depressed leisure and hospitality sector in February. Beyond that, activity has accelerated somewhat, the unemployment rate has come down, and the inflation numbers have been mixed. One new addition to the table below is Goldman’s version of the Fed’s new Index of Common Inflation Expectations (CIE), which has risen in recent months and now stands above its pre-pandemic level. 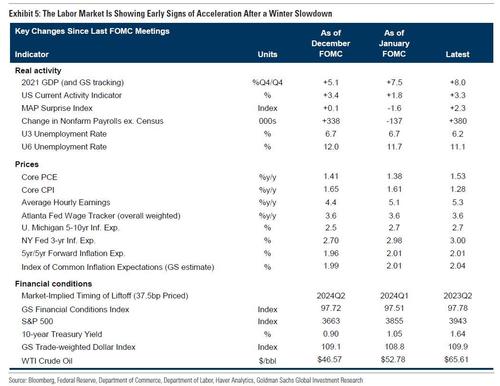 Since the FOMC last wrote down projections in December 2020 – and recall tomorrow’s FOMC will include the Fed’s first projections for 2021 – the biggest surprise has been that Democrats won the Senate, passed the $1.9tn American Rescue Plan Act, and are now likely to pass further fiscal measures including infrastructure spending, an extension of the child tax credit, and an extension of expanded unemployment insurance eligibility and benefit duration through 2022.

To understand how FOMC participants might revise their forecasts, Goldman used the Fed’s macro model, FRB/US, to simulate the effect of adding additional fiscal support to the FOMC’s prior outlook from December. The results indicated that the FOMC’s GDP growth and unemployment rate forecasts require major upgrades, and Goldman expects that analysis provided by the Fed staff will convince participants to make them. Even so, participants are likely to remain a bit cautious at this stage of the recovery. 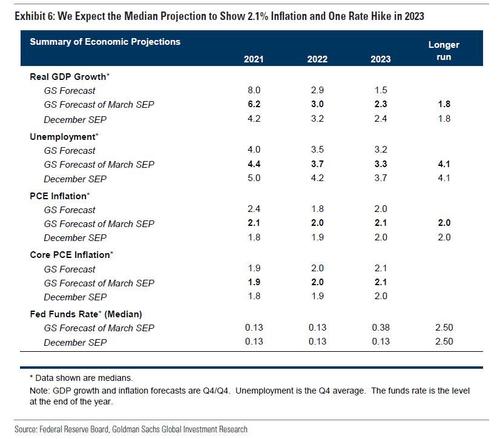 Putting this all together, the chart below shows Goldman’s projections for the Fed’s latest set of dots. Goldman’s Hatzius expect 11 participants to show at least one hike in 2023 versus 7 showing no hikes (Christopher Waller has joined the Board of Governors, raising the number of submissions to 18). Of those showing at least one hike, most will show just one, but a handful will show two or more, in line with market expectations of 3 rate hikes.

Additionally, the longer-run or neutral rate dots have come into focus in recent market discussion as some investors have begun to wonder whether a persistently more expansionary fiscal stance could push them higher. This thought makes some sense, but the longer-run dots have been extremely stable recently and the longer-run fiscal picture remains uncertain, so it is premature to expect changes next week. 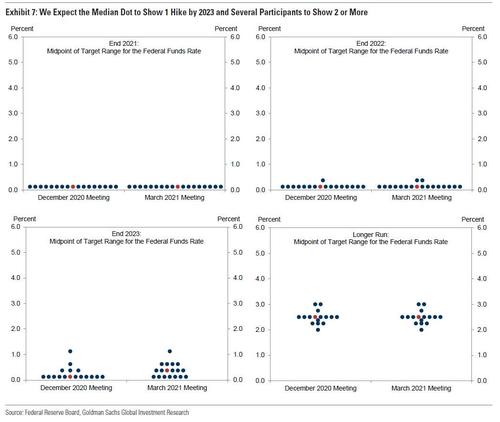 But the FOMC now releases the full distributions of economic and interest rate forecasts immediately in the SEP, and these might provide more information than the medians alone. In particular, comparing the number of participants showing hikes to the number projecting inflation at or above 2.1% should be informative about the liftoff thresholds that participants have in mind. For example, at the December meeting, six participants forecasted core PCE inflation of at least 2.1% in 2023, and five showed at least one rate hike. Admittedly, this approach is imperfect too, in part because the distributional charts in the SEP group together inflation forecasts of 2.1% and 2.2%. And as a final caveat, the FOMC will have many new participants who might have different views by the time these decisions are on the table.

Goldman’s own expectation is that the median will show 2.1% inflation and one hike would probably constitute a mild hawkish surprise to some investors, either because they do not expect the FOMC to show a hike or because they expect a hike but alongside 2.2% core inflation. If Fed officials wanted to send a dovish message, showing either no hikes at all alongside a core PCE forecast of 2.1% or one hike alongside a core PCE forecast of 2.2% or higher would be the most effective way to do it, assuming this is the reaction function they wish to convey.

Bitcoin, The Chinese, & The Dollar