Hiring Crashed In December Despite Jump In Job Openings

While we already knew that the US labor market closed 2020 with a puke and started 2021 with a whimper after Friday’s January jobs report missed big for a second month, moments ago the BLS reported that in December the labor market was unexpectedly solid in terms of new hiring and job openings – a now meaningless indicator considering all the much more recent data – with job openings in the US unexpectedly jumping by 74K to 6.646MM from an upward revised 6.572MM, well above the 6.4 MM consensus estimate (which in turn was predicted by the December payroll decline). Of course, as everyone knows this is a stale number – JOLTS is 2-months delayed – and as such we can only imagine the December print when it is unveiled in February will be far uglier. 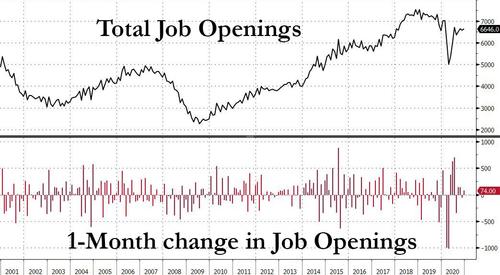 Delayed as it may be, the data showed that according to the BLS, job openings increased in professional and business services (+296,000). Job openings decreased in state and local government, excluding education (-65,000); arts, entertainment, and recreation (-50,000); and nondurable goods manufacturing (-30,000), while geographically, the number of job openings was little changed in all four regions. 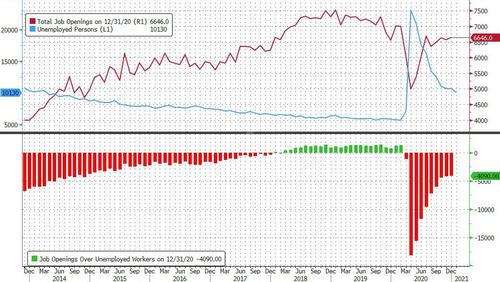 As a result, there was continued improvement in the job availability series, and in December there were just under 1.6 unemployed workers for every job opening, down from 4.6 at the peak crisis moment in April. 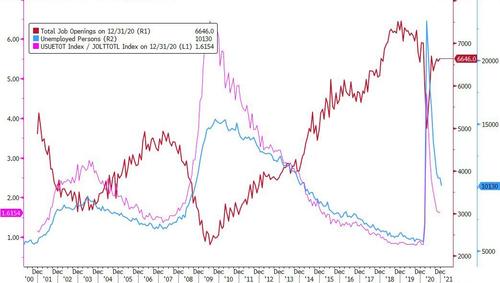 Meanwhile, after a positive month for hiring in November, when 5.935MM people were hired, in December the pace of hiring crashed, plunging to just 5.539MM, a drop of 396K for the month after a 23K increase in November. The coincides and validates the 227K drop in payrolls on December, the first contraction since April. 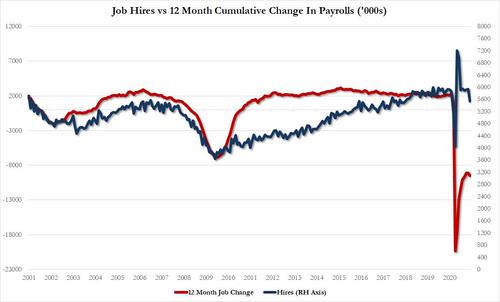 Hires decreased in accommodation and food services (-221,000); transportation, warehousing, and utilities (-133,000); and arts, entertainment, and recreation (-82,000). Hires increased in retail trade (+94,000). The number of hires in December (not seasonally adjusted) edged down over the year (-237,000). Hires decreased in accommodation and food services; arts, entertainment, and recreation; and educational services. Hires increased in a number of industries with the largest increases in wholesale trade, nondurable goods manufacturing, and durable goods manufacturing. The number of hires decreased in the West region. 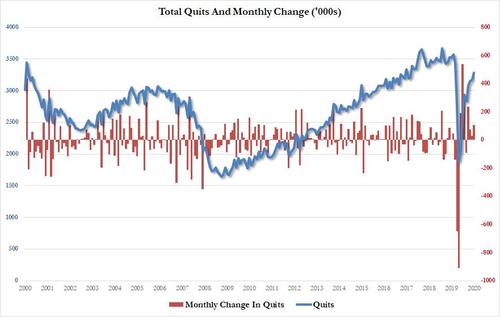 UPDATE: The Friday Night Oval Office Meeting Was EVEN MORE EXPLOSIVE Than We Thought – GENERAL FLYNN Saved the Day!