Something crazy happened in the repo market today: according to Curvature repo guru Scott Skyrm, the 10Y traded as low as -4.00% in repo, a record low level and an unprecedented dislocation for the world’s most liquid security, one with potentially tremendous consequences for what Jerome Powell may say tomorrow. Incidentally, Skyrm was far more dramatic about this historic move:

It’s all over for the 10 Year Note! Clearly a significant amount of shorts rolled forward and now short-demand has overwhelmed the available supply. The issue traded as low as -4.00% today and already traded at -3.05% for tomorrow. Both of those rates are lower than Fail Charge, which is the equivalent of -3.00%.

What is remarkable is that the 10Y was barely “special” last Thursday when yields exploded higher amid the liquidation panic. 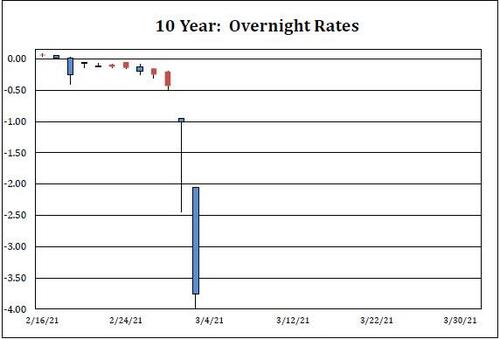 Actually scratch that: last week there were barely any shorts in the 10Y – that’s why the massive stop loss liquidation after last Thursday’s 7Y auction was just longs puking. It was only after that the flood of shorts arrived and hammered the 10Y to “fails” levels in repo.

What does that mean in English?

As we have discussed in the past, TSYs trade special, or anywhere between 0% and -3% in repo (and while they may trade at, they never drop below the fails charge), whenever there is a massive pile up of shorts. Think of it as a borrow on a stock at some insane percentage: 100%, 1000%, etc. It’s similar in rates, only such mechanics take places in the repo market and a rate of -3% is usually considered the equivalent of extremely hard to borrow. Even so, never before have we encountered a 10Y trading so special it was below the fails charge.

Why would anyone buy below the Fail Charge? As Skyrm explains, in the Treasury market, if you fail to deliver to a counterparty, there’s a fail charge equal to 300 basis points below the lower bound of the fed funds target range. The equivalent of a -3.00% Repo rate. There are a variety of reasons why a Repo desk will cover a short below the Fail Charge rate – which include: keeping clients happy, avoiding internal meetings/explanations, and internal rules that require shorts to be covered. None of this explains why the repo rate would drop to the mathematically improbable -4%, except to suggest that something is starting to crack in the repo market itself.

Skyrm concludes by saying what what we noted above, namely that “what’s important is that trading below the Fail Charge implies a real deep short-base.”

So what does this mean in the bit scheme of things? Recall what we showed yesterday using the latest data from Goldman – there is zero, nada, zilch liquidity in Treasurys. Indeed the last time the top-of-book depth was this low was during the peak of the Covid crisis last March. 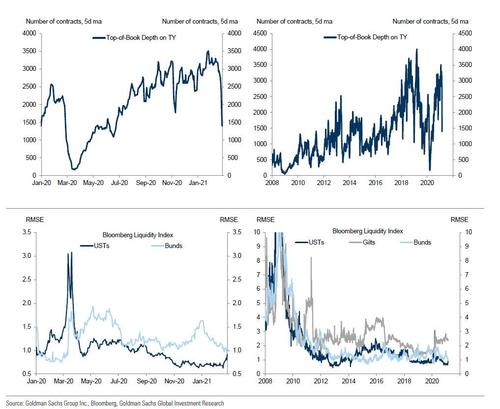 At the same time, the latest repo data merely confirms that all the price action is entirely on the short side and explains much of today’s action. In fact, never before has there been such a massive pile up of shorts in the 10Y.

This is important because it means that the imbalance in the bond market is no longer just a fundamental bet by traders expecting inflation: there is also something profoundly wrong with the actual market structure itself so much so that if left unchecked it could lead to catastrophic consequences for the world’s (once upon a time) most liquidity market.

Meanwhile, none other than the Fed vice chair Lael Brainard, who was until very recently expected to become the next Treasury secretary and is widely considered to be Powell’s replacement as Fed Chair, said on Tuesday that the Fed is now “paying attention”:

I am paying close attention to market developments — some of those moves last week and the speed of those moves caught my eye. I would be concerned if I saw disorderly conditions or persistent tightening in financial conditions that could slow progress toward our goal.

Maybe on Tuesday the Fed did not see “disorderly conditions” but in light of the historic move in repo on Wednesday, the Fed no longer has the luxury of waiting.

What this also means is that tomorrow, when Powell speaks at the Wall Street Journal virtual event which begins at noon, the Fed Chair will likely strongly hint that the Fed will either extend the SLR exemption by another 3-6 months (we explained the critical significance of the SLR term extension earlier in “Why The SLR Is All That Matters For Markets Right Now“), or that the IOER or RRP rates will be hiked to unclog the sudden build up of collateral and push it back in the market. Perhaps the Fed will go so far as suggesting a new Operation Twist will be activated in the coming months (ahead of the Fed’s taper announcement). Incidentally, our base case is that Powell will make it clear the current SLR term, will be extended as the Fed will want to hold on to YCC until just before it announces tapering in H2.

Whatever Powell does, he will have to do something to unfreeze not just the bond but now also the repo market, as the alternative is a market this is now literally broken, something former NY Fed repo guru Zoltan Pozsar predicted last week (see “Here We Go Again: Zoltan Warns Repo Market On Verge Of Major Shock As Key Funding Rate Turns Negative“).

And speaking of Pozsar, this is what he said in his latest Global Money Dispatch note which we touched on earlier:

For every macro narrative that explains why U.S. treasury yields are rising, there is also a plumbing narrative that can explain things with equal persuasion.

So yes, Powell and the Fed could ignore the rise in yields as long as the turmoil did not spread to the repo market – such a move could be explained by the reflationary macro narrative – but now that the 10Y is trading below the fails charge in repo the repo market is officially cracking and as Sept 2019 taught us, there is nothing that the Fed is more worried about than the sanctity of the repo market.

Finally, what happens if we are right and Powell does assure the market that SLR will be extended? Well, since all of the pent up uncertainty about whether or not bank balance sheets will be usable after March 31 will disappear, what will happen is a monster short squeeze as all those shorts that pushed the 10Y to -4% in repo panic and scramble to cover, sparking a massive surge higher in prices (and plunge in yields), and since there will be immediate follow through to stocks where concerns about rising yields just sent risk assets plunging, we expect a monster move higher in stocks tomorrow.

In fact, judging by the freefall in futures, we wouldn’t be surprise if the Fed announces that the SLR exemption will be granted at the usual pre-market time of 830am.

In any case, stay tuned because there will be fireworks – most likely to the upside – but if for some reason Powell refuses to unclog the repo market, there will be blood.

Is A Larger Correction Coming?