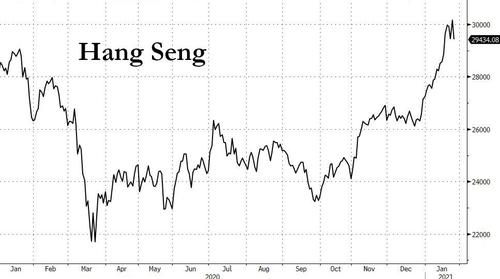 Defying fears that China’s take over of Hong Kong would lead to a crash in local stocks, the Hang Seng has soared and as the Nikkei reports, signs suggest Chinese hunger for Hong Kong stocks will continue for the time being, with investors buying new-economy shares, such as Tencent Holdings, and stocks in other companies including China Mobile and Xiaomi, especially since their ability to list in the US remains in limbo for the foreseeable future.

While these shares were dumped earlier this month after the U.S. imposed an investment ban on companies identified as having links to the country’s military, mainland investors have shifted out of China-listed A-shares to buy the cheaper Hong Kong-listed H-shares of mainland companies traded in the territory.

Hong Kong’s benchmark index, which fell 3.4% last year and trailed far behind international and mainland Chinese indexes, is on course for its best January since 1989, when it climbed 14.3% according to the Nikkei. The Hang Seng’s gains so far, at 10.8%, are nearly quadruple those of the S&P 500 index. The Hang Seng closed on Monday at 30,159.01, although it dipped back below 30,000 on Tuesday after China’s unexpectedly withdrew funds from the financial system amid warnings about growth froth.

The Chinese backstop is providing some assistance to the world’s cheapest major index that fell out favor as the coronavirus pandemic and a national security law imposed by Beijing in June following months of anti-government protests raised doubts over Hong Kong’s future as a global financial center. 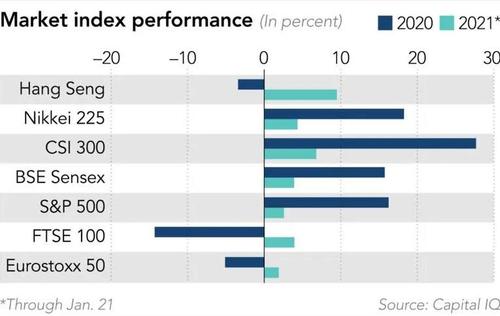 And now that momentum is back, so are the inflows into Hong Kong from China through the Stock Connect program, which allows mainland investors to buy shares on the city’s exchange. This number has already raced to a record $30.3 billion this month or about four times the 2020 monthly average. The buying this month also is a third of the entire net purchases of $87 billion made last year, according to Nikkei calculations.

Yet just like in the US, where major banks are warning that a day of reckoning for market euphoria is near, analysts have cautioned that the pace of mainland buying will have to slow even though some of it is driven by the arbitrage opportunity the Hong Kong-listed shares offer and investors’ belief that the economic resurgence in the mainland will drive corporate earnings.

Frank Benzimra, head of Asia equity strategy at Societe Generale in Hong Kong, said that since the inception of Stock Connect more than six years ago, there consistently has been southbound inflows, “with current volumes driven by investor hunger for new-economy stocks that have mushroomed in Hong Kong and money chasing beaten down stocks that face a U.S. investment ban.”

He said that while he believes “inflows will continue as the Hong Kong market transforms into the Nasdaq of the East, the volumes won’t be as high as it is currently now.”

Last Wednesday, the state-run China Securities Journal warned investors to be wary of a correction in Hong Kong, where institutional investors dominate, if stock valuations “deviate from fundamentals.”

Stock Connect’s southbound turnover, which represents both the buying and selling of Hong Kong-listed shares through the exchanges in Shanghai and Shenzhen, has exceeded $8 billion a day, representing 14% of the Hong Kong Stock Exchange’s volumes. That compares with a daily average volume of 10% in the second half of 2020.

“We believe southbound [flows through Stock Connect] will play a greater role structurally in the Hong Kong market,” Morgan Stanley strategists wrote in a note last week. They cited three reasons for their:

Among the stocks that have been sharply bid up is Tencent, which is up a whopping 22.5% this month. Other favored targets include companies such as China Mobile, China Telecom and railway equipment maker CRRC Corp., all of which bore the brunt of the sell-off in the past two months after the U.S. banned Americans from trading in them.

The top 20 stocks by southbound daily inflow this year through Jan. 19 has on average accounted for 43% of turnover on the Hong Kong exchange, compared with 7% for the same period last year, according to analysts at Morgan Stanley. The figures are even higher for China Mobile and oil conglomerate CNOOC, accounting for 94% and 74%, respectively, of the volumes in Hong Kong, compared with 2% and 3% last year.

As the Nikkei adds, the inflow into Hong Kong started to accelerate in recent weeks as more than 200 billion yuan ($31 billion) of new mutual funds raised so far this year is deployed, with allocations to Hong Kong likely to rise to half that amount, Citigroup analyst Yafei Tian said.

“The higher interest in Hong Kong stocks could be due to a couple of reasons, including laggard performance versus A-shares, inauguration of [the] Biden administration easing concerns over U.S.-China tensions and attractive new economy exposures,” she said.

Said buying helped Hong Kong-listed shares claw back steep discounts to their yuan-denominated versions trading in Shanghai or Shenzhen. Last October, the premium that yuan-denominated shares had over their Hong Kong counterparts surged to its highest level since 2009. The Hang Seng Stock Connect China AH Premium Index, which measures the absolute price premium A-shares have over H-shares for the largest and most liquid mainland companies, soared to 149.37 points on Oct. 15. It has since come off that recent high and closed on Friday at 134.84.

“A true value investor should now: Sell A-shares and buy H-shares,” Li Bei, the managing director of Shanghai Banxia Investment Management, wrote on the company’s official WeChat account. In 2020, “almost all asset classes in the world have achieved growth except for Hong Kong stocks,” she said. “H-shares have not felt the easing of overseas liquidity and the strong recovery of China’s economy.” She said the “undervaluation” of Hong Kong stocks is bigger among sanctioned companies, such as China Mobile, China Unicom, China Telecom and CNOOC. 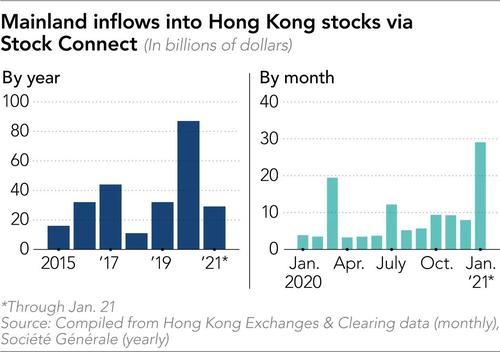 The infatuation that Chinese investors have with Hong Kong is not new: they have been the biggest supporters of Hong Kong stocks during the past year amid questions over the city’s future as a global financial center and as Western investors have pulled back. Beijing’s moves to erode the autonomy enjoyed by the city have hurt confidence, while months of social unrest and the pandemic have sent Hong Kong’s economy into a deep recession.

Yet as global investors balked at investing in Hong Kong, money from the mainland has been flowing in. Almost $80 billion has flooded into the city through Stock Connect since the national security law came into effect on June 30. That compares with $170 billion that came in from China since the start of 2015 to June 2020.

However, analysts caution that such exuberance has faded in the past. Mainland investors poured nearly $20 billion into Hong Kong in March last year after pandemic-induced selling sent markets into bear market territory, which is marked by a 20% fall from a recent peak.

As Hong Kong shares lagged, investors turned their attention elsewhere, with inflows averaging just $3.5 billion over the next three months. Analysts warned that, while Chinese investors may continue buying, sustaining such momentum will be difficult. Still, analysts largely expect the Hong Kong’s benchmark index, where mainland companies hold a 60% weighting, to catch up with the economic recovery in China.

“Broadly speaking, we are optimistic on the outlook for H-shares, given continued inflows from China and the positive trajectory for China economic growth,” said Tai Hui, chief Asia market strategist at J.P. Morgan Asset Management in Hong Kong. “That points to a long-term earnings growth potential for many companies in H-shares, so we do see potential for further upside.”

Prior to GameStop: Hedge fund billionaires top donor lists for Ds and Rs