The Consumer Price Index (CPI); a bogus measure of inflation

According to economist John Williams (ShadowStats.com) the Consumer Price Index (CPI), the government’s measure of the cost to maintain a constant standard of living, is no longer measured by the CPI.  Nor does the CPI measure for out-of-pocket expenditures (auto/home repair, medical event), only recurring expenditures (food, utilities, gasoline).

Mal-adjusted inflation rates have been used to create the false illusion of recovery of the Gross Domestic Product (GDP) after the 2008 banking/lending crisis and have misled Americans into thinking they are staying ahead of inflation, says Williams.

The CPI is back-dated

BEWARE THE REVISIONISTS!  The Bureau of Labor Standards (BLS) that tabulates and issues the CPI has the gall to restate inflation history as if all of the recent changes had always been in place.

ShadowStats.com has employed methodologies in place in 1980 and 1990.  Recognize, without these substitutions by the BLS, Social Security checks would be more than double what they are today, states Williams!

If you want to know how government is taking money out of your back pocket without you knowing, this is it.  The Federal government “steals” more money through inflation than it does via tax increases.

Inflation: stealing money out of your back pocket 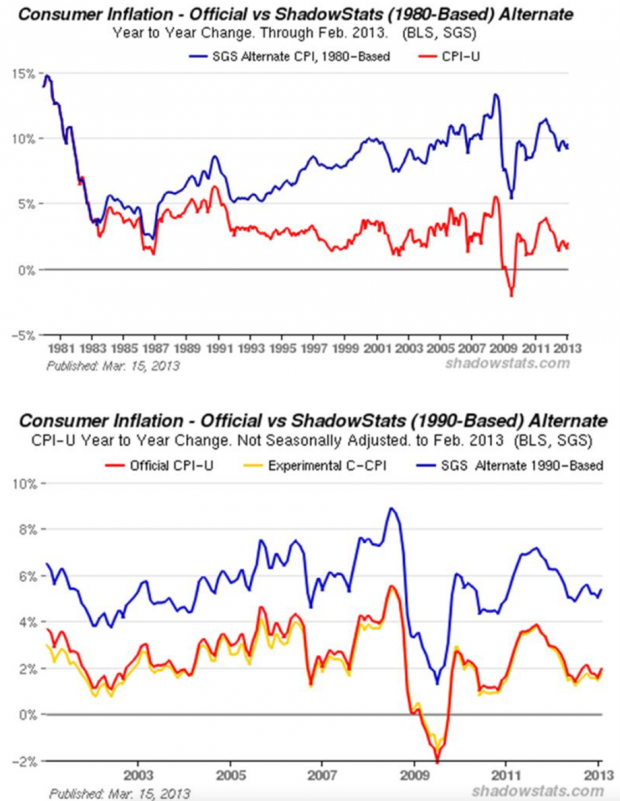 The US never recovered from the 2008 banking/lending crisis

Here below the Gross Domestic Product (the aggregate productivity of the US) is displayed the way the BLS shows it (top chart, red line) and the way it really should be presented (bottom chart, blue line).  The US has never recovered from the banking/lending collapse of 2008!  Your favorite President, whomever that might be, is assuredly using the top chart to take credit for a financial recovery that never happened. 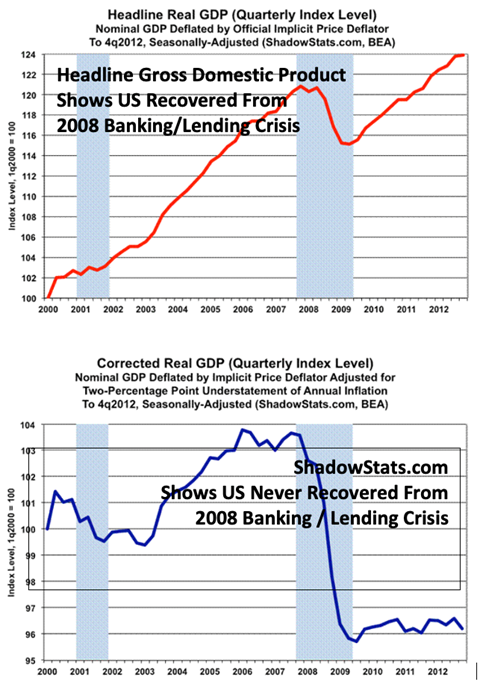 Woe to those who buy into the CPI (consumer price index)

Here is how John Williams says it:

“The Consumer Price Index (CPI) looks again like it has a strong chance of being used as a new federal parasite to drain consumer liquidity (ability to turn banked money into cash).  Like a vampire bat that sucks only enough blood for self-nourishment—leaving its victims alive for further abuse—the use of the CPI as a cost-of-living adjustment (COLA) measure is designed to suck real disposable income from the limited cash-flow of Social Security recipients, for the benefit of politicians who do not have the guts to vote against Social Security.”

Williams goes on to say sarcastically:

“Expanding the example that former Federal Reserve Chairman Alan Greenspan often used, where, as the price of steak rose, consumers would shift to hamburger, so too with higher hamburger costs have some cash-strapped retirees actually shifted consumption to dog food.”  (Report No. 515- Comment On Inflation Measurement And the Chained CPI, ShadowStats.com)

The post How Americans Were Cheated Out of a 200% Increase in Their Social Security Check appeared first on LewRockwell.