How Are Gold And Money Supply Related? 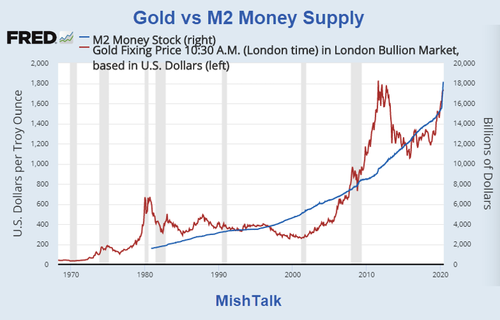 Let’s investigate an alleged relationship between gold and M2, a measure of money supply in the US.

There’s a clear correlation between the annual growth rate in M2 money supply and the price of the yellow metal.

The Tweet claims something different than my lead chart depicts. So let’s investigate the above idea in other time frames.

Note: This subject came up again today, this time in reference to M1. It’s an important topic because it is widely misunderstood.

This is a repost with an additional fresh chart on M1 at the end plus a discussion of how M1 is distorted by Sweeps.

Gold vs Rate of Change in M2 Money Supply 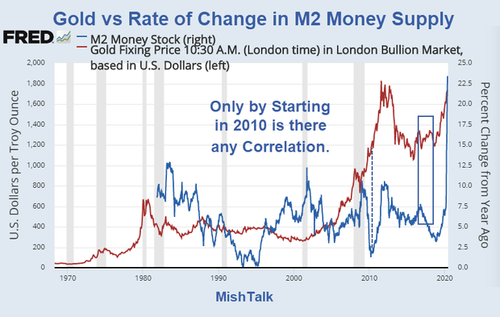 If we look at longer time frames, the rate of increase in M2 theory falls flat on its face.

One can force a correlation starting in 2010 but that is purposeful cherry-picking a timeframe. and even then, the time period in the box is counter-trend.

If you have to cherry-pick timeframes, especially when there are totally random results outside that timeframe, the relationship is imaginary.

Similarly, one can find times when gold is correlated to the dollar, the Yen, and most likely the popularity of peanuts at Cub games in some time frame.

Gold vs Faith in Central Banks

The best correlation I can find to the price of gold is faith in central banks. 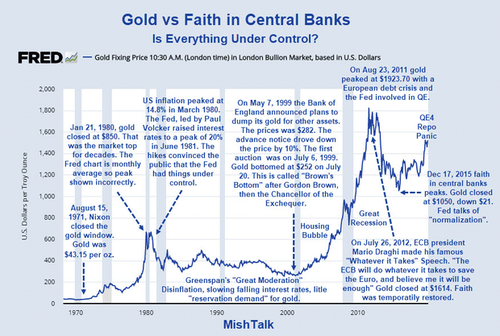 Gold collapsed from $850 to $250 under Greenspan’s “Great Moderation”. Greenspan was viewed as the “Maestro” until the dot-com bubble collapsed.

Gold went on a tear during the housing bubble, but put in a top when ECB president Mario Draghi gave his famous speech: “We will do whatever it takes to save the Euro, and believe me it will be enough.“

Draghi did nothing. His speech was enough. Bond yields on Greek, Portuguese, and Italian bonds started collapsing right after that speech. It was not until years later the ECB resorted to negative interest rates and QE.

Gold started rising again when the ECB went nuts with QE and the Fed started talking about “normalization” that anyone in their right mind knew was not coming.

Yes, the Fed has turned on QE to an extent few thought possible.

But that did not ignite inflation in any meaningful way, at least as measured by the CPI.

The Core CPI Declines 3 Months for the First Time Ever

On Jun 10, I noted The Core CPI Declines 3 Months for the First Time Ever.

My headline will have the inflationistas howling from the rooftops because they will not even bother reading what I said inside.

They do nothing of the kind. The indexes do not include home prices, only rent.

The purported medical inflation is a joke. Anyone who buys their own medical insurance will tell you their costs are up more than the reported 5.9%.

Anyone in college has not been pleased with the rising cost of tuition and rent in college towns.

And anyone with an ounce of common sense knows the current stock market bubble is a measure of inflation.

Lie of the Day, Month, and Year

The Fed and economists pretend that “inflation” is only up 0.1% year-over-year.

The Fed and economists in general do not know how to measure “inflation”.

And the Fed’s efforts to produce it has created destructive bubbles sure to pop causing the deflation they hope to prevent.

The BIS did a historical study and found routine price deflation was not any problem at all.

For a discussion of the BIS study, please see Historical Perspective on CPI Deflations

The Problem is Not Deflation, It’s Attempts to Prevent It

For discussion of asset bubbles and inflation, please see The Problem is Not Deflation, It’s Attempts to Prevent It.

The Fed is struggling to keep things under control. It is afraid of another credit bust like we had in 2008-2009, and rightfully so.

Are things under control? Clearly not.

Is money supply an indicator?

Perhaps, so, but the important point is not the QE, but rather that people know the Fed has again lost control.

Misconceptions about gold are rampant.

Here’s another example: Contrary to popular belief, jewelry purchases are meaningless to the price of gold.

I was recently asked about M1. Here is the chart of M1. 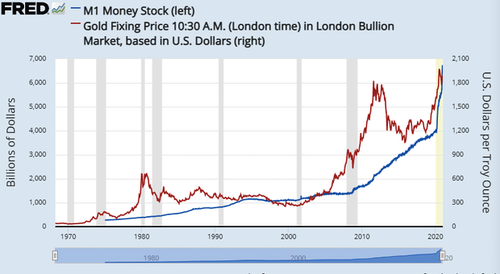 As you can see there is no correlation between M1 and the price of gold.

This is done nightly with no say by the bank customer.

I discussed this way back in 2007 in Where’s the Cash?

You Can Now Buy A Tiny Bulletproof Home For The Apocalypse