At a point where the individual investor is now empowered (read: can put themselves into a 7 figure margin call overnight by writing options on a brokerage app that literally had a “cheat code” for unlimited money), it looks as though the world of high fee money management could be coming to an unceremonious – and permanent – end.

We have already been noting over the past 18 months that hedge fund, brokerage and ETF fees have all been plunging. It looks as though that trend of demand for lower fees isn’t going to stop anytime soon.

More than half of all asset managers will be reducing charges next year, Bloomberg noted this week. It comes at a time when average fees in places like Europe have already hit record lows. The move comes as investors continue to rotate out of actively managed funds and into passive funds. The average fee in Europe has fallen about 33% since 2013 to 0.69%, the report notes. 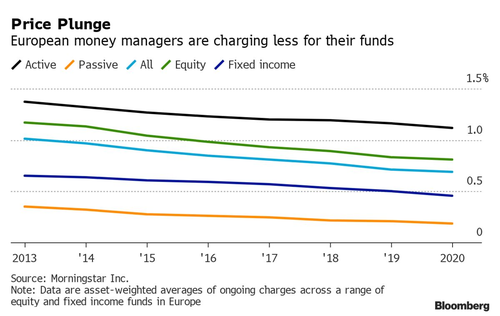 Shawn McNinch, managing director of investor services and head of U.S. sales at Brown Brothers Harriman, commented: “Managers need to reflect and take a hard look at themselves. The challenge for mid-sized managers is to really focus on where they’re different and where they can add value.”

The cheapest passive funds in Europe saw inflows of $12.3 billion this year through October, which compares to outflows of about $2.5 billion from active funds.

The competition is so stiff that even ETF heavyweights like Vanguard are feeling the pain. “Net flows to Vanguard’s funds have slowed in 2020 as rivals roll out similar products,” Bloomberg says, which has cause the company to put some of its global expansion plans on hold.

More than 33% of managers surveyed out of a group of 50 executives that manage $18 trillion said they would consider starting new passive funds or ETFs this year to help offset the money that is being pulled from active funds. McNinch noted: “People are looking at ETFs differently than they were five years ago. Now managers are really embracing ETFs as a structure itself, because they can create active products within those.”

Recall, we noted this summer that hedge fund fees had joined ETF fees and were in “free fall”. Hedge funds, suffering from poor performance and shrinking business prior to the pandemic – are also trying to lower fees to combat what is being called a potential “terminal decline”.

Our report this summer highlighted “specials” funds are offering to attract new business, including one fund in London that was foregoing performance fees until a high water mark is hit and another in Hong Kong is was offering “full-loss insurance” to cover all losses. Even well known manager Kyle Bass told his clients he would only charge 20% if he earns triple digit returns.

Paul Singer’s Elliot Management Corp. also lowered their fees in exchange for locking up investor capital for longer amounts of time. The company has a share class that will lower investor fees to 1.5% from 2%. Redemptions for this class are spread out over 18 months. The goal for hedge funds, as we noted months ago, is now less about growth and more about survival. 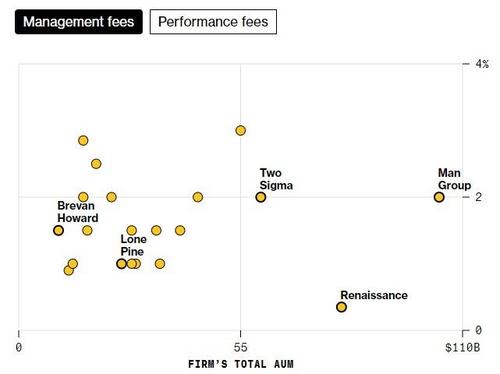 Earlier in the summer, we noted that the Robinhood-inspired shift to zero fees affected not just hedge funds – but the entire industry.

The shift was captured beautifully in a series of Tweets from Bloomberg’s Morgan Barna, CFA earlier this year.  She showed how trading volume spiked significantly in Q1 and Q2 of 2020, obviously attributable to the Covid lockdown and the introduction of new “traders” who have followed the herd, led by Barstool Sports’ Dave Portnoy, into the market. 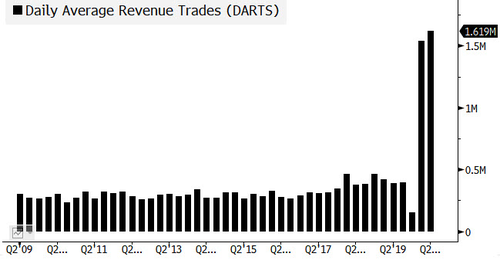 She also showed how Schwab has seen its revenue per trade collapse over the last 5 years, as the brokerage has tried to keep pace (or in some cases lead the charge) for lower commissions to help bring in new clients.

For all intents and purposes, commissions no longer seem to exist for stock trades and have been almost totally priced out of the industry. 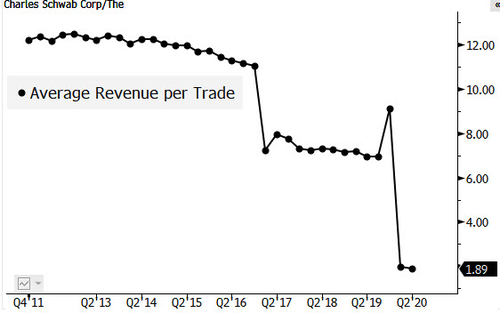 In March of last year we also documented  one of the first negative fee ETFs.