As previewed earlier when we said “December Payrolls Preview: Brace For A Very Ugly Number“, as a result of the second wave of covid shutdowns economists expected a sharp slowdown in December job growth in the U.S., with more than a quarter of those surveyed – including Goldman – predicting a negative print. Yet as Bloomberg notes, while the data is “almost certain to show an ongoing loss of labor-market momentum — indeed, it could reveal outright job losses — one could argue that it’s already outdated.” After all, a fresh stimulus package was passed towards the end of last month, and there is every chance of a further one in the months to come. Moreover, the prospect of vaccine-related normalization still hovers in the future, even if the current reality of the pandemic looks fairly grim. Finally, with this the last payroll month under the Trump admin, it is hardly a secret that the BLS would look to have a kitchen sink month where the upward “government massaged data” over the past 4 years catches down to reality.

With all that in mind, it was still a surprise just how ugly the December print was, with the BLS reporting that a whopping 140K jobs were lost last month, the first monthly job loss since April’s record drop… 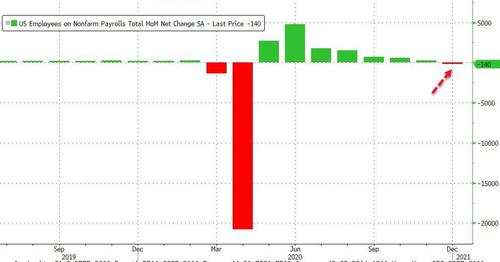 … on consensus expectations of a 50K print (although Goldman’s -50K forecast was close), resulting in a 190,000 miss to expectations. The -140K print was worse than all but three of 66 forecasts in the Bloomberg survey. 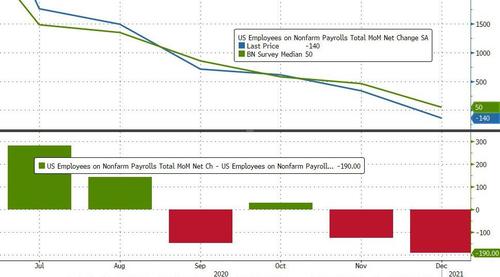 Employment declines were concentrated in leisure and hospitality, private education, and government were partially offset by gains in professional and business services, retail trade, construction, and transportation and warehousing. Also due to the harsh weather in December, workers unable to work due to bad weather was 111K.

It appears that the post-covid recovery is stalling about halfway on the way up to the pre-covid record highs. 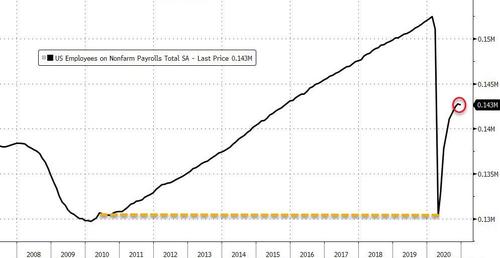 Notably, the job losses were almost entirely concentrated in leisure and hospitality. The sector saw employment decline by 498,000 last month. Three-quarters of the decrease came from food services and drinking places (-372,000). Employment also fell in the amusements, gambling, and recreation industry (-92,000) and in the accommodation industry (-24,000). Since February, employment in leisure and hospitality is down by 3.9 million, or 23.2 percent. 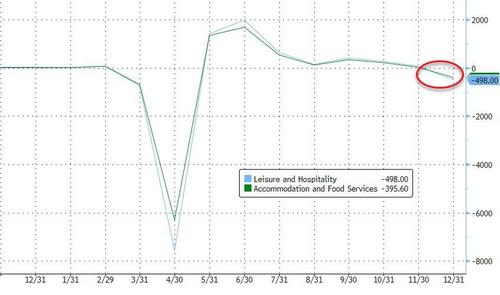 That said, while the Establishment survey was ugly, the Household survey showed a slightly better picture, with the number of employed actually rising by 21K from 149,809K to 149,830K while the number of unemployed was virtually unchanged at 10.7 million.

The unemployment rate was unchanged at 6.7%, on expectations of an increase to 6.8%. Of note: Hispanic Americans saw the biggest monthly increase in unemployment, the rate rising from 8.4% to 9.3%. At the same time, the participation for Black, Hispanic and Asian Americans also declined, while it rose slightly for White workers. 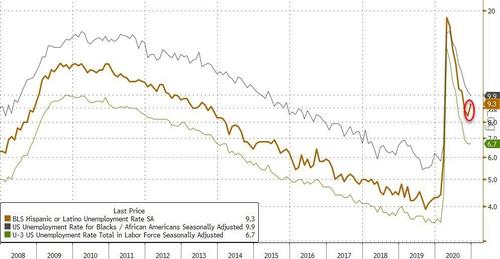 The labor force participation rate was unchanged at 61.5%. 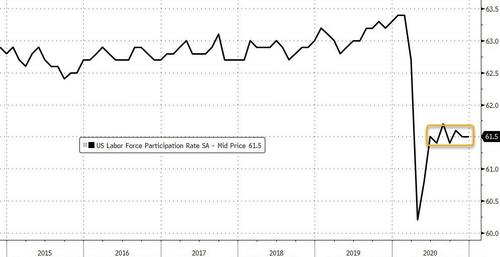 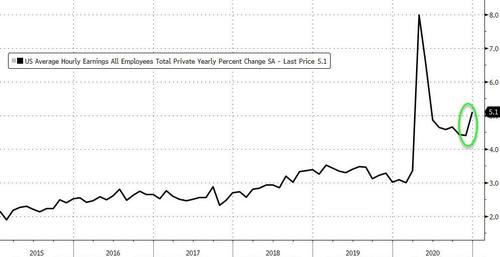 A closer look at which industries were affected most in December:

In retrospect, none of this will matter, because as noted up top, what matter is what happens next and how big the stimulus will be: as Bloomberg’s Jeffrey Rosenberg said, “We’re looking past the near-term weakness towards the policy response, and that means better growth, and higher rates” for Treasuries. “I don’t think this report is going to take us off that trend.”

And once again for the cheap seats, in case it is still unclear why this dismal number is ugly: as Bloomberg concludes, “for any economists who haven’t yet made a forecast for the size of the Covid-19 relief package that’s expected after the Biden administration takes office, this is likely to expand their estimate.” So… $3 trillion… or $5 trillion… or $10 trillion… and will Bitcoin be $1 million next?