Following some rumblings late last week in the FT, which noted that Jack Ma, the Chinese billionaire and Alibaba co-founder (and former Chairman) who recently had a disastrous falling out with the CCP, had apparently been fired from his own show, the western media apparently only just noticed on Sunday night that Ma hasn’t been seen publicly in 2 months.

The story immediately sparked speculation about Ma’s whereabouts – speculation that was exacerbated by the defeating silence from Beijing (the CCP essentially ignored the story while China’s subservient media and its army of censors went to work). 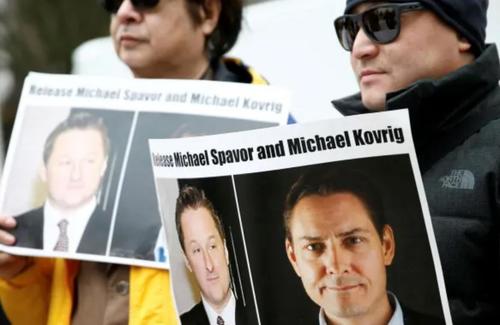 On Twitter, reporters likened the apparent kidnapping of Ma (presumably by CCP thugs, as many assumed he might already be living in a reeducation camp, or one of China’s many ‘secret prisons’) to the US federal government ordering the sudden arrest of Jeff Bezos or Mark Zuckerberg (on dubious charges).

But in the pages of the FT, the paper’s reporters pointed out that Ma’s disappearance isn’t really that revolutionary, and that Beijing has been using the CCP’s rule over the law to detain not just domestic dissidents, but foreigners as well. Beijing has ramped up these tactics over the last 2 years, since two Canadians – diplomat Michael Kovrig and businessman Michael Spavor – were arrested in late 2018 on national security related charges. Accused of spying, the men were confined to secret prisons, where they were subjected to torture, denied contact with family and Canadian diplomatic officials.

It’s widely believed the two men were detained in retaliation for Canada’s arrest of Huawei CFO Meng Wanzhou, the daughter of Huawei’s founder, Ren Zhengfei, himself a prominent businessman. However, while Meng has spent most of this time on house arrest, Spavor and Kovrig have been treated abominably.

As the world waits to learn the fate of the two Canadians, for the first time, the FT has published details about the program under which Spavor, Kovrig and tens of thousands of others have been detained across mainland China. The information was reportedly provided by Swedish human-rights group Safeguard Defenders.

Michael Kovrig, a former diplomat, and entrepreneur Michael Spavor are among almost 30,000 people who have been held in the facilities from 2013-19, according to Safeguard Defenders, a human rights group co-founded by Swedish citizen Peter Dahlin, who was himself held in a secret prison.

Activists and former diplomats are urging the international community to maintain an assertive approach to Beijing, arguing that quiet diplomacy has proven ineffective. The Canadians were detained in December 2018 following the arrest in Vancouver of Meng Wanzhou, chief financial officer of Huawei and daughter of the telecom group’s founder. Ms Meng was held after the US issued an extradition request over alleged violations of sanctions against Iran and has been living under house arrest since 2018.

Huawei has asserted that she is innocent of the charges. Mr Kovrig and Mr Spavor have spent six months in secret prisons under a programme started in 2013 known as “residential surveillance at a designated location” and were only allowed to meet consular officials once during that time.

While the program described by Safeguard Defenders reportedly began in 2013, China has a long history of detaining foreign nationals, sometimes for its own ends, and sometimes in retaliation. The nationalities of those detained include Brits and Aussies, among others.

“It’s been nearly 50 years since I was held, and 50 years later we’re having the same thing again,” said Anthony Grey, a British journalist who was held under house arrest for two years from 1967. Mr Grey was one of a dozen UK nationals detained following the arrest of a group of Chinese journalists in Hong Kong, who were alleged to have violated emergency regulations during violent protests and riots in the city, then under British rule.

Mr Grey was released after several of the Chinese journalists had served their jail sentences. China has also arrested citizens of Australia, with which it has had fraught relations in recent years. Most recently, Beijing detained Cheng Lei, a journalist who worked for Chinese state television, in August, after Australian intelligence staff raided the homes of Chinese journalists in the country. Individuals detained on national security suspicions are typically held under RSDL for up to six months.

Safeguard Defenders says about 400 people were taken into detention in 2013, the first year the programme was launched, increasing to more than 6,000 in 2019. It says detainees are abused psychologically and tortured, with tactics including keeping lights on in cells continuously and sleep deprivation.

Data provided by the group shows how China’s secret prison population has soared in recent years. 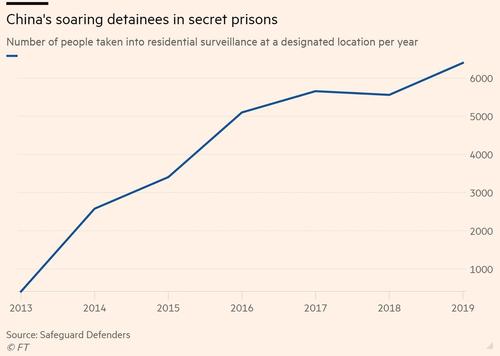 One issue with China’s secret prison system is that laws in China are essentially whatever the CCP says they are at any given time.

People can be held for months while authorities investigate them.

Chinese police can detain people for long periods without evidence outside of the RSDL system. In 2013, corporate investigators Peter Humphrey, a UK citizen, and his Chinese-born American wife Yu Yingzeng were held for almost two years, while police tried to force them to confess to a variety of crimes. They denied all allegations.

“We have a new rising power which is acting as a bully, and is building up an inventory of prisoners who become bargaining chips in its negotiations with countries on almost anything,” said Mr Humphrey. China’s supporters see its actions as commensurate with other countries’.

Ren Zhengfei, founder of Huawei, believes the charges against his daughter are politically motivated and has recommended the book The American Trap by Frédéric Pierucci, a French former executive at power group Alstom, about his jailing on extraterritorial corruption charges in the US when General Electric was trying to take over part of the French company. Mr Pierucci has alleged that Washington uses extraterritorial laws to attack countries competing with US strategic industries.

Another group interviewed by the FT highlighted the risks associated with Beijing’s increasingly aggressive stance toward detentions and leveraging them for political purposes.

Charlie Parton, a former British diplomat and now at RUSI, a security think-tank, spearheaded the #FreeChinaHostages campaign, urging people to send Christmas cards to the detainees to Chinese embassies worldwide. “One aim is to show the world the nature of the beast. Despite propounding ideas of win-win and shared humanity, the Chinese Communist party is an unpleasant organisation,” he said.

But with COVID-19 ravaging its economy, the EU is brushing all this aside, and embracing a new trade deal with China that many have warned will make the bloc subservient to Beijing.