The rumored deal between Hyundai and Apple that sent shares of automakers surging last week… doesn’t seem to actually exist.

The partnership that dominated headlines and CNBC “analysis” over the last two weeks apparently isn’t even happening, according to Reuters on Monday morning. Hyundai reportedly said it is not now in talks with Apple to work on self-driving cars and EVs. 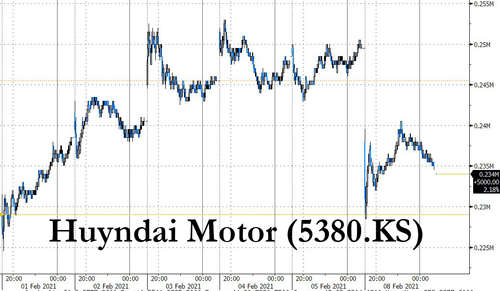 The news bring weeks of rumors regarding Apple’s potential EV partner to an end (for now). The potential partnership reportedly caused “internal divisions” at Hyundai, with some worrying about “become a contract manufacturer” for Apple, likening it to Apple’s relationship with Foxconn for the iPhone.

“We are not having talks with Apple on developing autonomous vehicles,” the automaker disclosed on Monday. “We are receiving requests for cooperation in joint development of autonomous electric vehicles from various companies, but they are at early stage and nothing has been decided.”

Even more interesting, regarding disclosures, is Bloomberg reporting Monday morning that “eleven executives at Hyundai Motor” sold stock before it disclosed it wasn’t holding talks with Apple.

Recall, it was just 3 days ago when news had broke that Kia was preparing to make Apple’s EV in Georgia. The legacy automaker, at the time, had reportedly “approached potential partners about a plan to assemble Apple Inc.’s long-awaited electric car in Georgia,” according to Dow Jones.

Rumor was that a partnership between the two companies could involve a “multibillion-dollar investment”, despite the fact that a deal had not yet been finalized, we noted.

Kia shares moved higher in trading last week as the news started to trickle out. 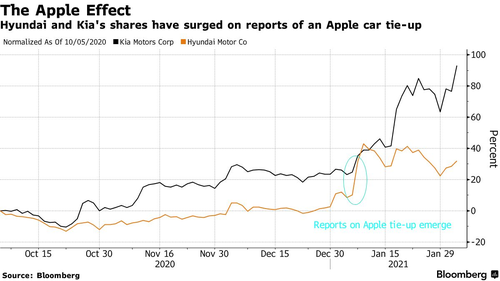 Apple reportedly had planned “to set up production with Kia and build Apple cars at the automaker’s facility in Georgia, U.S.,” the report noted. It was estimated that the company was going to sign a deal as quickly as February 17.

That deal now looks to be off the table. We will continue to follow this story and update it as information becomes available.