If “Fight Like Hell” Constitutes Incitement, Every Political Candidate In America Is Guilty: Sen. Cruz

Sen. Ted Cruz (R-Texas) on the third day of the impeachment trial criticized House managers for failing to show how former President Donald Trump “incited” the Jan. 6 breach of the U.S. Capitol. 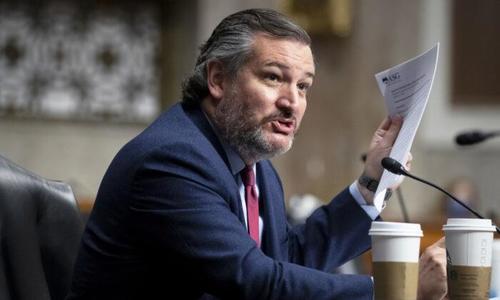 Cruz said that while the House managers’ presentation was “designed to be emotional and powerful,” it only makes the case that a “terrorist attack” occurred at the Capitol on Jan. 6. He said that the prosecution team presented “virtually no argument” on how Trump’s conduct meets the legal standard of incitement.

“The House managers focused a great deal on the president, using words like ‘fight or fight like hell.’ Well if that constitutes incitement, then every single political candidate in America is guilty of incitement,” Cruz told reporters, according to the Capitol pool.

“Because I guarantee you all 100 senators in that chamber have stood on the stump and said we need to ‘fight or fight like hell.’”

House Democrats have spent two days during the trial laying out evidence in an attempt to support their claim that Trump incited an insurrection on Jan. 6. Impeachment managers attempted to rely on multiple sliced up clips and audio of Jan. 6 as well as parts of Trump’s Jan. 6 speech and other remarks to make their case. However, their presentations failed to include new revelations or conclusive evidence to substantiate the allegations.

The House managers’ presentations have been praised for making powerful statements but also drew criticism from Democratic commentators who pointed out that their arguments were “getting too repetitive” and should have been shortened.

On Thursday, the House managers wrapped up their arguments and urged senators to convict the former president.

“We humbly, humbly, ask you to convict President Trump for the crime for which he is overwhelmingly guilty of. Because if you don’t, if we pretend this didn’t happen, or worse, if we let it go unanswered, who’s to say it won’t happen again?” House impeachment manager Rep. Joe Neguse (D-Colo.) said in his closing remarks.

“When President Trump stood up to that podium on January 6, he knew that many in that crowd were inflamed, were armed, were ready for violence. It was an explosive situation. And he knew it,” he added, without providing concrete evidence to demonstrate how Trump would have known.

David Schoen, Trump’s impeachment defense attorney, told reporters on Thursday that he did not think the Democrats were able to link Trump to the Jan. 6 incident and added that it was “offensive” to open up old wounds.

“I think they’re making a movie. You know, they haven’t in any way tied it to Donald Trump,” Schoen said.

“And I think it’s offensive. Quite frankly, it’s antithetical [to] the healing process to continue to show the tragedy that happened here that Donald Trump has condemned, and I think it tears at the American people, quite frankly.”

Schoen and Trump’s other attorney, Bruce Castor, on Friday are expected to present their concluding arguments to the Senate, who will then have to vote whether to convict the former president. To convict, two-thirds of the Senate or 67 votes are needed. Democrats are unlikely to obtain the requisite number of votes as 44 Republicans on Tuesday have indicated that they believe the trial is unconstitutional.

Speaking about strategies the lawyers could take, Cruz said that their job now is to make clear how the impeachment managers have not carried out their burden of proof, and have not demonstrated that Trump’s conduct satisfied the legal standard of “high crimes and misdemeanors” required for conviction under the U.S. Constitution.

“And any standard that is put forth and certainly any standard that House managers have tried to put forward on its face would equally condemn multiple comments from multiple Democrats, whether it is [House Speaker] Nancy Pelosi calling police officers storm troopers and Nazis, whether it is [Senate Majority Leader] Chuck Schumer threatening to ‘unleash the whirlwind’ on Supreme Court justices,” he said.

The Texas senator said he believes the trial could wrap up on Friday or Saturday.