With stocks at record highs (prices and valuations), and credit spreads at record tights (despite record leverage), most expect ‘more of the same’ from The Fed’s finally statement and press conference tomorrow in terms of promises to do more but not actually doing it… and applying more verbal pressure for fiscal support (heaven forbid they step in and bail out Washington’s utterly devastating gridlock on the COVID Relief Bill).

In fact, as WSJ’s Michael Derby reports, some suspect The Fed may even lift rates (just not the way most think).

Downward pressure in the Federal Reserve’s fed funds rate could drive the Fed to lift its interest on excess reserves rate at the end of its Federal Open Market Committee meeting. For a variety of reasons, financial markets are facing downward pressure on money market rates, and to ensure the fed funds rate trades in the middle of the 0% to 0.25% range, some see the Fed making technical adjustments.

Scott Skyrm of money market trading firm Curvature Securities says that instead of lifting the IOER rate as it has in the past, the Fed could instead lift the reverse repo rate. As with these sorts of changes that have taken place in the past, such a change would be purely technical and signal no change in monetary policy. 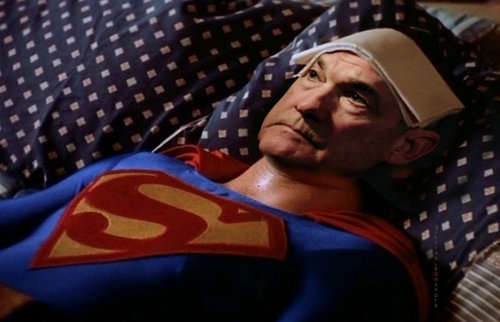 But, Standard Chartered’s Steve Englander and John Davies believe instead that, for Jay Powell and his merry men (and women), there is too much uncertainty not to act, and they will take an even more dovish stance.

We expect the FOMC to ease monetary policy on 16 December, most likely by increasing the duration of its Treasury portfolio. It may also increase asset purchases or otherwise signal its willingness to support the economy and asset markets, but these may be explicitly temporary or tied to economic outcomes. FOMC meeting minutes and Fed comments suggest that the FOMC could give some longer-term guidance on what would eventually lead to a slowing or ending of asset purchases.

Taken together, these steps may be enough to limit the backing up of bond yields on a fiscal deal in Congress and encourage yields lower, faster, absent a deal. Paradoxically, there may be more need for increased asset purchases in the event of a deal, because of the need to demonstrate a soft commitment to capping bond yields. The key question is whether the Fed is concerned simply about a run-up in yields rather than its underlying drivers. Yield spikes in March and June were primarily driven by the real yield component, but the recent steepening bias has been driven by the breakeven, reflecting recovery and reflation optimism (Figure 1). 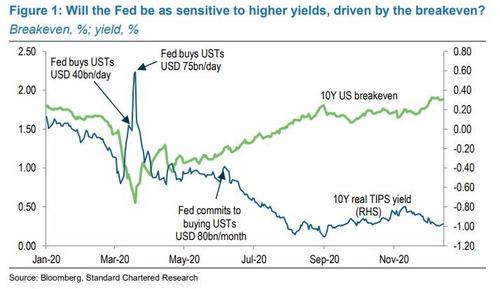 A Fed easing move associated with fiscal stimulus would be USD-negative, in our view, with the USD selling both on associated asset market optimism and a Fed move that could put further downward pressure on real rates. Easing in the absence of stimulus probably would not offset USD appreciation on pessimism. We think the USD would appreciate on fiscal stimulus unless the Fed limited bond yield increases. This would raise the risk of a taper tantrum at the long end of the yield curve.

The uncertainty on fiscal stimulus is well discussed. As of 14 December, it looks as if some progress towards an agreement is being made, but we have been in this position before. Congress is aware that special unemployment measures for those affected by COVID-19 will expire 26 December, so there could be some significant income stresses among those who have no savings or ability to borrow.

Policy makers and market participants have become somewhat inured to large spending numbers. If policy makers gave a USD 300 per week supplement for 20mn unemployed for 20 weeks, the cost would be about USD 120bn. An outright grant of USD 600 per person to the 250mn poorest US residents (roughly 75% of the US population, USD 2,400 for a family of four) would cost USD 150bn. These are big income support numbers, but much smaller than the packages under discussion. USD 900bn spent over four months is 14% of GDP over that period (not annualised).

Personal income has been higher since April than the pre-COVID-19 February high, with transfers more than making up for lost wage and salary income. Without stimulus, personal income would very likely fall below February 2020 levels in January 2021, but possibly in November or December 2020. The 5 November FOMC meeting minutes alluded to strong household savings as a factor that could mitigate the impact of a fiscal impasse. A duration increase or even added QE would do little to maintain aggregate demand if the fiscal talks failed, but could reduce the degree of financial-market tension. This is especially the case because the year-end, the end of exceptional unemployment benefits and the end of Section 13 (3) Fed programmes will essentially coincide. If a fiscal deal is passed, the duration move would limit the backing up of yields.

If not now, then when?

The intensification of COVID-19 is likely to last at least through the holiday season; lockdowns are increasing, and initial and continuing unemployment claims are rising. The next two or three months are likely to be the nadir in activity. For the Fed, we see it as pointless to move at the end-January 2021 meeting, because much of the damage will likely have already been done and the beneficial impact of the vaccine would be on the horizon. We earlier made the case that the Fed could move intra-meeting if economic conditions deteriorated (FOMC could move before 16 December), but the deterioration in labour-market conditions has only recently become visible. The logic of ‘if you are going to move, sooner is better than later’ still applies. The FOMC minutes and some recent speakers indicated that an increase in the average duration of the Fed portfolio is more acceptable than an increased pace of buying.

Does the Fed feel lucky today?

The Fed might be able to get away with doing nothing and sending the message that it is poised to move quickly if conditions deteriorate.

The question is whether it wants to take this chance. The Fed could reasonably indicate that it was acting preemptively to prevent bond yields and risk spreads from rising prematurely, and willing to take the risk that the added measures would turn out to be unnecessary in retrospect.

The FOMC compromise could be to act on the duration and possibly the size of asset purchases, but make the move temporary or set to unwind if economic conditions improved.

This would give the economy and financial markets the immediate benefit of added liquidity and avoid the question of how aggressively the Fed wants to informally cap rates until it is confident of self-sustaining recovery.

What message does the FOMC want to send on the balance sheet?

Investors have been debating and the Fed has been reticent to disclose how the Fed expects to use the balance sheet to hit economic targets. The FOMC minutes and some recent Fed speakers suggested that Fed policy makers were closer to agreement on the role of the balance sheet.

We and many in the market expect the FOMC to indicate that the balance sheet will stop increasing before policy rates are raised. We doubt that they will provide Taylorrule specificity for the use of asset purchases. Most likely the FOMC will indicate that the beginning of the pullback in the balance sheet will be driven by the judgment that the effective lower bound is no longer a binding restraint, so there is no need to act on the long end because there is no policy option at the short end.

UST impact of any duration extension may depend on fiscal progress

The latest survey evidence shows that the consensus expectation is not for the Fed to extend the duration of its UST purchases at this meeting. Only 23% of those polled in a recent Bloomberg survey expected such a decision. Even fewer expected the Fed to increase the pace of its QE purchases. Hence, if the Fed does take the duration extension option this week, this could be a UST-positive surprise, especially if it also provides reasonably dovish forward guidance around the outlook for its QE programme. Such a decision, in our view, would provide a clear signal that the Fed remains concerned about the risk of sustained curve steepening, near-term at least, given the deteriorating COVID backdrop.

Since April, we have held the view that the Fed’s UST buying activity in March suggested it was uncomfortable with the 10Y UST yield rising much above 1%. We felt this view was supported by the ultra-dovish language at the 10 June FOMC meeting following the sudden jump in yields at the start of that month. In both March and June, however, the real yield component played a key role in the rise in the nominal 10Y yield, which we argued would have sat very uneasily with the Fed from a theoretical standpoint. More recently, the breakeven component has been the driver of the rise in the nominal yield, reflecting vaccine-based reflation and recovery optimism (Figure 1).

A decision to extend duration at this point would therefore signal that the Fed remains wary of nominal long-end yields rising too far, too fast. While the immediate response by the UST curve to such a decision should be some modest bull flattening, it is rarely a case of ceteris paribus. The other main source of event risk for the UST market in the very near term is the lingering possibility that Congress will pass a fiscal support package. While any duration extension is supportive of long-end UST demand, a fiscal support package is likely to increase long-end UST supply via primary-market issuance and secondary-market reflation speculators. Hence, the arrival of a fiscal support package shortly after or before the December FOMC meeting would likely limit the scope for bull flattening. So far, speculation on the likelihood of fiscal stimulus has been the biggest driver of bond yields, in our view. To push rates well below current levels, a clear indication may be needed of how far the Fed will tolerate rates backing up, combined with a commitment to act on it.

A modest duration extension decision this week would probably not offset the impact of a fiscal support deal, especially if there were some conditionality or indication that the move was temporary. If the surprise were bigger and if overall QE were increased, investors could take away a sense of sufficiently significant Fed commitment that the Fed move would emerge as the main yield driver.

The key upside risk to UST yields this week would therefore be a fiscal support deal in Congress but an on-hold Fed. However, we would still be sceptical that the 10Y UST yield would move sharply above 1% as a result, given COVID-related economic challenges ahead and the possibility that a duration-extension has only been delayed until early next year. The same Bloomberg survey showed 43% of those polled expected such a policy move during Q1.

Conversely, the downside risk to yields is a duration extension decision but no fiscal package. We believe the curve steepening bias seen over recent months has been driven by a combination of fiscal support hopes and vaccine optimism. We think this explains why the 10Y UST term premium has decoupled from the pull of the expanding global stock of negative-yielding debt (Figure 2). 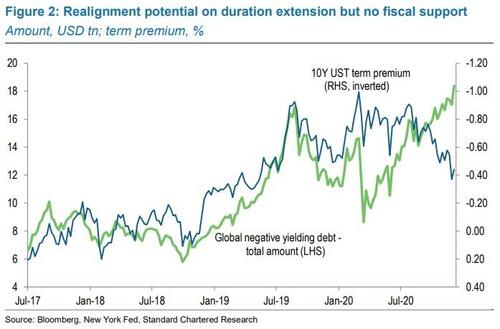 If fiscal support hopes were denied, at least for the near term, we would expect a swift pull-back in the term premium to realign more closely with the level of negative-yielding debt.

2020 Ends With Around 20 Million Americans Still On Jobless Benefits