If You Move To These Cities, The American Dream Is Still Achievable

Owning a piece of ‘The American Dream’ – if all that means to you is buying a house – has become out of reach for many (if not most Amercians) and the situation is getting worse.

The serial-bubble-blowing Federal Reserve is making the same mistake it made during the mid-2000s and late 1990s by allowing untethered monetary policy to inflate housing prices to unaffordable levels.

In many parts of the country, housing prices have outpaced household incomes.

A combination of factors during the pandemic resulted in surging home prices. First, the Fed slammed mortgage rates to record lows, and the socio-economic collapse of metro areas created an exodus to suburbia. The combination of the two has inflated overall US home prices.

Using data from job search site Zippia, this graphic below reveals the most and least affordable cities to purchase a home. 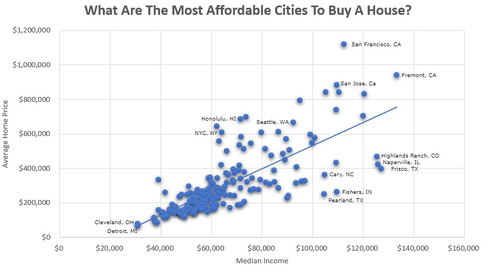 Head of content at Zippia, Kathy Morris, wrote that “the American dream of homeownership is still possible for the average worker.” She lists the top ten most affordable areas to live in:

To develop the list, Morris used the average home cost, monthly mortgage, and the minimum salary to determine which area is most affordable for working-class folks. She recommended that no more than 28% of gross (i.e., before tax) monthly income go toward mortgage payments. The sweet spot of home affordability was areas where people paid less than 28% of their incomes towards their mortgage. However, she said,

“We did not take into account PMI, taxes, down payment size, or home insurance, since those differ greatly based on individual circumstances and loan type.”

.. and being a dream, the bottom 90% of Americans need to be asleep to believe in it, or they will either wind up renting for life or own an unaffordable home and be house poor. Morris lists the ten least affordable cities for homeownership:

How times have changed over the course of the past couple of decades as taking part in The American Dream now means you must move in Detroit – not exactly an all inspiring metro area.

Living the American Dream of runaway home prices juiced by Fed policy. Every time I hear word “inclusive,” I think to myself: Why don’t they start by ceasing policies that exacerbate the k-shaped entry price to put roof over all Americans’ heads? Too easy?@Quillintel@SoberLook pic.twitter.com/zX8QJSfGRA