Illinois’ Latest Use Of Taxpayer Money As Anti-Republican Political Club

Submitted by Mark Glennon of Wirepoints

Illinois Treasurer Michael Frerichs and a group of 29 other state financial officials recently sent letters to six of the nation’s largest private sector money managers in a transparently partisan attempt to bully them out of supporting Republicans.

The effort is a misuse of the power that adheres to managing billions of dollars of taxpayer money and sets a dangerous precedent that might well invite retaliation in the same form by Republicans holding similar offices or from a Republican successor to Frerichs. It’s an attempt by incumbent officeholders to control much of the money that controls politics.

Unfortunately, the effort got no scrutiny and only a few articles in the national media, including these in The Washington Post and Bloomberg.

Frerichs oversees the investment of some $35 billion of Illinoisan’s money. Together with the other treasurers, public fiduciaries and pension trustees who signed the letter, over a trillion dollars of public money is represented.

Nothing political at all, the officials are claiming, they are just doing their best to maximize financial returns.

Take a closer look to see if that’s believable.

One implicit threat about contributions to those candidates is clear in the first sentence of the letters. “[With] assets under management of over $1 trillion,” Frerichs and the others wrote, “we are frequently asked to evaluate asset allocations to asset managers.”

And they ask in the letter, “Will [you] forswear corporate political spending (direct or indirect) to the 147 members of Congress who voted to overturn the results of a free and fair democratic election on January 6th, 2021?”

In other words, change your political contributions or, well, they didn’t need to spell it out.

There’s much more to it. The letters are a broad attempt to bully the money managers into partisan changes in their political activity.

You can’t even get past the letterhead, shown here, to see that broader, partisan agenda. It’s brazen, carrying the names of Service Employees International Union and Majority Action.

It’s so brazen you have to wonder what they were thinking. 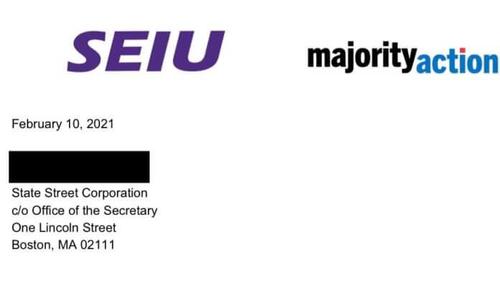 SEIU is one of the largest public unions in the nation and huge Democratic benefactor. It is listed among Frerichs’ ten biggest campaign contributors in 2018, the last time he ran.

Majority Action, which spearheaded the effort behind the letter, is a progressive outfit focused on publicly shaming corporations into supporting like-minded causes, particularly on global warming.

Why are SEIU and Majority Action on the letterhead if not to signal general support for them as well?

Are the letter writers sincere when claiming they are only concerned about their investment returns and election certification?

Objections to presidential vote certifications are not uncommon. Democrats have objected to all three certifications of Republican wins since 2000 – Donald Trump in 2016 and George W. Bush in both 2000 and 2004. When Sen. Barbara Boxer objected to certification of Bush’s Ohio certification in 2004, Illinois Sen. Dick Durbin said on the Senate floor, “I thank her for doing that because it gives members an opportunity once again on a bipartisan basis to look at a challenge that we face not just in the last election in one State but in many States.”

Durbin’s point was fair, and Democrats had every right to make those objections. The letter writers undoubtedly didn’t object, nor are we aware of any objections they had to any of countless elected officials who stood silent and sometimes encouraged the political violence we saw over the summer.

There’s another oddity about the letter. Among its signers is Aaron Ammons as trustee of SURS, one of Illinois’ pensions, the State University Retirement System.

SURS, like most Illinois pensions, is among the walking dead in actuarial terms, being only 39% funded. Does anybody really think that saving democracy from insurrectionists is what SURS trustees should be focused on?

Ammons, too, is a progressive Democrat. He’s a former chapter president of SEIU. Appointed by Gov. JB Pritzker, he was elected Champaign County Clerk in 2018 and co-founded the Champaign Urbana Citizens for Peace & Justice. He is married to Democratic State Representative Carol Ammons.

The letter isn’t entirely focused on campaign contributions to those who voted against the vote certification. It addresses campaign donations in general and asks what broader reforms the letter’s recipients will undertake to rigorously reassess their “corporate political spending and evaluate whether payments serve to advance the company’s business objectives and a stable democracy.”

But that’s an entirely political judgement that neither Frerichs, Ammons nor the other signers are charged with imposing. Even if they are sincere in their claims about what’s good for rates of return in the long run, suffice it to say that opinions vary.

Those broader topics and questions belie the letter’s real purpose, which is to tell the big money folks to toe the party line — or else. From the letterhead down, its recipients would be fools to miss that full message. It’s not about maximizing returns, it’s about telling them where to use their financial clout politically.

We are fortunate that, at least so far, public officials with different political views than the letter writers haven’t tried the same tactic. They well might, as might a Republican successor to Frerichs.

A bad precedent has been set. Money, unfortunately, already controls much of government. But if this precedent is followed, we would have incumbent politicians effectively controlling much of the money that controls politics, pushing and pulling in different directions.

The letter is the most recent on a list of ways Frerichs has misused the public’s money for partisan purposes. Those stories and some on Frerichs’ other doings are in our articles linked below.