Authored by Ted Dabrowski and John Klingner via Wirepoints.org,

Illinois’ pension debt, already the nation’s biggest, grew to $317 billion in 2020 according to a new report from Moody’s Investors Service.

The Moody’s report confirms Wirepoints’ prediction made last April in “Coronavirus impact may push Illinois state pension debt to over $300 billion.” We warned that the economic fallout from COVID and record-low interest rates would cause the state’s pension shortfall to jump to $312 billion.

Now Moody’s says the shortfalls of Illinois’ five state-run pension funds, based on the credit agency’s own calculations, jumped by $56 billion, up from $261 billion in 2019. 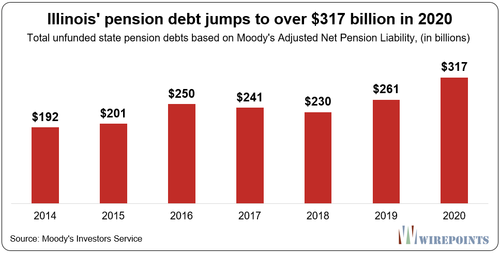 Moody’s report also highlighted Illinois’ extreme “outlier” status, warning that “Illinois’ pension liabilities are the highest among the 50 states” and that the state’s total debts “are at or near the top by almost any measure.”

The $317 billion in debt pushes Illinois’ pension crisis into a whole new level. Illinois’ debt now amounts to roughly 37% of GDP. That’s up from 26 percent Moody’s reported the year before.

In total, Illinois’ long-term debt from borrowing, pensions and retiree health is expected to equal 48 percent of the state’s GDP in 2020, up from 38 percent the year before.

The $317 billion shortfall is more than double the state’s official debt estimate of $144 billion. The difference is driven by differing investment return expectations between the financial markets and the state.

The state assumes the pension funds will continue to earn an average of nearly 7 percent a year, while Moody’s lowered its assumptions for 2020 to just 2.7 percent: “the FTSE Pension Liability Index, a high-grade corporate bond index Moody’s uses to value state and local government pension liabilities, fell to 2.70% as of June 30, 2020, from 3.51% the prior year.”

Moody’s also reported that the asset-to-payout ratio for the state’s funds are now equal to about seven years’ worth of payouts.

That’s down compared to Wirepoints’ report on asset-to-payout ratios we released last year in this report: COVID-19 pushes nation’s weakest public pension plans closer to the brink: A 50-state survey.

Here’s what we reported then. 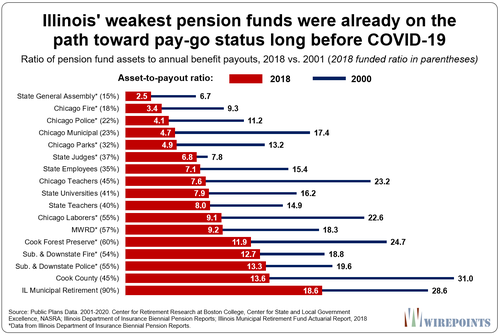 The ratios in Illinois have collapsed since 2000, creating increasing concerns about the funds’ solvency. Illinois is an extreme outlier nationally when it comes to this solvency ratio.

Healthy funds have ratios that range from 25-40 years’ worth of payouts. 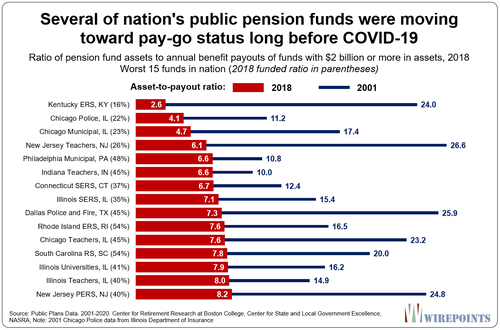 Moody’s conclusion echoes Wirepoints’ own summary of the state’s situation: “Illinois is an outlier among states both for fiscal challenges from pension expenses and for its limited capacity to modify the benefit packages that drive these expenses.”

This latest data shows why Speaker Welch’s idea to use a progressive income tax to pay for pensions will only make Illinois’ crisis worse. No amount of tax hikes can catch up with the ever-increasing debt. It’s simply throwing good money after bad.

Until Illinois passes a constitutional amendment to change its “limited capacity to modify the benefit packages,” Illinois will continue to spiral downward.

Oceania Takes On Eurasia And Eastasia