Authored by Patrick Cockburn via The Unz Review,

Great dollops of hypocrisy invariably accompany expressions of concern by outside powers for the wellbeing of the Syrian people. But even by these low standards, a new record for self-serving dishonesty is being set by the Caesar Civilian Protection Act, the new US law imposing the harshest sanctions in the world on Syria and bringing millions of Syrians to the brink of famine.

Supposedly aimed at safeguarding ordinary Syrians from violent repression by President Bashar al-Assad, the law is given a humanitarian garnish by naming it after the Syrian military photographer who filmed and smuggled out of the country pictures of thousands of Syrians killed by the government. But instead of protecting Syrians, as it claims, the Caesar Act is a measure of collective punishment that is impoverishing people in government and opposition-held areas alike. 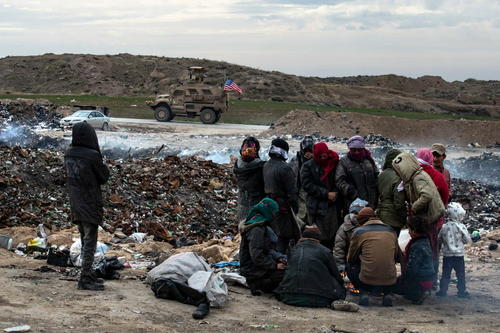 Bad though the situation in Syria was after 10 years of warfare and a long-standing economic embargo, the crisis has got much worse in the nine months since the law was implemented on 17 June last year. It has raised the number of Syrians who are close to starvation to 12.4 million, or 60 per cent of the population, according to the UN.

Already, more than half a million children under the age of five are suffering from stunting as the result of chronic malnutrition. As the Syrian currency collapsed and prices rose by 230 per cent over the last year, Syrian families could no longer afford to buy basic foodstuffs such as bread, rice, lentils, oil and sugar.

“The war of hunger… scares me more than the war of guns,” says Ghassan Massoud, the Syrian actor famous for playing Saladin in the 2005 Ridley Scott film Kingdom of Heaven. A politically neutral and popular figure in Syria, Massoud is quoted as saying that government employees are earning 50,000 Syrian pounds ($13/£9) a month when they need 800,000 Syrian pounds to survive. “I am a vegetarian but I do not accept that a citizen is not able to eat meat because a kilo costs 20,000 Syrian pounds.”

The Caesar Act threatens sanctions on any person or company that does business with Syria and thereby imposes a tight economic siege on the country. Introduced just as the Covid-19 epidemic made its first onset in Syria last summer and soon after the implosion of the Lebanese economy to which Syria is closely linked, the law has proved the final devastating blow to Syrians who were already ground down by a decade of destruction.

It was supposedly aimed at Assad and his regime, but there was never any reason to believe that it would destabilize them or compel them to ease repression. Since they hold power, they are well placed to control diminished resources. As with the 13 years of UN sanctions directed against Saddam Hussein between 1990 and 2003, the victims were not the dictator and his family but the civilian population. Iraqi society was shattered, with results that are still with us, and the same is now happening in Syria.

“Sanctions and other measures that are meant to penalise repressive rulers usually wind up hurting ordinary people the most,” concludes the Brussels-based International Crisis Group.

I wrote in the 1990s that sanctions were killing more Iraqis than Saddam, but the defenders of the embargo would claim that its critics were aiding the Iraqi leader and, if there really was significant civilian suffering, it was all his fault. The same discredited arguments are now used today to justify the Caesar Act, though it hits people living in the 30 per cent of Syria outside Assad’s rule just as much as it harms them in the 70 per cent under his control.

A university teacher in government-held Latakia on the Mediterranean coast says that she is trying to survive on a salary worth the equivalent of $18 a month. She is eating less and depends on fruit and vegetables from relatives who are farmers. In Damascus, people say that Covid-19 spreads easily because they do not have the money to buy both food and masks.

Syrians digging through trash in front of oil wells occupied by the US military on a network that actively campaigned along with its state parent for the dissolution of the Syrian state https://t.co/UPIsMCRX3g

In rebel-held Idlib, where people face both bombing and Covid-19, one woman said that she thought that 95 per cent of people were worse off because of the pan-Syrian economic collapse. Even in former Kurdish areas now occupied by the Turkish army, the inhabitants are paying to be smuggled across the border into Turkey where they can get jobs that pay them a living wage.

The newscasts and overviews of the Syrian conflict broadcast or published this week on the 10th anniversary of the start of the Syrian conflict in March 2011 make little mention of the Caesar Act and the merciless consequences of sanctions. This is par for the course because embargoes do not kill dramatically or publicly like bombs and bullets – and they can even be portrayed, as they are in the present instance, as a non-violent measure designed to help civilians.

Syria is locked into a toxic stalemate in which the main players are outside powers who consult only their own interests whatever their tear-stained protestations to the contrary. Looked at from a strictly military point of view, Assad, backed by Russia and Iran, has won the war and controls most populated areas. The Kurds, backed by the US, hold a large chunk of northeast Syria, but they have been ethnically cleansed from two enclaves by Turkey. The Turks protect several million Arab civilians opposed to Assad crammed into part of Idlib province close to the Turkish border.

The US and its allies may denounce Assad but it is a long time since they thought it feasible, or necessarily in their interests, to overthrow him. They fear that if he did fall, Syria might collapse into Libyan-type chaos and be taken over by jihadis. But since they also want to deny Assad, Russia and Iran a complete victory, they are content to see the present grim situation long continue.

An argument in favor of sanctions is that they would ultimately force Assad to make concessions and bring an end to the war. But they have had precisely the opposite impact according to the UAE, which is likely to play a central role in any negotiations to bring about a permanent peace. Earlier this month, the foreign minister Sheikh Abdullah bin Zayed al-Nahyan declared that “to keep the Caesar Act as it is today makes this path [towards resolving the crisis] more difficult”.

US Caesar sanctions are explicitly aimed at preventing Syria’s reconstruction. This follows a 10-year Dirty War, fueled by US, that destroyed the country. It’s pure sadism, which is why people of conscience oppose it, rather than offer semantic evasions: https://t.co/QLzx177ChY pic.twitter.com/RTLJC109Nw

President Biden does not want to be sucked further into the Syrian morass and is unlikely to take the initiative. Much of the US foreign policy establishment think that the US made a mistake after 9/11 in focusing on wars in the Middle East when it should have been confronting China.

Allowing Syria to fester while enforcing an economic siege embodied in the Caesar Act means that millions of Syrians are sinking ever deeper into misery and despair. A state of “no peace, no war”, in which there are no final winners and losers, is attractive to foreign powers, but Syria at present is like a rickety house of cards that may collapse at any moment.

One Year After His Death, John McAfee’s Corpse Still Being Held By Gov’t, Fueling Claims Of ‘Cover Up’