The global semiconductor shortage continues to put significant pressure on the auto industry, where manufacturers are rushing to try and find how they can fix (and in the future back up) their supply chains.

Major players like VW, Toyota and GM are still suffering from a shortage of chips that are becoming more common in everyday vehicles. The drain on the supply chain has come from a corresponding rise in the sales of gaming consoles, TVs and computers – mostly as a result of the pandemic. The chips are now being used in everything from vehicle entertainment centers to anti-lock brakes.

Carlos Tavares, chief executive of Stellantis, told the Financial Times: “I am here to protect the fact that my company is treated fairly. I will look for all possible solutions. If I need to I will fight back [to ensure its chip contracts are met].” 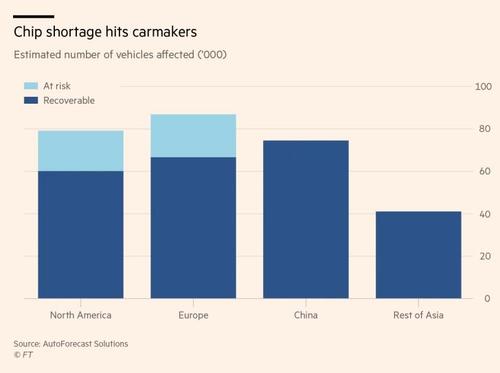 The unexpected disruption is the first time the industry has truly thought long and hard about the supply chain it uses for semiconductors. Only about 10% of semiconductor fabrication plants are used for automotive parts, FT notes. Since there is no “quick fix”, the shortage is expected to drag on for “at least” 6 months. Companies like Taiwan Semiconductor are, at the same time, still trying to address fallout from U.S. sanctions.

One China based supplier told FT: “The sanctions meant some clients redirected their orders from SMIC to other places, such as TSMC. Inside the industry, we are all pretty panicked, because the scope of the chip shortage is too big, and affects too many types. In the short term, we can’t see any way of resolving it.”

As a result, more than 280,000 vehicles have already been put on hold. As many as 500,000 vehicles could be affected in total, according to IHS market forecasts. 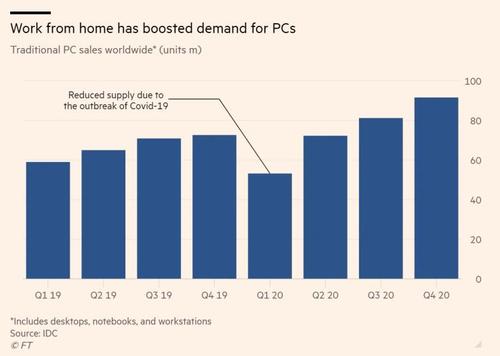 Richard Dixon, senior principal analyst at IHS Markit, added: “Everything is run so tightly in semiconductor fabrication plants that you always get this issue when there is a demand surge especially after a downturn.”

Automakers are left scrambling, trying to make sure that the chips they do have are being used in their most profitable vehicles, the report says. At the same time, chipmakers like NXP and Renesas are looking to increase prices – not only as a result of the demand, but as also as a result of the rising cost of raw materials. And rising costs could be a small problem compared to where some analysts think the next supply chain bottleneck is going to come from.

“After semiconductors, the next one is going to be potentially when we run out of rare-earth materials to make batteries. There is always that next thing that they have got to keep their eye on,” said Joseph McCabe, chief executive of AutoForecast Solutions.

Recall, just days ago we noted that VW lost production of “tens of thousands” of vehicles due to the chip shortage.

VW’s China head, Stephan Wollenstein, commented Wednesday: “It was hurting us already in December and we lost some 10,000 cars since then simply because we lost 50,000 cars in production in December because of some chips.”

For VW, the impact has been felt the most in vehicles that use the automaker’s Electronic Stability Program, “a system of sensors that works with a car’s Anti-lock Braking System to prevent the wheels seizing up after an unexpected swerve.”

“You see how vulnerable our industries are if only one chip is missing. This will unfortunately continue in the first quarter,” Wollenstein continued.

China is the world’s largest auto market and a critical market for VW, who has about 40% of its vehicle operations in the country. In China, VW delivered 3.85 million cars in 2020, down 9.1% from the year prior as a result of the pandemic.

2021 was thought to be a year where many automakers could play catch-up, but the chip shortage could stand in the way of an easy recovery for some automakers. We first reported just days ago that the ongoing global chip shortage was wreaking havoc with the auto industry, which has become far more reliant on semiconductors due to “smart cars”, than it ever has been.