In every century the same thing happens at one point or another. Society loses the plot and gets caught up in a mania, a grandiose exercise in self delusion. It can be political, it can be religious, and yes it can be economic. Sometimes these manias are confined to regions or small groups of people, sometimes they are vast in reach and impact and have global consequences. We can all think of examples. Religious? How about witch burnings? Politics? How about Nazism? Economics? How about all the manias that had fervent believers and adherents that with the hindsight of time were completely insane? The South Sea Bubble, the Tulip mania, the 1929 mania, etc. All of these bringing about vast social instability versus the previous status quo with often disastrous consequences. 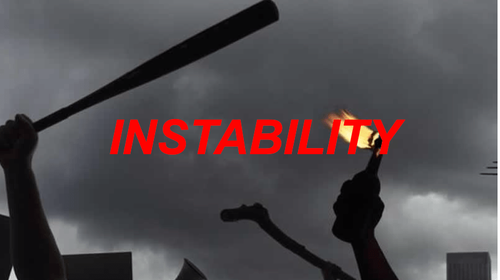 And whatever we got going here is now approaching a similar frantic delusion that appears to infect everyone.

All of these manic periods have something in common: Believing in something absolutely even though it is either completely wrong or unrealistic. Seeing reality becoming untethered.

I’ve long argued that central banks aiming to be a stabilizing force are actually bringing about societal instability. Occupy Wall Street, Black Lives Matter, the storming of the Capitol, angry Trump voters, angry Democrat voters and yes even Gamestop reddit buyers may all have different causes and triggers and motivations, but they actually have one thing in common: They are angry, angry at a system that has screwed them over, a sense of deep pervasive injustice and inequality, a fissure that keeps widening with every central bank intervention program.

Think I’m kidding? Here’s John Authors via Bloomberg who sees anger as part of this picture:

“The people investing today are driven by righteous anger, about generational injustice, about what they see as the corruption and unfairness of the way banks were bailed out in 2008 without having to pay legal penalties later, and about lacerating poverty and inequality. This makes it unlike any of the speculative rallies and crashes that have preceded it.”

Bitcoin? It too has positioned itself as rage against the establishment. See, it’s all part of the same thread, needle and trade.

Gamestop of course has the added benefit of seeing select billionaires enjoying fueling the flames:

I see we’ve reached the part of the bubble where billionaires are pumping small cap momentum stocks via their Twitter feeds with immediate effect on prices. pic.twitter.com/XrvWLlMA2E

The great gamification of the stock market. Anything goes:

Oh the hypocrisy of it all, if there was an organized effort to take down a stock price and aided by billionaires via their twitter feeds the SEC would be all over it & the outrage widespread, but because it’s just squeezing a short hedge fund it’s all glee & giggles.

We reach a point where nothing matters. Valuations, fundamentals, forward multiples who cares. Just create short squeezes in everything and it’s working. For now. After all the most shorted stocks are flying to the moon never mind that there are fundamental reasons as to why there are short positions in these stocks to begin with: They are shitty companies. Gamestop being one of them.

And the hallmark of any bubble: It’s infectious and it’s easy to get caught up in it. The prospect of massive wealth gains from nothing is causing millions to join the fray in the ultimate fomo trade: We can all become rich overnight.

And that’s how bubbles burst, everybody is long the same trade until it collapses. What about the systemic risks? One hedge fund blows up it’s a fun headline, multiple hedge funds blow up and it can cause a ripple of financial instability. May I remind everyone of 2008?

Yes it is temping to get caught up in a mania, but there is a fine line between responsible financial journalism and financial sensationalism and when you overtly endorse and justify such manias by throwing out the pretense of financial analysis and make everything about permanent multiple expansion based on imagined future money flows you cross that line and we see this everywhere now. That’s how manias feed on itself. The price action becomes impossible to rationalize with fundamentals and so new unrealistic narratives are invented to justify the price action.

Everybody was a genius in 2000 and the apologists will run people off the cliff counting on the fact that ultimately the Fed bails out bad calls.

These are dangerous times  both for longs and shorts as no one can know when the bubble pops and how quickly it’ll collapse on its own weight.

Every bubble has its moment of, ok maybe this is stupid, maybe this is getting too far, maybe now is the time to take some money off the table and then suddenly selling begets selling and the whole thing collapses.

I don’t know if this is the moment but it might as well be, indeed some are getting concerned at precisely this moment:

The market is at a ‘speculative peak,’ money manager says as Reddit traders fuel GameStop, Apple (via @ETFEdgeCNBC) https://t.co/jWehts8xRe

Perhaps a sign, perhaps not. We can only know in hindsight.

For now the mood is this:

Best of luck everyone.

71% Of Eligible Gen-Zers Don’t Qualify For Military Due To Obesity, Criminal Records And Other Reasons