Iran already raised alarm bells in Tel Aviv with it’s recent declaration that it will enrich uranium to 20%, causing Israeli Prime Minister Benjamin Netanyahu to again vow that “Israel will not allow Iran to produce nuclear weapons” – as he said on Monday. There are now fears Israel could mount a preemptive strike on the Fordow enrichment complex.

At the same time, Iran’s parliament voted to mandate that among the Islamic Republic’s official foreign policy goals is the destruction of the state of Israel. The mandate was passed on the anniversary of Qassem Soleimani’s assassination, which was Sunday.

The new mandate aims “to destroy the usurping Zionist regime” as well as “[break] the siege of Gaza by sending basic goods from official naval bases to Gaza in exchange for money or free of charge,” according to Foreign Policy. 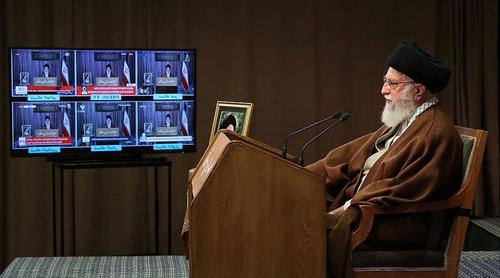 Israel has long condemned Iranian covert support to Hamas and other Islamist factions in Gaza. Hezbollah in Lebanon is also a major thorn in Israel’s side which receives even more Iranian funding, weapons, and support.

The new law further means Iran must fight for the “Right of return of Palestinian refugees” and the “Liberation of the Golan Heights” through establishing “welfare-economic-security and infrastructures.”

These measures are in response to the “terrorist act” of the January 3, 2020 assassination of IRGC Quds Force commander Qassem Soleimani.

In past statements calling for Israel’s destruction, Iran has sought to distinguish between targeting Israel and targeting Jews.

Eliminating the Zionist regime doesn’t mean eliminating Jews. We aren’t against Jews. It means abolishing the imposed regime & Muslim, Christian & Jewish Palestinians choose their own govt & expel thugs like Netanyahu. This is “Eliminating Israel” & it will happen.#FlyTheFlag

The following morning after the anti-Israel legislation, government spokesman Ali Rabeie announced via state media: “A few minutes ago, the process of producing 20% enriched uranium has started in Fordow enrichment complex.”

The question now remains whether this could trigger either US or Israeli aggression, which happened the last time Iran declared it would enrich to 20% (a decade ago). Many analysts further believe it was Israel behind a recent “sabotage” campaign targeting Iranian nuclear energy and military sites over the past year, particularly the July 2nd Natanz fire and blast which destroyed part of the complex.