On Tuesday, Iran’s defense minister said the country must be prepared to face nuclear, chemical, and biological attacks.

“We should be prepared to defend our nation against all threats and whatever the enemy may one day use as an offensive tool, including chemical, nuclear and biological weapons,” said Gen. Amir Hatami, according to Iran’s Fars News Agency. 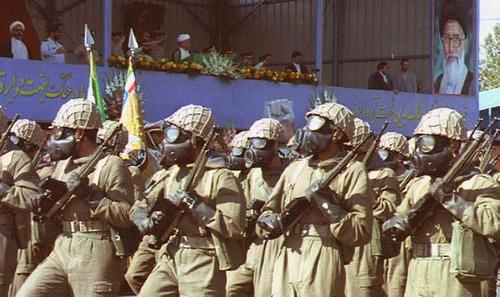 Hatami made his comments on the 33rd anniversary of a chemical weapons attack by Saddam Hussein on Iraqi Kurds in Halabja, Iraq. During the Iran-Iraq war that raged from 1980 to 1988, Hussein frequently used chemical weapons against Iran, sometimes with US support.

Declassified CIA documents revealed that in 1988, the US shared intelligence with Hussein to show the location of Iranian troops, knowing he would use lethal gas against them.

The documents revealed the US had firm evidence Hussein was using chemical weapons as early as 1983.

Today is the 33rd anniversary of the Halabja chemical massacre, part of Saddam Hussein’s genocide against Kurds.

The Reagan admin knew Iraq was using chemical weapons against Iran, but continued to supply targeting data and blamed Halabja on Iran. https://t.co/xB29S4MPg0

Besides Iran’s history of being targeted by chemical weapons, Iran is also constantly threatened by Israel, the only nuclear-armed state in the Middle East.

While Israel frequently takes covert action against Iran, Israeli officials have been hinting at a larger attack on Tehran’s civilian nuclear program if the US returns to the Iran nuclear deal.

(WATCH) Trump: “The honor of a lifetime”