The consensus is that asset inflation is unstoppable and forever. History begs to differ. 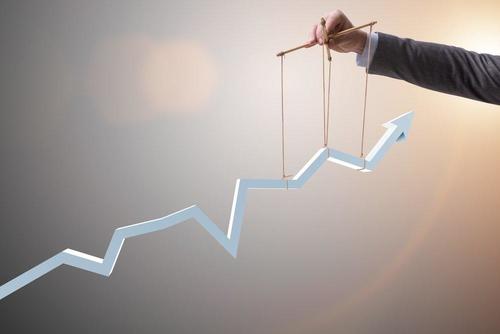 Not unsurprisingly, people want a binary option: do we get deflation or inflation? Unfortunately, reality is messy.

Broadly speaking, globalization is deflationary as capital seeks the lowest cost labor, parts and materials, the least stringent environmental standards and the most corrupt governance to maximize profits by any means available (in this case, exploitation and corruption).

Wages lose purchasing power as every labor force competes with the cheapest available pool of global labor, and domestic companies must lower prices or face obliteration by the global corporations.

Broadly speaking, financialization is inflationary as the costs of services increase as financialization enables monopolies and cartels to dominate entire sectors. Once they control the sector, they increase prices while lowering quality to maximize profits by any means available (in this case, monopoly, cartels and political corruption). As the profits gush in, corporate monopolies and cartels can “invest in corruption” by using a sliver of their profits to buy political favors and protection.

Financialization lowers the cost of credit to corporations and financiers, giving the largest entities an unmatchable competitive advantage: they can borrow immense sums at near-zero cost and use this money (or newly issued stock) to buy competitors, insuring their monopoly won’t be challenged by either regulations (since politicos and bureaucrats have been bought off) or competitors (all bought out with “free money”.)

While many hold that inflation is always a monetary phenomenon, real-world scarcities are also inflationary. If you were waiting in a long line at a gas station in 1973, hoping to get a tank of gas at only double the price of a month earlier, you’ll know that scarcity is absolutely marvelous at sending price soaring regardless of what’s happening with the money supply.

So inflation can be driven by either or both monetary and scarcity dynamics.

Enter the pandemic. Needless to say, restrictions in travel and gatherings are deflationary in travel-leisure-dining sectors as airlines lower prices to compete for a shrinking pool of passengers and surviving restaurants suppress prices to attract scarce customers.

As millions of workers lose their jobs and depend on unemployment, the insecurity of future income weighs on overall consumption.

But lowering the cost of credit and incentivizing monopolies and cartels to expand their control doesn’t actually help the economy. Enabling rapacious monopolies and cartels is systemically inflationary, while lowering the cost and availability of credit also increases the attractiveness of automation as a means of lowering labor costs, a dynamic that is deflationary as lower wages equals lower consumption.

The reality is relatively few gig economy workers earn a middle-class income working 40 hours a week. The large-scale reduction of wage and benefit security–i.e. the transition to a precariat work force–is highly deflationary in terms of wages and consumption, as precariats cannot count on future earnings being reliable or sufficient.

The political “solution” is Universal Basic Income (UBI) as a means of supporting consumption. But supporting the consumption of essentials doesn’t magically incentivize innovation or the expansion of capacity and real-world production.

Meanwhile, the Federal Reserve will continue giving unlimited “free money” to corporations and financiers to increase the concentration of financial and political power in the hands of the few at the expense of the many. This fuels the dominance of corporations and financiers and increases the risks of monetary over-reach, which introduces the potential for a non-linear sudden and unpredictable explosion of monetary-driven inflation.

All of this sets the stage for both monetary and scarcity inflation. Monopolies and cartels are free to exploit their stranglehold on the nation by jacking up prices and reducing quality (while the bought-and-paid-for political class theatrically wrings their hands while skimming millions in campaign contributions). This is rabidly inflationary.

Since there are few incentives to expand real-world capacity and production, this sets the stage for scarcities in essentials and non-essentials alike. With Peak Globalization in the rearview mirror, the deflationary forces of globalization are ebbing.

The fly in the ointment is speculative bubbles always pop. All the inflation in the system has flowed into excessive speculation, which has inflated unprecedented bubbles across most asset classes. When these all pop, the results are deflationary as the wealth effect reverses and over-leveraged corporations default and/or go bankrupt. 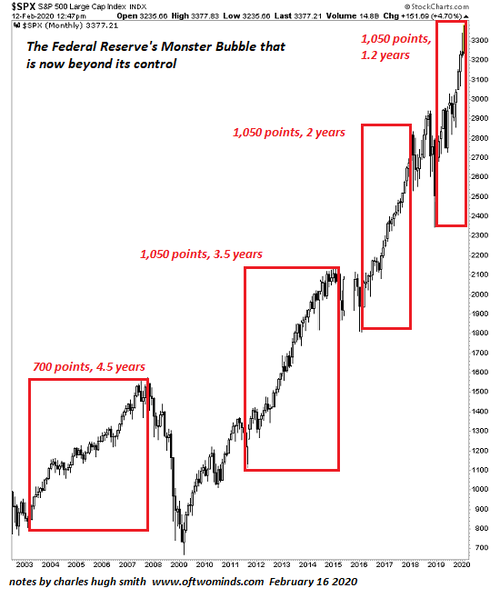 I marked up this chart of the S&P 500 about a year ago, and since then the market crashed and then soared to new highs (SPX 3,826). The basic message here is extremes get more extreme until the rocket runs out of fuel–something the consensus now claims is “impossible.” The consensus is that asset inflation is unstoppable and forever. History begs to differ.

Transgender: The Left’s Instrument of Ruin and Destruction